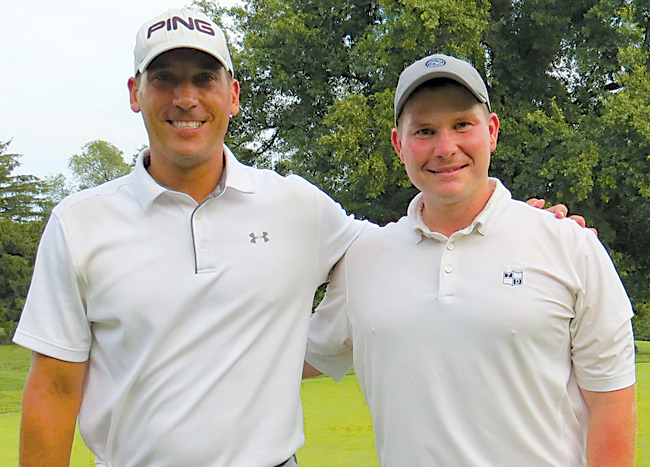 When covering area golf tournaments, it’s always safe to pencil in the name Anthony DeGol as one of the favorites.

DeGol and Artie Fink Jr. have been dominant in regional two-man best-ball events in recent years. They won at Sinking Valley on July 14 and are paired at Iron Masters next weekend and Summit the following weekend.

DeGol, a former Penn State golfer from Hollidaysburg, hooked up with Trent Karlik of Robinson Township (suburban Pittsburgh) this past weekend, and the duo captured the 2019 Reliance Bank Park Hills Classic by beating Dan Brown and Patrick Rohrbaugh, of the Harrisburg area, on the 20th hole Sunday afternoon.

“We played a West-Penn event seven or eight years ago,” DeGol offered when asked about his pairing with Karlik. “We played together and kind of became buddies throughout the round.

“We kept in touch here and there, and when this tournament came up, I knew I wanted to play with him in something and he felt the same way,” DeGol continued. “I asked him and we made it work.”

DeGol and Karlik teamed up at Park Hills last year, but the results weren’t good.

“We had an unfortunate loss in the first round last year,” DeGol noted.

Not this time, though.

DeGol and Karlik won Friday and Saturday to advance to Sunday’s match-play semifinals where they defeated the local pair of Chris Perry and Mike Macionsky, the 2014 champions. Brown and Rohrbaugh reached the finals by beating 2009 champs Ralph Litrenta and Joe George in the semis.

“They (Brown-Rohrbaugh) won the last two years and they played like they were going to win three years in a row,” DeGol said of the finals. “It was a very good match.”

In fact, DeGol and Karlik needed a furious finish to win.

“We were down one (stroke) coming into 18,” said Karlik, whose strength was the first 10 holes. “(DeGol) cleaned up at the end.

“Anthony ripped a drive right down the middle of the fairway. I was off to the right side and I saw a 4-iron rope coming up to the green. I saw it bounce twice and I knew it was like 10-15 feet from the hole … it definitely was the shot of the day because it was do or die.”

Following DeGol’s birdie to tie the match, the teams parred the first extra hole, thanks to a Karlik 15-footer, before they went to the second hole.

“They had birdie opportunities and didn’t convert,” DeGol said of the first extra. “Trent stepped up and knocked it in for par.”

On the 20th hole, DeGol hit a big drive in front of the green, then a pitch to within seven feet and rolled it in for the win.

“It was his second-best drive after 18,” Karlik said. “I was a little worried about the putt, but he made it.”

“The Penn State guy’s swing came through at the end,” Karlik said of DeGol. “It was awesome.”

DeGol, 29, won the (Park Hills) tournament about 10 years ago, playing with Matt Moot of Johnstown.

DeGol and Karlik were pressured every match his past weekend. DeGol said one of the best matches he’s ever been part of was against Artie Fink and Todd Homan on Friday.

The event began with six flights of 16 teams each.

“Everyone played phenomenal golf,” DeGol said. “Everyone was coming at us as hard as they could and we made putts when we needed to.

“It’s been a great summer so far,” he added.