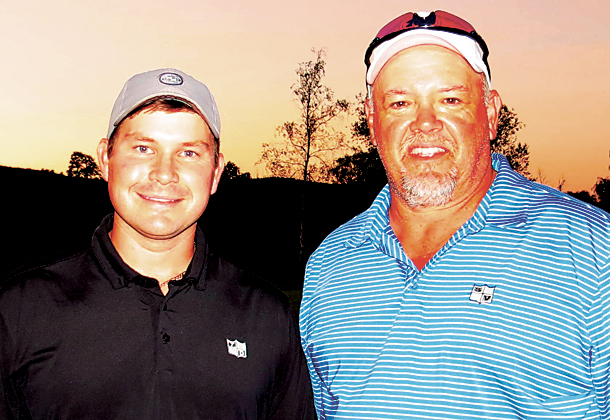 Photo for the Mirror by Ken Love Anthony DeGol and Artie Fink Jr. won at Sinking Valley on Sunday night.

TYRONE — The pin placements and firm greens made Sunday’s final round of the 47th annual Sinking Valley Classic two-man best-ball tournament a challenge for most competitors.

The pair, who won their ninth local best-ball title and first Sinking Valley Classic title since 2012, entered the final round of the three-day tournament with a six-stroke advantage and finished five strokes clear of runners-up John Handrigan and J.P. Stultz.

“I think the golf course setup actually helped us a little bit,” Fink Jr. said. “Basically, with a big lead, you’re just trying not to step on your own feet. It was all about getting the ball in the middle of the greens and trying to make some putts. The greens were firm, and the pins were tucked. That made it hard to get the ball close, so you just had to play to the middle and make a 20-footer. With a big lead, we didn’t think with the way the conditions were and as hard as the course was playing that anybody was going to shoot a really low number.”

Nearly every team from the top flight to the bottom one muttered something about how hard it was to knock anything close to the pin Sunday and keep it there as they turned in their scorecards.

“Everything was rock hard,” DeGol said. “You’d hit a shot, think it was good, and it would bounce over the green. The key was playing to 15 to 20 feet and hope to make a putt.”

Fink Jr. helped DeGol get through an early tough stretch when DeGol admitted he wasn’t playing as focused as he should have been with a large lead.

“My partner had to whip me into shape a couple times and make sure I was still in the game,” DeGol said. “We always have each other’s back. We play hard for one another and don’t want to let each other down. We’re both solid golfers, and we really shine when we need to.”

Fink Jr. attributed the six-stroke lead the pair entered the day with mostly to DeGol, who shook his head in denial.

“Anthony is the best player in Blair County,” said Fink Jr. as DeGol protested from their cart that Fink Jr. made more birdies than he did in the tournament. “I tried to contribute whenever I can, but he’s a solid golfer who doesn’t make a lot of mistakes.”

The first flight needed a playoff hole to determine the champion.

Lantz Thompson and his partner Andy Fouse watched Thompson’s son, Luke and his teammate Bobby Mort, make par on the ninth hole to force a playoff between the two teams.

The Thompsons weren’t playing together, because Luke and Mort were originally not playing in the tournament but were added when a team dropped out on Thursday. Luke Thompson and Mort were tied for the lead entering Sunday, but his father and Fouse caught them and won by making a birdie on the first playoff hole.

“It’s a good win,” Fouse said. “This is our ninth or 10th year, and we’ve never won it. It was also fun to play the other Huntingdon guys in the playoff.”

When asked if the Thompson family had anything on the line other than bragging rights Sunday, Lantz revealed he was going to be getting a ride home.

“(Luke) just got his permit, so I told him if he loses, he’s driving home,” Lantz Thompson said. “It was some hard conditions out there. We all played pretty great. It changed dramatically from the start of the week. Pin placements were hard and greens were firm.”