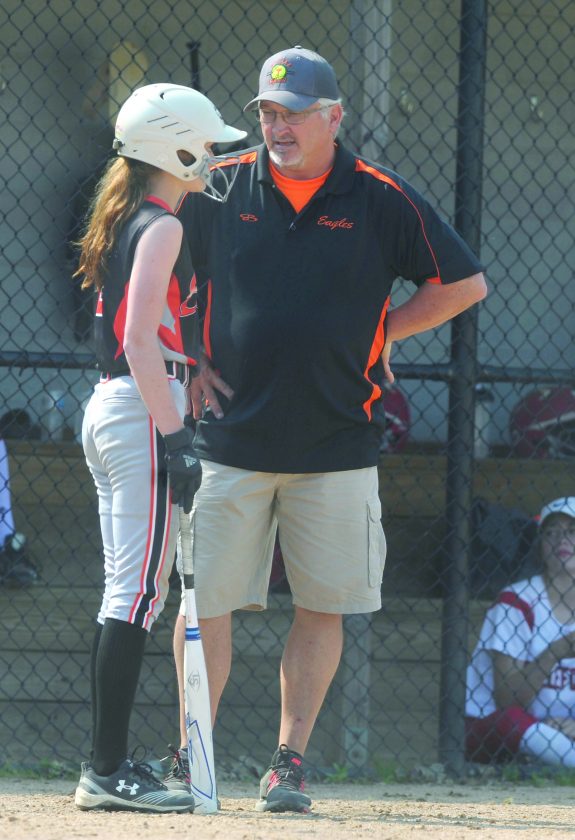 CRESSON — Trailing Bellefonte 1-0 in the fourth inning of the District 6 4A championship game, Tyrone’s Maci Brodzina rounded third and was all set to race home with the tying run. That was because Ally Jones hit a ground ball that headed for left field.

Bellefonte’s Emma DeHaas was having none of it, however.

The senior shortstop dove for the ball, snagged it cleanly and quickly threw to third to cut down Brodzina as she dove back into the base.

“I thought it was going through. I was ready to send her home and get our first run,” Tyrone coach Doug Myers said. “She made a great play. When you’re in a game like this, every play is crucial. They made a couple big plays.”

That play was the closest Tyrone came to getting anything off Lexi Rogers.

The hard-throwing sophomore no-hit Tyrone, striking out 10 and walking three, in a 2-0 win to give the school its 21st district championship and a berth in the state playoffs.

“When she’s out there, we always have a chance,” Bellefonte coach Travis Foster said of Rogers. “She’s come a long way. She overcame some injuries at the beginning of the year. She showed a lot of resilience, a lot of guts to battle through that.”

The Lady Eagles had another opportunity to break through against Rogers in the sixth when they put runners on second and third with one out.

After Maecy Tuskovich was hit by a pitch leading off the inning, Brodzina hit a ground ball to third, but the throw to second was dropped, putting runners on first and second with no outs.

Cate Baran bunted the runners over, but Rogers struck out the next batter then got a weak groundout to end the threat.

“She’s a great pitcher. She controlled us (Friday),” Myers said. “We couldn’t get the bats going, couldn’t get a key hit when we needed it.”

Baran matched Rogers for two innings, striking out the side in both the first and second, but Bellefonte was able to break through in the third.

Lily Gardner banged a double off the left field fence and tried for third when the relay was mishandled. The throw got past the third baseman and rolled along the Bellefonte dugout, allowing Gardner to score.

Baran struck out the side again in the fourth and pitched out of a jam in the fifth before Bellefonte extended the lead to 2-0 on a Sara DeHaas home run over the left center fence in the sixth.

“Sara hit a big home run,” Foster said. “When the lead’s one, you’re a little tight, but two when you’ve got two innings to go, we can really get after it, challenge hitters and just go out there and make plays.”

Tyrone’s season ends at 14-8. With just one senior of the team, the bulk of the team’s roster will be back to battle for a district championship next year.

“Our progam’s young. It was a privilege to be here, and our girls of proud of our season,” Myers said. “Obviously, we’re disappointed, but we’re going to keep building. I think we’re going to be pretty good.”