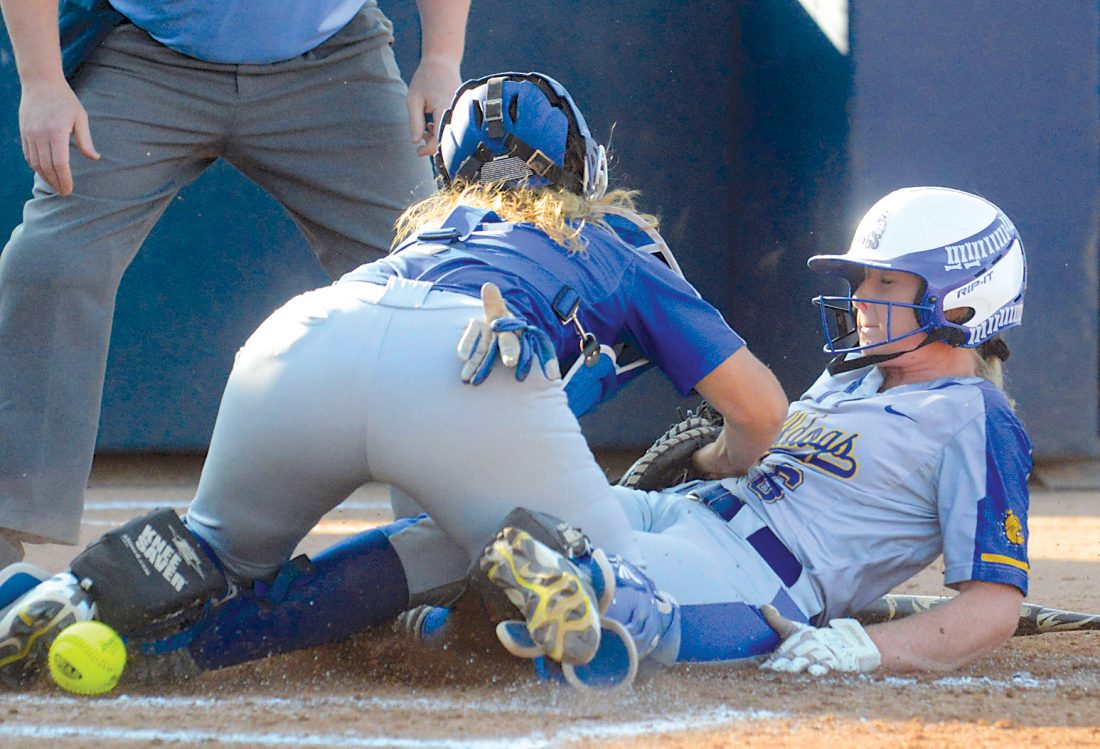 The Lady Bulldogs certainly looked at home on a sunny Monday evening at Penn State in the first round of the Class A state playoffs against a young Union team.

The Lady Bulldogs put offensive pressure on the Scotties in the first four innings, recorded 11 hits and eight walks in seven innings, took advantage of some shaky fielding by District 7 runner-up Union and withstood a seventh-inning rally to win, 11-7.

“I felt pretty confident going into this game,” sophomore cleanup hitter Haileigh Reed said after going 3-for-4 with 4 RBIs. “We hit and we get up. We try to take advantage as much as possible. We put the balls in play and make them make the mistakes. It feels amazing.”

“We watched the film of them playing West Greene, and we knew if we put some pressure on their defense, they would make some mistakes,” veteran C-K coach Mike Barbarini said, “and they did.”

C-K (20-4) advanced to the second round on Thursday against DuBois Central Catholic, a 14-4 winner over Leechburg in six innings, at a time and site to be announced.

C-K came out crisp – like it had played at Beard Field before.

“I think it helps us a lot,” Reed said of playing at PSU before. “The atmosphere the first time we were here probably got us nervous, but the whole way up here, no one was nervous. Everyone was confident going into this game.”

“We hit the ball all year,” Barbarini said. “We’re a good hitting team, and we put runs on the board.”

The Lady Bulldogs drew first blood with two runs in the second inning. After Madison Knisley walked and Madison Frye reached on an error, freshman Rebekah Claar chased them both home with a triple to right field.

“She’s a freshman, and we’re working hard to get her caught up with everybody else as far as experience-wise,” Barbarini said of Claar. “She’s played all year, so by now she should have enough experience to be one of the better hitters in our lineup.”

C-K built on that lead with three more in the third inning. Jazmin Kennedy scored on a Halaena Blakely wild pitch, and Reed followed with the first of her three hits — a single that scored Harleigh Cavender. Reed scored on a Knisely ground ball out.

C-K pitcher Olivia Bushore pitched three shutout innings, getting fine defensive plays from shortstop Emily Claar and Reed. The Scotties, though, broke through with two runs in the fourth on a Skylar Fisher triple and a wild pitch.

The Lady Bulldogs responded with five in the bottom of the fourth on three hits, three walks and an error. Reed followed Cavender’s RBI groundout with a two-run double to left field.

“I was just going out there looking for a hit to help my team get runs,” Reed said. “I was looking for a pitch and hoping to drive in some direction.”

“She’s been our rock all year,” Barbarini said. “She probably has over 50 RBIs now on the season. Every time we seem to need a bit hit, she delivers.”

After an error, Knisely’s two-run double to center made the score 10-2.

Three straight hits by the top of the Union lineup, which was sparked by leadoff hitter Gianna Trott’s three hits, made it 10-3 in the fifth.

“They are kind of tough,” Bushore said of the top of the Union lineup.

The Scotties (12-7) didn’t go down without a fight as they banged out three hits to start the seventh, including a leadoff triple by Racquel Zarlingo and an RBI single by Trott.

Barbarini pulled Bushore and inserted freshman Sierra Walters in the pitching circle. Union got to Walters for two runs, including one earned run after an error, but the relief pitcher induced a ground ball out for the final out.

“We have a veteran team, and we didn’t play like one in that last inning,” Barbarini said. “I expected more from my team than what we did there. We’re going to have to work in practice on our pitching and more on our defense so we can relax a little bit more and make those plays.