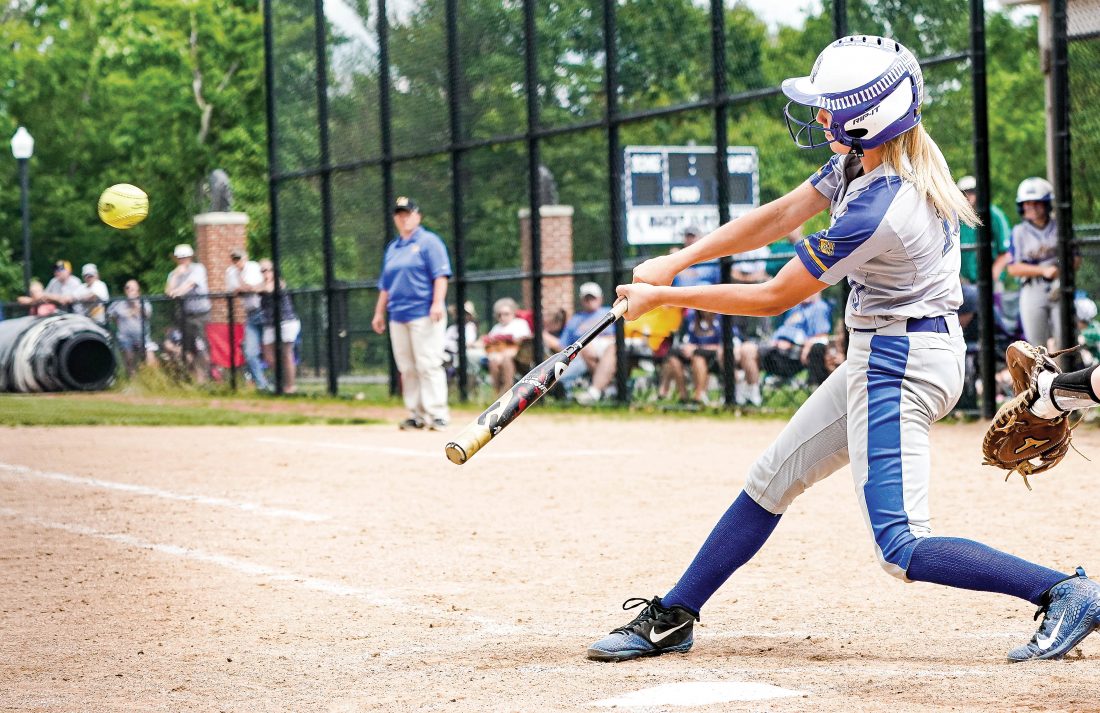 Photo for the Mirror by Chuck Meyers Harleigh Cavender belts a grand slam in the fourth inning for Claysburg-Kimmel on Thursday.

The Lady Bulldogs built a 5-2 lead in a PIAA Class 1A quarterfinal game against unbeaten DuBois Central Catholic on a fourth-inning grand slam by sophomore catcher Harleigh Cavender.

DuBois Central Catholic (25-0) broke a 5-5 tie with three straight hits in the ninth inning. Designated hitter Shyanne Lundy punched a single to left field, went to second on a bunt single by shortstop Shay Gulvas, and scored when Sickeri bounced a single into left field.

“I hit a ground ball between third base and shortstop,” Sickeri said. “I’m excited. I feel good. I was just trying to move the runners up, but scoring is even better.”

DuBois Central Catholic, as it has all season, got great production from the bottom of its lineup, as eighth-hitting center fielder Jordy Kosko scored three runs and hit a solo homer, and Lundy, batting as a designated hitter in the ninth spot, scored two runs and had a hit.

“Our eight-nine hitters scored five of our six runs,” DuBois Central Catholic coach George Heigel said. “That’s what we’ve done all season long, hit through the order. We did a nice job getting the people on base today.

“We did a nice job of getting the bunt down,” Heigel said of Gulvas’ ninth-inning effort. “Then the meat of our order came through.”

Claysburg didn’t execute a couple plays defensively in the bottom of the seventh inning that enabled DuBois Central Catholic to tie the game and send it into extra innings.

“They didn’t win the game as much as we lost it by not making plays,” said Claysburg coach Mike Barbarini, whose team concluded a 20-5 season. “Physically, we played a very good game, and we hit the ball hard, but mental errors beat us.”

Kosko reached on a Claysburg error to start the bottom of the seventh, and advanced to second on Lundy’s fielder’s choice-ground ball to the left side in which Claysburg didn’t get an out.

“Their first two batters didn’t hit the ball out of the infield,” Barbarini said. “We should have had two outs, and instead, there was first and second with nobody out.”

Gulvas and Sickeri then both flied out, but both runners moved up a base, to second and third, after Sickeri’s fly ball, when the cutoff infielder’s throw to third base was too late to get Kosko, and Lundy alertly sped into second base.

“Throwing the ball to third base instead of second base there was a big mental error, and their next girl got a hit and tied the game,” Barbarini pointed out.

That happened when senior pitcher Ashley Wruble drilled a single to center field to score Kosko and Lundy.

Claysburg appeared to have a stronghold on the game when the left-handed hitting Cavender belted a grand slam 200 feet over the left field fence in the fourth inning, scoring second baseman Rebekah Claar, center fielder Megan Hartman, and shortstop Emily Claar ahead of her and giving Claysburg a 5-2 lead.

“I didn’t swing hard, I just made contact,” Cavender said. “I didn’t think it was going out.”

Barbarini may have begged to differ.

“With the bases loaded, she got her pitch, and squared it up,” Barbarini said of Cavender.

DuBois Central Catholic pulled to within 5-3 on Kosko’s solo homer to left field in the fifth, setting the stage for the Lady Cardinals’ late rally.

DuBois Central Catholic took a 2-0 lead on Wrubel’s two-run double in the bottom of the third, before Claysburg punched across an unearned run in the fourth when third baseman Haileigh Reed walked, went to third on an error, and scored on the back end of a double steal.

“I thought our pitcher got stronger as the game went on,” Heigel said of Wrubel. “We beat a nice team today.”

“We would never have made it as far as we did without our seniors,” Barbarini said.

But Claysburg returns a good core of players, led by current sophomores Cavender, Reed and Bushore.

“We have a lot of young talent returning,” Barbarini said. “I’m looking forward to next season.”

Game notes: Home plate umpire Greg Spiker experienced repeated difficulties due to Thursday’s hot weather and was forced to depart the game in the bottom of the eighth inning, after a valiant effort … DuBois meets the winner of today’s West Greene-Clarion matchup in Monday’s semifinal round.