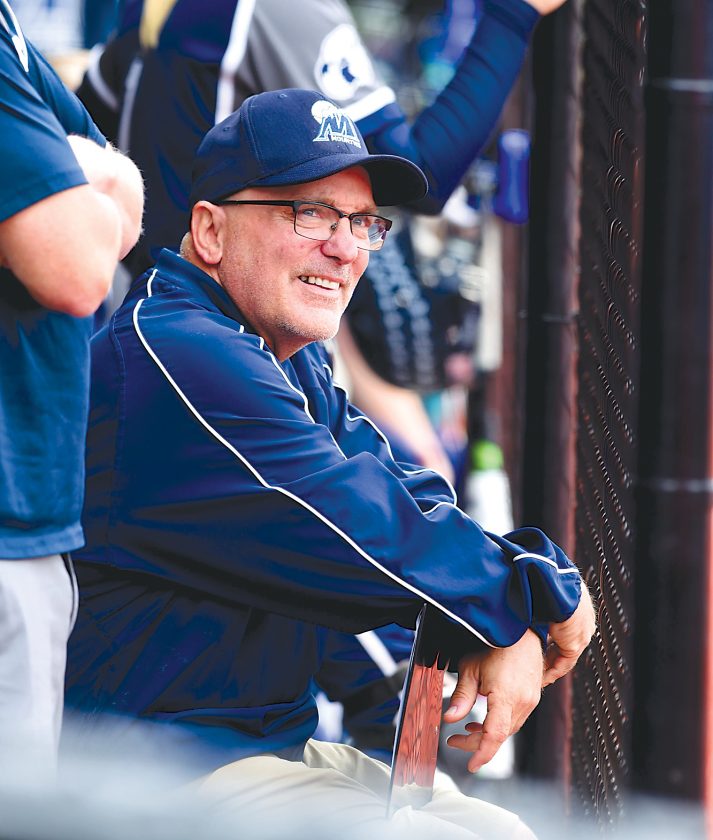 Jim Gonder turned the Philipsburg-Osceola softball program into a state power over his 37 years as head coach.

Now the program will be looking to someone else to lead it.

Gonder, who went 682-151 and won three state titles over his career at his alma mater, announced on Twitter on Tuesday he was stepping down.

It’s probably not a total retirement because he left the door open to being an assistant coach at some point.

He was an assistant coach for three years before becoming the head coach as a 25-year-old.

“I’m not saying I would be averse to being an assistant coach or a volunteer coach somewhere, but the commitment of time as a head coach is just not where I’m at in my life right now,” Gonder said. “I don’t want to put the time in required to be a good head coach. So, it’s time for me to step down, and they can get someone who has the energy and the love of the sport, hopefully.

“I’ve put a lot of my heart and soul into it. My family has been supportive. My wife, Sandy, has been so happy with what we’ve done, and she’s always been my biggest supporter. I was in a great situation.”

Gonder, who recently turned 63, announced his resignation a day after Monday’s team banquet. He sent his resignation in last week. He texted his players on Tuesday regarding his decision, and, as the manager for the Mountie Softball twitter page, tweeted his decision on the same day.

“This is my last post as head of Mountie Softball,” he tweeted. “It has been my passion for the last 37 years. Go Mounties.”

He said he had thinking about stepping down since last year.

“I know when it’s time,” he said. “I love coaching, obviously. I love the kids. I love the community and the parents. But at this stage in my life, I don’t want to commit to a 12-month position. If you want to be a successful head coach of any sport, you’ve got to put the time in. There are other things I want to do. I have a new grandchild, and my wife is retired. We like to travel, so there are things I want to do that this will allow me to do.”

“I talked to Coach Gonder a little while ago, and he said he was thinking about it, so I knew it was coming,” P-O athletic director Bob Mann said. “Obviously he’s going to be irreplaceable to not only our softball program but all the kids he’s coached over the years in both softball and volleyball. He’s left our program in good shape for the next person no matter who it is, but it’s just a tough act to follow.”

Gonder, whose teams earned 20 or more wins 16 times, is 18 wins away from 700 for his career. He would have a good shot at reaching the milestone next season, but that wasn’t a part of his decision.

“Obviously when you coach long enough, you’re going to get some of those milestones,” he said. “I didn’t coach for 600-and-something wins. I coached because I enjoyed it, and I loved the kids. It was something I had a lot of passion for.”

“Three state titles is something I’m very proud of,” he said. “It was just not myself. Obviously a lot of people — assistant coaches, players, parents and the community — had a role in that. I’m really glad it happened.”

P-O’s most recent state title nearly didn’t happen. The Lady Mounties had to rally in their first District 6 Class 3A playoff game to beat Tyrone. And they started rolling in the state playoffs, eventually beating Holy Redeemer, 8-3, for the state championship.

“The kids just kept getting better and better, and we had a little bit of the mojo rolling there at the end,” Gonder said. “You put yourself in position to get to those games, and I think every year, we were able to get ourselves into those positions.”

He coached many star athletes, including his daughters, Mackenzie and Kelsey, and he was on the job long enough to coach mothers and their daughters as the program became a power. The Junior Olympic program grew and prepared girls to carry on a winning tradition.

“I think we were a source of community pride, which is something I’m probably most proud of,” Gonder said. “You go to our games, and the way our fans travel, says a lot about how much support our community has given to our program. I’d like to think we’re respected around the state and the league, and that’s a source of pride for me to.”

“I was kind of surprised (about the decision),” said 2015 graduate Abby Showers, now a fifth-year senior on the Penn State Altoona softball team. “But he’s been there for so long that I kind of have to remember that there’s more to life than softball. He kind of left his mark in the expectations of what Mounties softball should be. He is the program.”

The Lady Mounties went 17-5 this season and shared the Mountain League title with rival Bald Eagle Area. Their season ended at the hands of eventual state runner-up BEA, 8-4, in the district semifinals.

“The games we lost were to some quality teams,” Gonder said. “In the district semifinals, we had Bald Eagle 3-2 in the bottom of the sixth inning, and, unfortunately, they scored some runs and ended up winning. The kids worked hard. The kids were great teammates. They did everything I asked of them. By my estimation, it was a great season.”

Where does he see the program going from here?

“We’ve got a brand-new, state-of-the-art facility,” Gonder said. “The district put lots of money into it last year and this year. We have seven or eight starters back next year. We have a quality pitcher back (Kylie Adams), complete infield, catcher and an outfielder. Hopefully I left the program in good shape. Whoever steps in, should be able to hit the ground running. I’d be happy to help out as far as I can with the transition.”

Gonder didn’t want to say who he’d like to get the position. Mann said the position probably won’t be posted until the July school board meeting.

“I’m sure we’re going to get some very good candidates who apply,” Mann said, “because our program is still in very good shape. It’s got to be attractive to head coaches out there.”

Gonder, who retired from teaching four years ago and moved to State College three years ago, said he doesn’t plan on being an assistant at P-O.

“Whoever they hire to replace me, it would not be fair to them,” Gonder said. “I don’t want them to think I’m looking over their shoulder or second-guessing them. I want it to be their baby.”