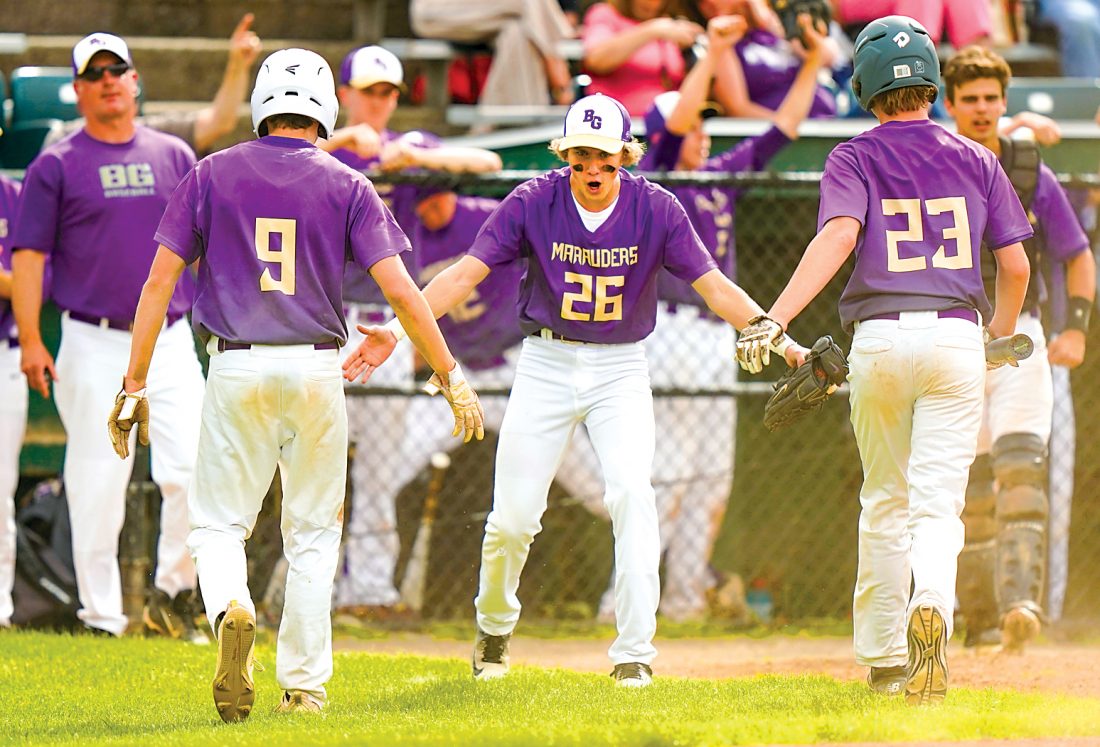 BG got a solid pitching performance from Danny Carrieri and five RBIs from Gaige Reighard while knocking off B-A, 9-2, in the D6 2A semifinals at Veterans Memorial Field.

The third-seeded Marauders will take on No. 1 seed West Shamokin for the D6 2A championship next Tuesday at Peoples Natural Gas Field. The time has not been determined. West Shamokin beat Homer-Center, 12-9, in the other semifinal.

“This team was one game away from it last year,” first-year BG coach Tom Williams said. “Bellwood beat us last year, but there’s something different with this team.

“Today was a great day,” said Carrieri, who scattered three singles through six-plus innings. “We came out with a little more energy than we’ve had and we had a good offensive outing.

“We hit the ball well and played good defense and that allowed us to come out with a big win today,” the senior right-hander offered.

The Marauders pushed over four runs in the second inning, parlaying four hits and three infield errors by the Blue Devils. Sophomore Michael Boston had an RBI single and Reighard belted a two-run double for the key hits.

“You can’t make mistakes in a game like today … and we just made ’em,” Bellwood coach Steve Conlon said. “A couple bad throws, a couple bad plays … if we get a hit, who knows?

“We had first and second in the first inning, 3-4 hitters up, maybe push a couple across, it might be a different game,” Conlon continued. “They beat us. They made plays, we didn’t.”

The Blue Devils scored their only two runs in the top of the third. John Kost scored on Carrieri’s wild pitch and Alex Schmoke scored from second on the same play when BG was called for defensive obstruction at third base.

BG bounced back in the bottom of the third with five runs that put B-A in a 9-2 hole. Boston’s single knocked in two and Reighard capped the flurry with his second double — a three-run blast to left-center.

“Wouldn’t have been possible without my teammates,” Reighard said of his five-RBI day. “Without the people in front of me getting on, it wouldn’t have happened.

“Basically the mindset is put the ball in play,” Reighard said. “I trust my teammates. If I get on, they’re going to score me as well.”

Conlon, who finished his 17th season as B-A coach, already is looking forward to next spring.

“We started three seniors and (Caden) Nagle only pitches, so we had just two seniors on the field,” Conlon noted. “We have a lot coming back. We’ve got some good arms (pitchers) coming back … a lot to look forward to and we’ll build on it.

“We were one game from where we wanted to be, but we learned some lessons and will come back next year,” Conlon added.

Game notes: Sam Homan went 3-for-3 for BG and Austin Lewis contributed two hits. … Bellwood blanked BG, 5-0, in last year’s semis but lost to Southern Huntingdon, 5-2, in the 2018 title game. … Carrieri threw 94 pitches and was lifted after yielding a leadoff single to Dallas Hollen in the seventh. … Ben Dombrosky relieved Carrieri and retired three straight batters to end the game.