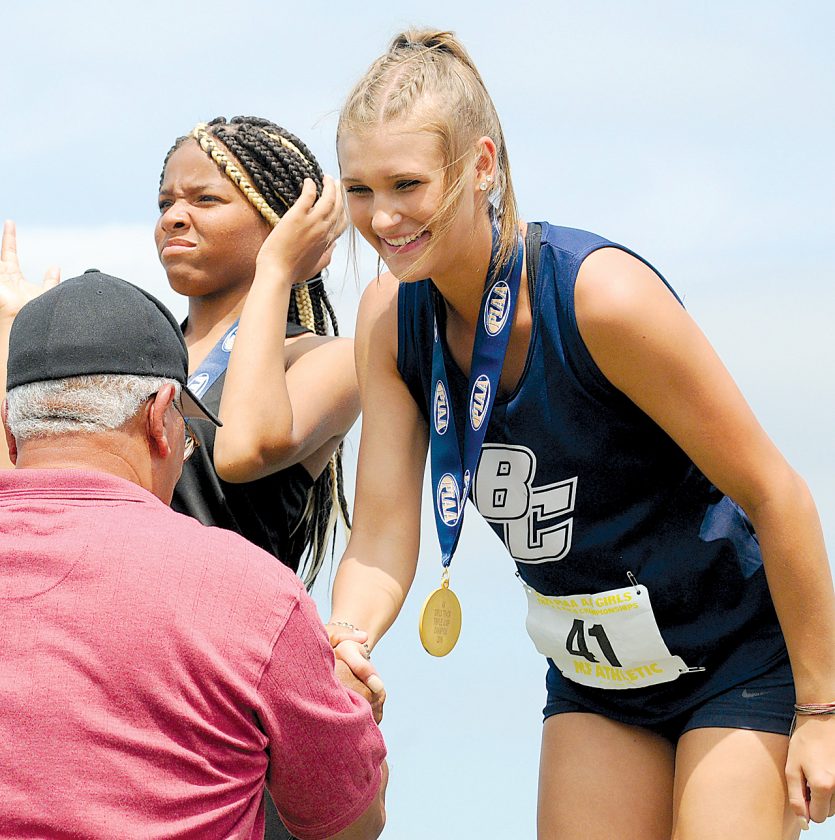 Photo for the Mirror by Teri Enciso Bishop Carroll’s Maddie Murphy is presented her gold medal in Shippensburg on Saturday.

SHIPPENSBURG — Maddie Murphy didn’t have a push to edge someone at the finish line. She didn’t make a remarkable throw to clinch a title, and she didn’t have a final jump that won a competition.

But that didn’t mean Murphy’s gold-medal performance in the Class 2A girls triple jump at the PIAA Track and Field Championships Saturday afternoon at Seth Grove Stadium wasn’t dramatic.

The Bishop Carroll Catholic senior made her first-place jump of 37 feet, 10.75 inches in a preliminary round and had to sweat out the finals while each of her competitors gave their best shot with her watching.

“I was so nervous,” Murphy said. “I was looking at my friends in the stands and told them to tell me if someone jumped over what I had. I backed off a little and didn’t want to hear it. I didn’t want to get in my own head.”

When the final competitor in front of her failed to match her jump, she finally exhaled.

“I have been working for this since freshman year, and to finally achieve it is amazing,” said Murphy, who pumped her fist after landing her state-title winning jump. “I can tell when I have a good jump, and it felt good, and once they announced the distance, I felt good about it.”

Murphy came in as the top seed, but a talk with her mother helped ease the pressures that come with that distinction.

“My mom and I were talking about it,” Murphy said. “We know rankings don’t really matter, because someone could come out and have their best day or worst day. That helped me concentrate on just coming out and jumping well.”

While Murphy was celebrating her first gold medal after medaling in the triple event in each of her first three years (seventh, fifth and eighth), another senior with medal experience was adding to her total.

“The best memory, still to this day, is winning states in the four by eight,” Wess said. “I talked about it at least four times this weekend. Nothing will ever compare to that feeling that I felt that day when we won and the excitement, but every medal is still exciting to receive and shows that hard work pays off.”

Central Cambria senior McKenna Hayward, who along with Wess, Abby Walwro and Olivia Ratchford made up the 1,600-meter relay team, picked up her seventh state relay medal.

“I couldn’t ask for anything better than running with Paige,” Hayward said. “Not only is she a great teammate to have, but she’s my best friend. I wouldn’t want to be going through this with anyone else.”

The 3,200-meter relay team consisted of Wess, Faith Wilson, Ella Vrabel and Walwro. For Walwro, it was her first experience at the state track meet.

“I loved this,” Walwro said. “I really like the atmosphere and everything we got to do this weekend. It’s an honor to go out there (in a Central Cambria uniform), because so many people before us have done so good. You just want to add to that.”

Everett’s Kaitlyn Maxwell has been building a legacy of her own. Maxwell pulled off the impressive feat of medaling in both the 400-meter dash and the 800-meter run despite there being less than an hour between the events.

“I’m happy, because I got one place better than I did last year in both events,” Maxwell said. “It was a personal best in both races.”

Maxwell passed two competitors down the final stretch in the 400 and another one in the 800.

“My coach (Sue Conner) went home last night and watched my recorded races from last year,” Maxwell said. “On it, she saw the people who passed me on the final stretch had a faster cadence. So, she told me to really concentrate on the finish of the races and run them like I was in the 100.”

Portage’s Lauren Shaffer won a sixth-place medal behind Maxwell in the 400-meter dash. Shaffer came into the race relaxed after assuring herself of a medal by making it through Friday’s preliminary round.

“It took the pressure off, because I knew I was going to be in the top eight,” Shaffer said. “I wanted to try and get up there, and I was able to beat two people out.”

n Hollidaysburg’s Darcie Frazier finished 16th in the Class 3A long jump with a distance of 17 feet, 6 inches.

n Regan Sheredy of Northern Cambria finished 17th in the Class 2A shot put with a throw of 33 feet, 9.5 inches.

n Paige Jodon of Hollidaysburg finished in a 10-way tie for 14th by clearing 5 feet, 2 inches in the Class 3A high jump.

n In the first event of the day, Gionna Quarzo of Brownsville broke a PIAA championships record in the 3,200-meter run that had been held by Central Cambria’s Carly Seymour since 2008. Current Central Cambria runner Stella Kuntz finished 11th in 11:38.23 in the race.

n Bishop Carroll’s Kate Yahner did not clear a qualifying height in the Class 2A pole vault.