Golden?Eagles 10-0 after win over Dragons 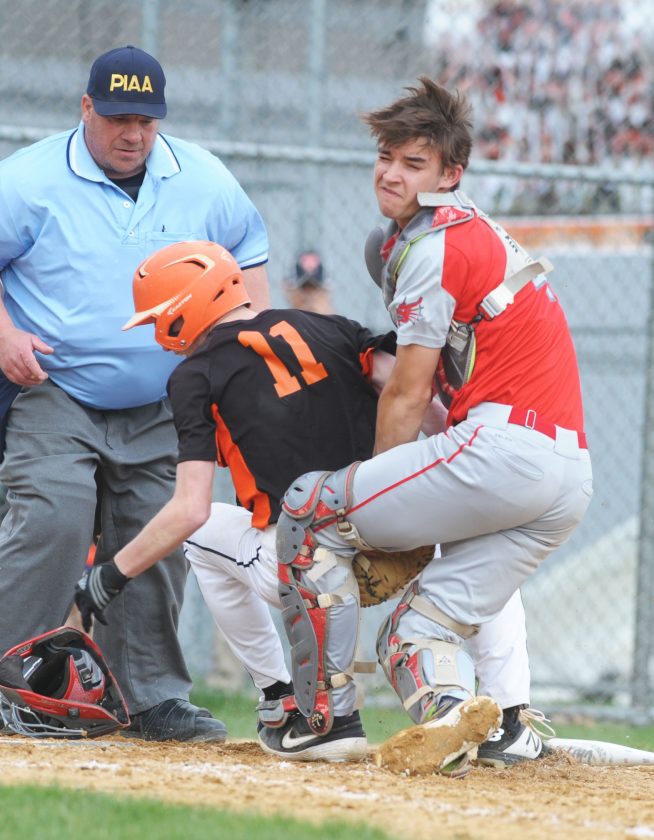 Central catcher Hunter Klotz puts a tag on Tyrone’s Blaine Hoover at home on a play in which Klotz was injured and left the game after the play at the plate. / Mirror photo by Gary M. Baranec

TYRONE — When it comes to competitive high school baseball, the Mountain League ranks among the region’s best every year.

“This league is tough, top to bottom,” Central coach A.J. Hoenstine said Tuesday after his Scarlet Dragons fell to Tyrone, 4-0, at the Harry Sickler Sports Complex.

“This league gets teams ready for the playoffs,” Hoenstine continued, “and someone usually goes pretty far (in the districts and states).”

It might be Tyrone this spring. Coach Kevin Soellner’s Golden Eagles are unbeaten in 10 games after Tuesday’s blanking of Central.

“We knew it would be tight,” Soellner said. “(Focht) is good. He changes speeds well which makes him tough. We wanted to hold them down and Kevin (Lehner) did a very good job — it was his best outing.

“Kevin has had some good ones,” Soellner offered. “He beat Bellefonte, which is good, but this was his best so far.”

It was scoreless until the bottom of the fifth when Tyrone exploded for five hits and the game’s four runs. Colson Lewis started the barrage with a double. After a Rodney Shultz sacrifice, Andrew Pearson’s double produced the first run.

“He makes things happen all the time,” Soellner said of Pearson, the Eagles’ leadoff batter.

After Pearson’s two-bagger, Bryce Hunter singled, Lehner hit a sacrifice fly, and Cory Lehman and Brandon Lucas both singled to make it 4-0.

“It was the third time through the lineup,” Soellner said of the Eagles’ big inning. “We like to get them the second time around, but Focht is tough.”

“We didn’t want to give up any big innings,” Hoenstine said, “but, when the time came, they put up a 4-spot and that was the ballgame.”

Hoenstine noted that the Scarlet Dragons got leadoff batters on base in the fifth, sixth and seventh innings but failed to score.

“Lehner was outstanding today and credit him for finding a way out,” Hoenstine said, “but we’ve got to find a way to do the job. We’re not playing fundamentally sound the past couple games, but we’ll get it fixed.”

When Central got back-to-back hits to start the seventh, Soellner made a quick visit to Lehner on the mound.

His message was simple.

“He told me to concentrate, throw strikes and make the defense work,” Lehner said. “I just did my job and used my fastball and breaking ball, too.”

Ethan Stevenson tripled and drove in three runs to help Professionals Auto Body take the first game of the ...