Tigers’ Fisher gets spot in semis 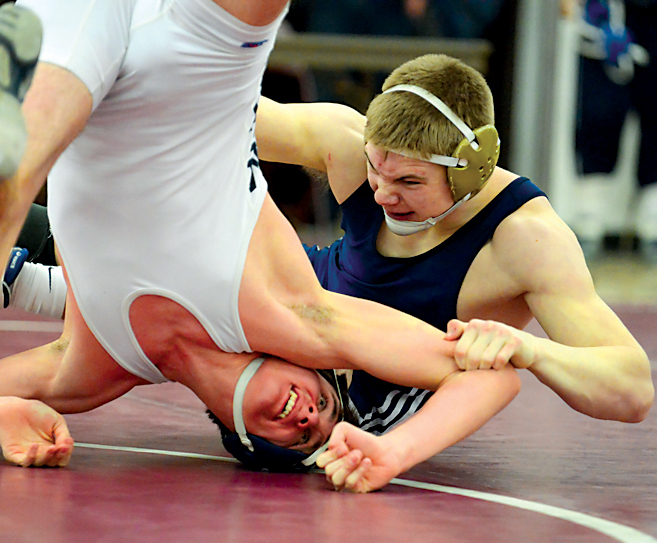 Mirror photo by Patrick Waksmunski Hollidaysburg’s Nate Fisher works toward a pin of McDowell’s Noah Bielak in the quarterfinals.

Hollidaysburg’s Nate Fisher wasn’t satisfied with the way he wrestled in his Northwest Class 3A Regional preliminary bout against Clearfield’s Brett Zattoni, a 2-1 victory.

But the Golden Tiger senior had plenty of offense in his quarterfinal on Friday night at the AAHS Fieldhouse.

Fisher, a District 6 runner-up, followed up his hard-fought preliminary win by building a 5-1 lead and pinning McDowell’s Noah Bielak in 3:17.

“Fisher went out there and wrestled tough,” Hollidaysburg coach Christian Harr said. “He had a pretty equal match his first match. The kid didn’t do a whole lot, so he was kind of patient and rode it out.”

Fisher will face Bradford’s 33-0 Dillon Keane in the semifinals. Keane pinned Mifflin County’s Brycen Hassinger in 1:38 in the quarters.

“It’s going to be a tough task, but I’ve just got to go out with the same mindset,” Fisher said, “and just go to work.”

“If you’re looking at that bracket, that’s the top-seeded kid,” Harr said. “He’s tough. Nate has to stick to his gameplan and wrestle his match.

The Golden Tigers advanced five of their six guys to the semis in Sleeth Fisher, McCready, Dellinger and Haines. Hileman, Sarbo and Simmers reached for the semis for Altoona.

Sleeth, who finished sixth at the District 6 Tournament, was a Wednesday replacement who won his first bout, 4-2, in overtime against Cathedral Prep’s Caden Farr, but lost to Bellefonte’s Cole Stewart, 8-0, in the quarters.

“He got his first win against a pretty good from Prep,” Harr said. “He wrestled a pretty tough Cole Stewart. Kudos to that guy.”

Sarbo, who got a bye in the preliminary round, breezed to the semifinals with a pin of Cranberry’s Carter Stanley in 3:24.

Sarbo, a returning regional champion, built a 13-2 lead before putting Stanley on his back for a third time in the second period. The third time was the charm. Sarbo (33-3) faces Cathedral Prep’s District 10 champion Ben Tirpak (28-10) in the semifinals. Tirpak recorded a 13-5 major decision and a pin in 2:35 in his first two bouts.

Fisher, a District 6 runner-up, earned a hard-fought 2-1 win over Clearfield’s Brett Zattoni in the preliminary round before building a 5-1 lead and pinning McDowell’s Noah Bielak in 3:17.

Fisher will face Bradford’s 33-0 Dillon Keane in the semifinals. Keane pinned Mifflin County’s Brycen Hassinger in 1:38 in the quarters.

McCready, a District 6 champ who got a bye in the prelims, advanced to the semifinals easily. The returning state placewinner racked up a 16-1 technical fall over Selinsgrove’s Ryan Aument in 4:18.

Simmers had a bye in the first round, and then he pinned Shikellamy’s Connell Fain in 2:21 in the quarters.

Hileman recorded a pin in 1:39 in his preliminary bout, but the District 6 runner-up lost, 5-4, to Clearfield’s District 4/9 champ John Thomas. Hileman got a stalling point with less than a minute left to tie the score, 3-3, but Thomas took him down about 10 seconds later for the deciding point.

Dellinger, who had a bye in the first round, dropped a 3-2 decision to Meadville’s Thomas Pollard in the quarterfinals. Pollard took Dellinger down in the second period, escaped in the third to break a 2-2 tie. Dellinger couldn’t generate any offense to get the winning takedown.

“That was about an equal match with Pollard,” Harr said. “I think that he is better than (Pollard), but he went out there and made some mistakes. At this level, that’s kind of where you can’t make mistakes in the postseason. He’ll learn from this and come back tomorrow ready to go.”

Haines earned a 3-2 decision over DuBois’ Alex O’Harah in the first round, but he was pinned by Cathedral Prep’s returning state runner-up Kawaun DeBoe in 1:47 in the quarters.

“Sam avenged a loss, lost to the kid twice during the regular season,” Harr said. “That was a huge win for him. Then he goes up against the top-ranked guy in the state.”

Notes: Cathedral Prep leads the team race by 16 points, 56-40, over Mifflin County. … Wrestling resumes at 10 this morning. The semifinals are at 12:30, and the finals and consolation finals are set for 6 p.m. … Twenty-eight teams are represented at the regional.