Rudel: Tournament dreams not so sweet for Macklin 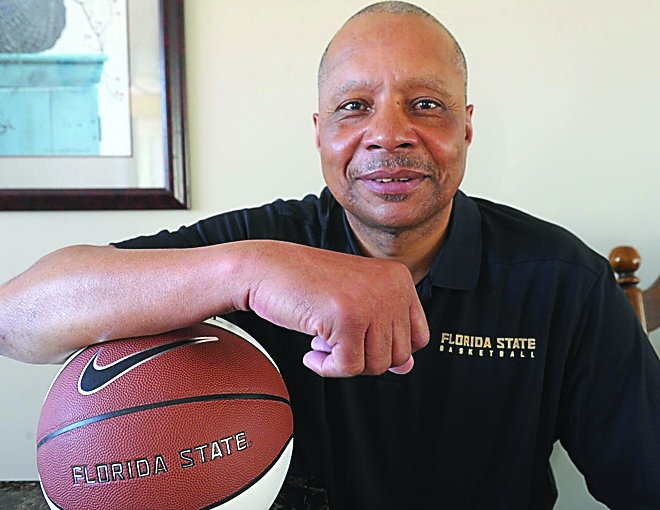 Mirror photo by Gary M. Baranec A part of Kenny Macklin has always wondered “what if” about Florida State’s potential in 1970.

In 1970, NCAA danced without Florida State

When the former Penn State Altoona head basketball coach and current Mountain Lion assistant was a player at Florida State in 1969-70, the Seminoles thought they had Final Four potential.

In fact, they proved that, going 22-3 with their lone losses coming to North Carolina (with Charlie Scott), USC (with Paul Westphal) and Jacksonville (with Artis Gilmore).

Jacksonville lost in the national championship to Bill Walton-led UCLA and finished the season 27-2. Jacksonville’s only other loss came to Florida State.

But the best team in the Seminoles’ history wasn’t on the 1970 NCAA dance card because it was on probation after being told at midseason, when it was 11-2, that there would be no postseason.

“It was an emotional reaction — people had tears in their eyes,” Macklin said. “They got us for recruiting violations. (Players were) invited to campus and played pick-up games, and coach was not supposed to witness, but obviously he did.”

It was a minor enough violation that Hugh Durham, a former FSU player, would continue as head coach through 1978 before moving onto at Georgia for 17 seasons and eight more at Jacksonville en route to winning 634 games. He was inducted into the Basketball Hall of Fame in 2016.

But his 1970 team, with Macklin as the starting point guard, paid a price that stings to this day.

“There’s a part of me that says, ‘what if?’ when March Madness comes along, but I let it go,” he said.

Florida State was led by Dave Cowens, who went on to NBA stardom with the Boston Celtics. Kareem Abdul-Jabbar (then Lew Alcindor) had just graduated from UCLA – obviously, this was well before the one-and-done rule – but the ‘Noles felt they could beat the Bruins.

“UCLA was the sweet spot and the prime team,” Macklin said. “Steve Patterson had replaced Kareem, but we figured Dave Cowens would eat him alive. They had (Sidney) Wicks and (Curtis) Rowe, but we felt our forwards were more physical. They had Henry Bibby, and we thought he was too little to play with us. We were playing with a chip on our shoulder.”

The team gathers in Tallahassee periodically, most recently this past January for a 50-year reunion, and was introduced during an FSU game. Of course, the subject of how well they would have done in the NCAA Tournament is bounced around, and the uncertainty is gnawing.

“I would have rather played and lost (than been on probation),” Macklin said.

All five starters averaged in double figures, including Macklin’s 10.9, en route to averaging 91.7 points per game, 10th in the country.

But as notable as the FSU record, and probation, was the fact that the team broke a color barrier of sorts as Cowens was the only white starter.

“There was an unwritten rule (then),” Macklin said, “that you couldn’t have more than two black players on the court at once.”

That led to taunting and scenes from the movie “Glory Road” and, more recently, “The Green Book.”

Angered by their NCAA plight that “ramped up our intensity” that included the mindset of “no layups,” the song and other slights pushed the players to take a stand. Or a seat.

“At one point (at Georgia Tech), they played that song before and after the national anthem,” Macklin said. “We didn’t stand up. (Colin) Kaepernick didn’t invent that.”

That was on top of having to be selective where the team ate and stayed.

“I will say Durham and his staff did a good job making sure when we went on the road, the hotels we stayed in were appropriate for us as team,” he said. “But it emphasized what happened if you stepped out of line. I lived that — the sundown laws.”

Macklin, now 70, said when he sees today’s young players overreacting, he thinks they could use a history lesson.

“Some of the current players can’t deal with people talking trash,” he said. “(I’m thinking), ‘Are you kidding?'”

“Coach Mac has been great for me and our staff,” he said. “He’s someone who has been a head coach, someone who will ask me questions that I might not want to hear. He’s also become a very good friend. It’s been a great relationship. He’s a genuinely great human being.”

A New Jersey native who played and later coached at East Orange, N.J. – which had a DePaul pipeline at one point, sending Clyde Bradshaw and Gary Garland (Whitney Houston’s brother) to the Blue Demons – Macklin grew up with the game transcending race.

Though in a distinct minority at FSU – he often socialized at nearby Florida A&M, a black school – Macklin invited Cowens to his home in New Jersey for a couple weeks one summer. The two bonded and remain friends to this day.

“I just never felt like it was black-white tension amongst us,” Cowens, reached at his home in Maine, said. “In that time, society was different, but we all grew to respect each other’s ability to play. It just seemed like we were together. Everybody was from all different places, but I don’t remember all different issues.”

Cowens called Macklin “the glue” to the squad, which was nicknamed “Busted Flush” because it’s winning hand was broken by the NCAA.

“Just his personality and his perspective helped us bond together,” Cowens said. “He was like a bridge for everyone.”

Despite the disappointment – “we didn’t get a chance to march through the madness,” Cowens said – the team stayed together, then and now.

“I’m proud of the way we all reacted,” Cowens, named one of the NBA’s top 50 players of all time during the league’s 50th anniversary in 1996, said. “We had a legitimate chance to win a championship, but we weren’t allowed through no fault of our own. But nobody went to the press and moaned. Nobody transferred. We went out and won 10 straight after that.”

Macklin endured and enjoyed a circuitous 50-year basketball journey, from East Orange to the long bus trips of junior college ball in Kentucky to a scholarship at Florida State and to Europe briefly before landing in Altoona 30 years ago.

As this year’s tourney unfolds and CBS eventually plays “One Shining Moment,” despite being left out of the 1970 bracket, Kenny Macklin feels he had his share of shining moments at Florida State.

“In spite of the racial upheaval that the country was going through at that time, I had the best experience,” he said. “They treat me well. It’s a warm and fuzzy feeling when I go back. For people to remember your name, it’s kind of nice.”