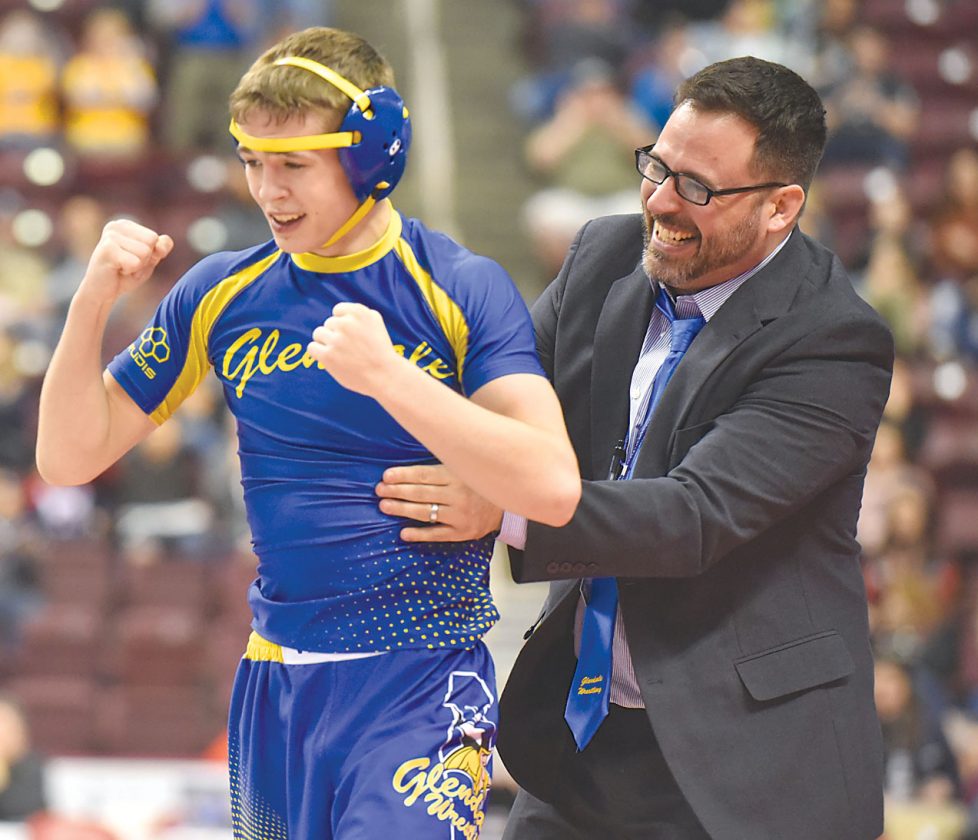 HERSHEY — Glendale has had a number of pretty good wrestlers over the years, including Tom Ross and Brock McMillen, both of whom finished second at the PIAA Class 2A Championships in 1986 and 2018, respectively.

The Vikings had never produced a state champion.

But McMillen changed that on Saturday afternoon at the Giant Center.

“It means a lot,” McMillen said of making history. “I live in a small town, small area, so it feels good to be the first state champ there.” 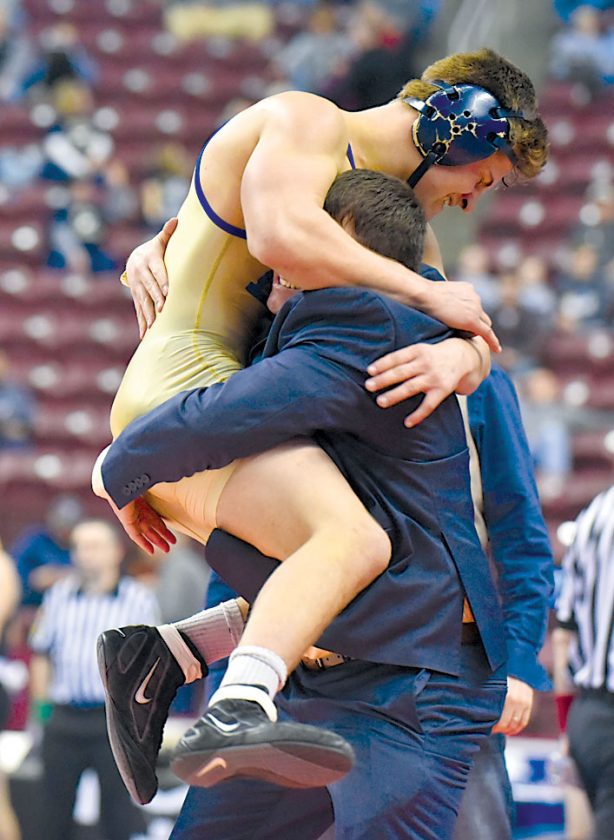 “It’s awesome,” said Glendale coach Billy Dubler, who placed sixth as a senior in 1997 wrestling for the Vikings. “He’s first one in our school history, couldn’t happen to a better kid. I’m so proud of him.”

Chestnut Ridge’s Jared McGill made some personal history of his own by winning his first state title, capping off a dominant state tournament by beating McGuffey’s Christian Clutter, 8-2, in the 170-pound finals bout.

McMillen and McGill were two of nine area wrestlers who earned medals.

McMillen, who lost to Mount Union’s Josh Boozel, 7-3, in last year’s finals, was down 1-0 to in the second period when he took Shields down with a slick shot. Shields escaped to tie the score, 2-2.

“I wrestled pretty well,” McMillen said. “I knew what he had coming, so I tried to defend it as much as I could. I didn’t get to as many attacks as I would have liked, but I got to enough and finished.”

McMillen escaped 18 seconds into the third period, and the wrestlers remained on their feet until Shields (30-4) took a shot. McMillen, who said on Friday he was comfortable in defensive scrambles, fought off the attempt.

When the final second ticked off the clock, McMillen, not the most emotional wrestler, pumped both of his fists and hugged Dubler.

“It was emotional for me,” McMillen said. “It felt real good after last year. Being there again and winning was great.”

McMillen, who finished with a 43-1 record, walked a tightrope through the tournament, posting three straight 3-2 decisions to end it.

“I never like the score to be real close,” McMillen said. “I like to score a lot of points, but sometimes you have to score and see what’s there.”

“Brock knows how to win,” Dubler said. “Brock has always been a winner since he was 8 years old. He was winning PJW title and now a state title in high school. I’m sure next year he’ll set his goal of scoring bonus points in these matches.

“He’s a student of the game. We were back at the hotel watch (Shields) in three matches on Flo. He’s a coach’s dream. You want all 14 of your wrestlers doing that. Hopefully they can take some notes and see what this guy is doing.”

With two years left in his high school career, McMillen could go on to make more history for the Vikings.

“I don’t know how many days I’ll take off, but I’ll get back into wrestling real soon,” McMillen said.

While the score doesn’t indicate it, McGill, who finished with a 40-0 record, was as dominant in the finals as he was in his three previous tournament bouts, all of which ended in technical falls. McGill outscored his four opponents by a combined 59-7 score.

“I felt I wrestled well,” McGill said. “I got into the hand fight right away, rode well on top, got out on the bottom, so I felt great out there.”

He scored a takedown in the first period and rode hard the last 1:15 of the period. McGill reversed in the second and got a stalling point with 14 seconds left in the period to make the score 5-0.

“Getting that first takedown was huge, a little relief,” Ridge coach Greg Lazor said. “Then he went to work on top.”

Lazor was laughing in McGill’s corner after the stall call.

“That was about the only thing I could think to do at that moment,” Lazor said. “The guy actually said ‘You’re going side to side. That’s all your doing.’ That’s what you usually do so you don’t get called for stalling. I’m not sure what he wanted, but I’m glad the match was in hand and didn’t mean as much.”

Another stall call on Clutter gave McGill two points. McGill cut Clutter in the final seconds because he was still thinking bonus points.

“I wanted to go through this whole postseason bonus pointing everyone,” McGill said.

Lazor was still fighting back happy tears when McGill came down off of the medals stand.

“Jared is my neighbor,” Lazor said. “We’ve been together for a long time, since he was about 5 years old. It’s special. He’s been playing in the yard with my kids and everything else.”

McGill was one of the favorites to win last year’s state tournament, but a mistake in the semifinals against Port Allegheny’s Jacob Kallenborn cost him an 8-7 loss.

“It was a death in the family to bring up the loss to Kallenborn,” McGill said. “Now we can forget about it and move on. That loss last year was the most devastating thing that’s ever happened to me. Coming down here and redeeming myself feels great.”

McGill, who finished sixth as a freshman, fourth as a sophomore and third last season, is only the second Ridge wrestler to get four medals. McCoy also earned four medals.

“It feels amazing to be a part of Justin McCoy and Chestnut Ridge High School,” McGill said. “It’s finally a great moment to put that gold medal around my neck.”

McGill, who finished his career with 161 wins, will go on to wrestle at Pitt, but he expected a laid-back celebration before that.

“I want to sit back with my family and finally relax,” McGill said.