Holderbaum picks up two wins by fall in 2A opening round 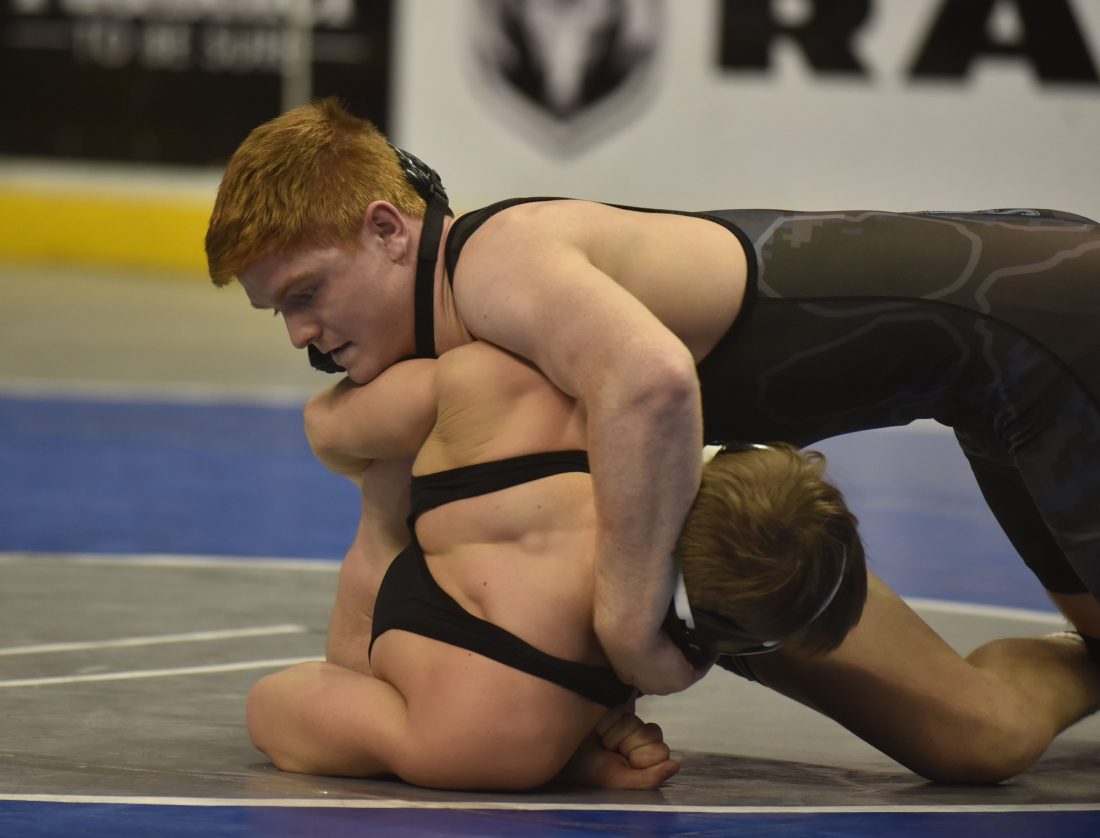 Penn Cambria senior Derek Brown goes for a pin on Sheffield High School’s Ethan Finch, which Brown got in 1:26, during their opening-round matchup at 182 pounds in Hershey at the Giant Center on Thursday afternoon. Photo for the Mirror by Tami Knopsnyder

Down 2-0 entering the second period of his preliminary bout at the PIAA Class 2A Championships on Thursday at the Giant Center, Holderbaum hooked up a near cradle on the 36-3 Jacob using what he called a “death grip” and got the fall 10 seconds into the second period.

“Coach always tells me to hit things fast and you’ll be good,” Holderbaum said, “and that’s what I did. I knew I had to death grip that because that was my chance. That was my best death grip.”

“He has great speed,” Ridge coach Greg Lazor said. “Sometimes he thinks a little bit instead of pouncing on what’s there. The more we get him hitting things quick, he’ll catch kids offguard and not ready.”

Holderbaum said he didn’t panic when he got taken down in the first period.

“I knew coming into the match I had to wrestle tough,” Holderbaum said, “not give up sloppy stuff. In the first period, I got taken down, and I was okay. I just couldn’t let him tilt me or break me a little bit. I had to keep my confidence up and do what I can do.’

It was Holderbaum’s second pin of the day. He opened the tournament with a pin of Line Mountain’s Mason Leshock in 4:53.

“I thought coming in maybe I’d get a few wins but never two pins,” Holderbaum said. “It feels pretty amazing.”

“I just have to go wrestle and have fun,” Holderbaum said.

Two other Lions, Kai Burkett (106) and top-seeded Jared McGill (170), breezed to wins with a pin and a technical fall, respectively. Ridge is in sixth place in the team standings with 20.5 points. Southern Columbia leads the team race with 36 points.

“We wrestled well,” Lazor said. “The boys went out there and went after it, got on their attacks and pulled out some nice wins.”

Eight wrestlers from the Mirror coverage area advanced to the quarterfinals, including all three 132-pounders in Bedford’s Kaden Cassidy, Philipsburg-Osceola’s Chase Chapman and Everett’s Garret Cornell.

Burkett (34-4) was up 7-0 on Lewisburg’s Kaiden Wagner when he got the fall in 3:37. He’ll face John Paul II sophomore Matt Vulakh (26-9), who pulled off the shocker of the day by beating Reynolds state champion Gary Steen, 5-2, in the first round.

“Burkett looked good,” Lazor said. “He got his takedown, looked tough on top, controlled the match and did what he was supposed to do. He has a big one tomorrow.”

McMillen, the top seed at 126, breezed to a 7-0 win over Biglerville’s Josh Tuckey in the first round. McMillen (40-1) notched three takedowns in the decision. He’ll face Notre Dame GP’s Brandan Chletsos (34-8), an 8-3 winner over Brockway’s Anthony Giasi, in the quarters.

Cornell, a fifth-placer at regionals making his fourth state appearance, opened with a 33-second pin of Redbank Valley’s Ethan Wiant in the pigtails. He followed that with a heart-stirring 7-5 win over Sullivan County’s Nathan Higley.

Cornell was up 6-1, but Higley came back in the third. After getting a late takedown, Higley nearly got back points, getting one of the two needed waves of the referee’s arm, but Cornell fought out of the move and avoided disaster.

“My nerves were definitely pumping in that match,” Cornell said. “I thought I wrestled pretty well in the first half, and then I couldn’t do much on the bottom because he had his legs in really good. When he got one count, I had to get going because it would be overtime, and I didn’t want that.”

“I thought he wrestled a smart match the first two periods,” Everett coach Rob Ripple said. “In the third period, he coasted a little bit. It’s something we definitely have to work on.”

Chapman took a 6-3 lead into the third period, but Leonard reversed to get to within one. Chapman widened the gap with his own reversal. After giving up an escape, Chapman scored a takedown to make it 10-6. Leonard got a late reversal, but Chapman had done enough.

“He wrestled a very smart match,” P-O coach Brad Pataky said. “A lot of positions he found himself in are things that we’ve been working on in the room. He stayed poised, stayed controlled. At this point, it’s just about advancing. He got the mission accomplished.”

Chapman (27-7) will have to play giant killer again as he faces Cambridge Springs’ 40-0 Tye Varndell, a 9-3 winner over Newport’s Dorian Gonzalez.

In the bottom of the bracket, Brown pinned Sheffield’s Ethan Finch in 1:26 to advance to the quarters, where he’ll face Littlestown’s Carl Harris (24-2), a 9-4 winner over Muncy’s Ethan Gush.

“I’m feeling good. The knees don’t bother me today,” Brown said. “I have to get ready for tomorrow’s match and get back up into the semifinals.”

TOURNAMENT NOTES: The second round of consolations are also at 9 a.m. The third round of consys are at 11:45. The semifinals are at 7:30 p.m., along with the fourth round of consys. The consy semis are at 9:30. … Dubler, who lost his first bout to Athens’ Gavin Bradley, 4-2, was losing late in his consy bout to Danville’s Andrew Johnson when he threw Johnson to his back and pinned him in 4:57.