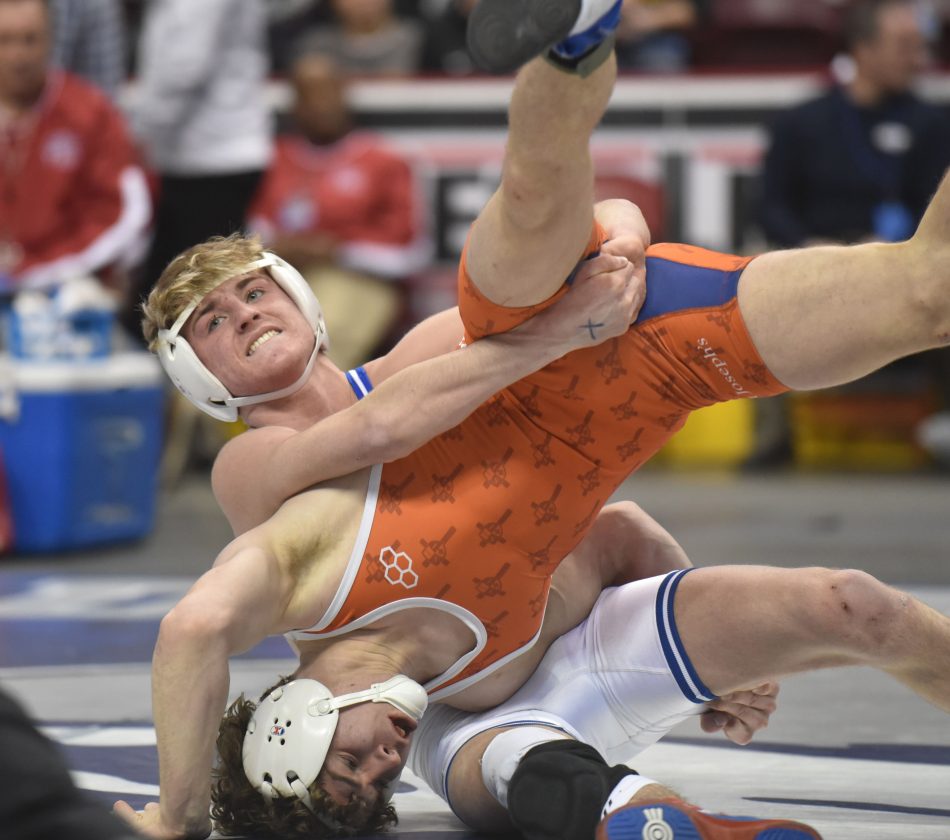 HERSHEY — Coming off of a dominant Southwest Regional Tournament title, Bedford’s Kaden Cassidy was one of the favorites to win the 132-pound title at the PIAA Class 2A Championships.

But when he suffered a 3-2 loss in the semifinals on Friday night to Saucon Valley’s eventual champion Joshua Jones, Cassidy had to re-focus on earning another third-place medal.

Cassidy did that, gutting out a 3-1 overtime win over Everett’s Garret Cornell last Friday night and then battling a knee injury in a 6-5 win over Saint Joseph’s Catholic Academy’s Zack Witmer in the third-place bout.

“It feels good, but it’s not where I want to be,” Cassidy said. “Hopefully next year I can attain that goal of getting first place.”

Eight other area wrestlers placed in the top six, including state champions Brock McMillen of Glendale and Jared McGill of Chestnut Ridge at 126 and 170, respectively.

Cassidy was winning 2-0 in the third period of the semifinals, but he gave up a stalling point and went to his back for two nearfall points with 7 seconds left.

“I thought I wrestled well in the match,” Cassidy said. “I stopped wrestling in that last 15 seconds.”

Cassidy was later obviously emotional after his overtime win over rival Cornell.

“After that loss, he came back and gutted that one out,” Easter said. “Cornell is a super wrestler.”

“That last match, I don’t think I shot once,” Cassidy said. “I might have made a half shot. I was just kind of limping around out there and scrambling to get my points.”

Cassidy (38-2), who finished third for Bishop McCort as a freshman before missing most of last season at Chestnut Ridge due to a thumb injury, will begin working toward winning a state title next season.

“I feel pretty good,” Cassidy said. “That bracket had about five or six seniors. You’ve got to beat the best to be the best, though. I’ve just got to get better this summer and work on a bunch of things.”

Brown (38-5), who was also lost in the semifinals on Friday, 3-2, to McGuffey’s eventual runner-up Christian Clutter, finished his high school career with two straight pins. The last came in 2:02 in the third-place bout against Athens’ David Galasso.

Brown was winning 3-0 when he took Galasso down to his back and pinned him.

Last year, Brown made the semifinals and lost to Susquehanna Township’s Edmond Ruth, 15-9. He ended up finishing sixth.

“I’m extremely proud of Derek,” Penn Cambria coach Todd Niebauer said. “He made sure he didn’t let that semifinal loss get to him like last year. He said he wanted to make sure it was known that he deserved to be there, and I believe he did that. It’s so hard to end a career in a win, and was able to do that.”

Holderbaum (31-13) had the tournament of his career, winning his first three bouts, including two by fall, to make the semis. He fell to Forest Hills’ eventual champ Jackson Arrington, 6-1.

“At the beginning of the year, we were watching him in the room and we kind of looked at each other and said ‘This kid can medal,'” Ridge coach Greg Lazor said. “Then he had kind of a lull in the middle of the season, and then he came back, opened it up and wrestled great.”

He came back with a 7-6 win in the consolation semifinals before losing to Elizabeth Forward’s 43-2 Ryan Michaels, 14-0, in the third-place bout.

Cornell, who went 4-2 in his fourth state tournament, earned his second state medal. A third-placer last season, Cornell came back from a 3-2 loss to Witmer in the quarterfinals with two wins to take on Cassidy again. After losing to Cassidy, Cornell (35-6) pinned Northwestern’s John Wheeler in 3:46 in the fifth-place bout.

Burkett (36-6), who lost to Biglerville’s eventual runner-up Levi Haines, 8-0, in the semifinals and to Reynolds’ 2018 state champ Gary Steen, 6-2, in the consolation semis, ended the tournament with a 6-0 win over Athens’ Gavin Bradley.

Sossong (43-8), who lost his first-round bout, came back through the consolations and posted a 4-3 overall mark. He lost to Towanda’s Cooper Mosier, 1-0, in the fifth-place bout.

Johnston (43-7) also went 4-3 in the tournament, losing his first bout and coming back through the consolations. He finished with a 4-3 loss to Wilson Area’s Kolby Flank in the fifth-place bout.

“I’ve seen some of the state rankings, and they don’t give him his due,” Glendale coach Billy Dubler said, “but I knew he was a top eight kid all season long.”