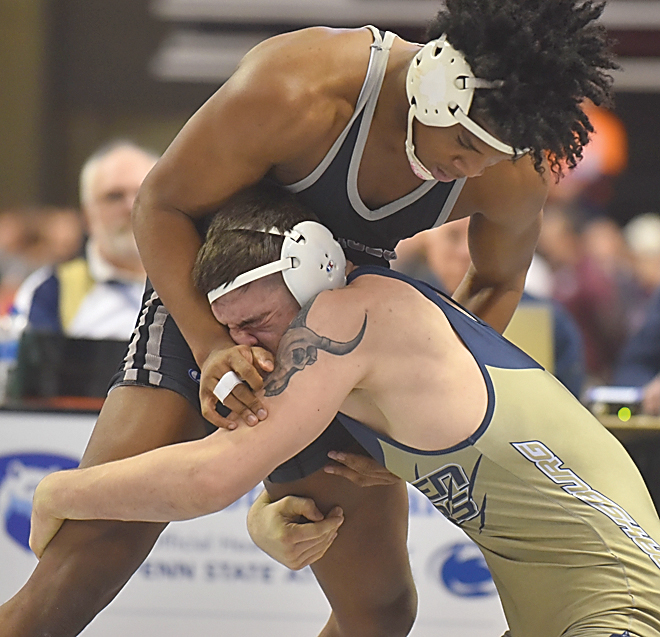 HERSHEY — Nothing is a given at the PIAA Championships. It’s why the tournament is regarded as the toughest tournament in the nation and why college coaches flock to it.

Three top-ranked Class 3A wrestlers lost on Friday at the Giant Center, and many more returning medal winners didn’t medal this time.

Unfortunately for Altoona’s returning seventh-placer Matt Sarbo and Hollidaysburg’s returning eighth-placer Mason McCready, they were among the returning medal winners who didn’t get back on the medals stand. Both were eliminated a round shy of the medal round.

Hollidaysburg’s Gus Dellinger (220) was eliminated earlier in the day, two wins shy of making the medal round.

Sarbo, a sophomore, went 0-2 on the day, losing to Kiski Area star Darren Miller, 10-0, in the quarterfinals and dropping a controversial 3-2 loss to Liberty’s Mike Torres in the third round of consolations.

“It didn’t work out for us this weekend,” Altoona coach Joel Gilbert said. “Maybe it will give him a little motivation in the offseason.”

“We didn’t get what we should have out of it,” Hollidaysburg coach Christian Harr said.

McCready, a senior, went 1-1 in the consolations on Friday, earning a 5-3 overtime win over Harrisburg’s Neamiah Diggs in the second round and losing to Belle Vernon’s Scott Joll in the third round.

Dellinger, a senior, dropped a 5-3 decision to Dallastown’s Jamal Brandon in his only consolation bout of the day.

Sarbo (36-5) ran into a buzz saw in Milller, who had three takedowns, an escape and three late nearfall points.

“Too much horsepower,” Gilbert said. “We got in a few times, and we just couldn’t finish.”

In his next one, Sarbo was given a late takedown by the head referee with about 10 seconds left to give him a 4-3 lead, but the takedown was waved off after the referee conferred with the mat judge.

“I went over and asked the official, and they said the kid still had a whizzer in, and we weren’t in control,” Gilbert said. “It’s a tough call for the official. You fell you had two points and you’re trying to ride your opponent out to win the match. Hopefully it’s a learning experience for the kid.

“Overall, it was a real good season – district champ, regional champ again. I’m sure this isn’t what he wanted. I’m sure he’ll have to re-evaluate what went right, what went wrong and change it for next season.”

In his first bout, McCready was taken down by Diggs with 12 seconds left in the bout to send into OT. McCready, though, got a takedown 32 seconds into the extra period.

“The earlier win was great,” Harr said. “He went out there and got after it, just like last night. He held his own and scored there in overtime.”

Joll took the Bucknell-bound McCready (31-7) down twice, the last on a counter with 5 seconds left to get the win.

“He went down firing,” Harr said. “Not all of them go your way.

“I’m assuming this is going to hurt for a little bit, but there are bigger and better plans for Mason McCready.”

Dellinger (28-9) got a stalling point with 6 seconds left to tie the score, 3-3, but Brandon got a takedown 2 seconds later to win.

“Gus had some tough competition here this weekend,” Harr said. “He had to go out and compete against the better kids in the state. Against Brandon, he got a stalling point and then got scored on. Gus had a phenomenal year.”

INDIANA — Tussey Mountain junior 126-pounder Hunter Horton seems to have saved his best wrestling for the ...

EBENSBURG — One year removed from falling in the District 6 Class 1A finals, the Bishop Carroll boys basketball ...

WILLIAMSBURG — Adam Uplinger helped save what looked to be a sinking ship of Pirates on Friday night. The ...