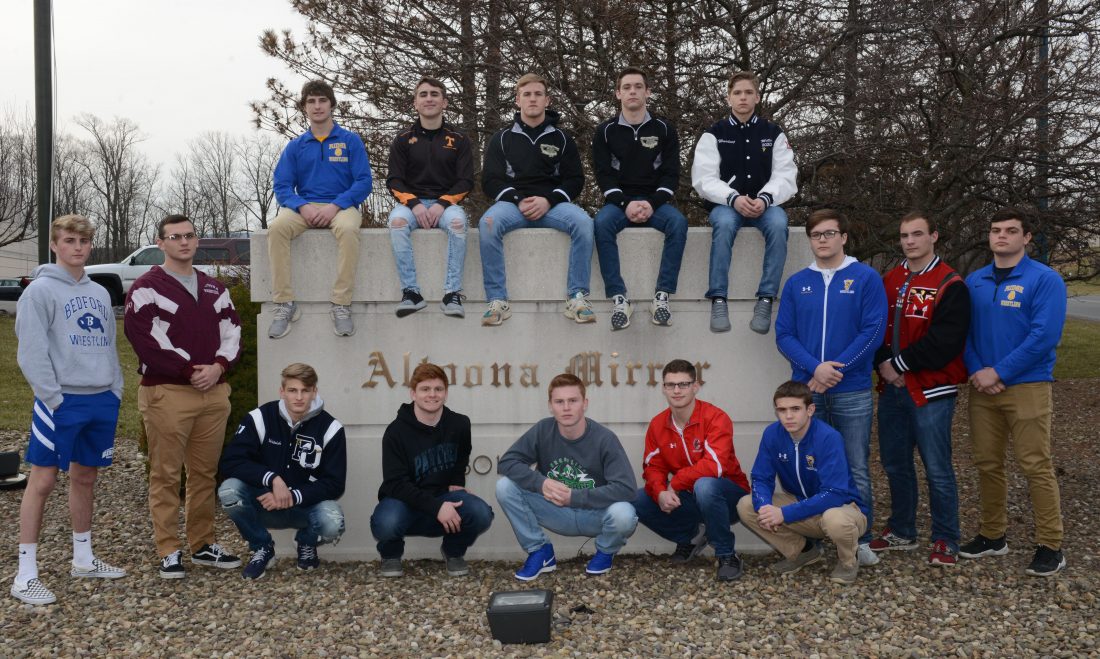 It was a banner 2018-19 for many wrestlers and some teams in the Mirror coverage area, particularly for Glendale sophomore Brock McMillen and Chestnut Ridge senior Jared McGill.

It was a golden year for McMillen and McGill.

Spurred on by hard losses in the previous year’s PIAA Class 2A Championships, they won state titles at 126 and 170 pounds, respectively.

Because of their super years, McGill and McMillen, who combined to go 83-1, have been named Co-Wrestlers of the Year on the 36th annual Mirror All-Star Team.

McGill’s coach, Greg Lazor, has been named the Mirror’s Coach of the Year for the sixth time in the last eight years. Lazor, who shockingly announced his resignation on Monday, guided the Lions to a 16-1 record and a third-place finish at the PIAA Duals.

McMillen, who was a state runner-up at 113 as a freshman, became Glendale’s first state champion when he beat Bishop McDevitt’s Chase Shields, 3-2, in the finals. McMillen (43-1 this season, 84-5 in his career) won his first District 6 and Southwest Regional titles to get to the state tournament.

McGill, who got upset and finished third last season, breezed to his state title with three technical falls and an 8-2 decision over McGuffey’s Christian Clutter in the finals. A four-time District 5 champion and two-time Southwest Regional champ, McGill finished with a record of 40-0.

The Lions have become a dynasty in District 5 under Lazor, winning eight straight district team titles at the individual tournament and seven straight District 5 Duals titles. Lazor, who went 203-48 in 11 seasons, was named District 5 Coach of the Year eight straight years.

More on the Wrestlers of the Year and the Coach of the Year in the following pages of the Mirror.

The first, second and honorable mention teams follow the order of the Mirror rankings, with some exceptions at deep weights like 170 and 220, where there are two first-teams, respectively. There are also two first-teamers at 113. The deepest weight is 220, where there were five state qualifiers and six wrestlers on the three teams.

106 pounds: Kai Burkett, Chestnut Ridge: Burkett had a heck of a sophomore season, going 35-6 with 18 pins and three technical falls. Burkett captured his second District 5 title and finished second at the Southwest Regional, where he won his semifinal showdown against Glendale’s Suds Dubler, 7-3, before losing to South Park’s unbeaten Joey Fischer, 4-3, in the finals.

He made the semifinals and placed fifth in his first appearance at the PIAA Class 2A Championships. A Mirror second-teamer last year, Burkett is 66-15 in two years.

113 pounds: Nathan Holderbaum, Chestnut Ridge: Holderbaum shined in the postseason, especially in a fourth-place finish at the state tournament after placing fifth at the Southwest Regional. He won his first three bouts at Hershey, including two by fall, to make the semifinals, where he lost to Forest Hills’ eventual champion Jackson Arrington, 6-1. The Ridge junior won a District 5 title and went 31-13 with 19 pins. He’s 60-27 in two years as a starter.

113 pounds: Hunter Walk, Tyrone: Walk went 31-13 with 15 pins and two technical falls as a sophomore. He placed third at the District 6 Tournament and fourth at the Southwest Regional to qualify for his first state tournament, where he went 1-2.

120 pounds: Roland Mills, Huntingdon: It was a breakout junior season for Mills, who went 31-12 with 13 pins and four major decisions. He finished fifth at the District 6 Tournament and was 2-2 at the Southwest Regional.

132 pounds: Kaden Cassidy, Bedford: After sitting out most of last season at Chestnut Ridge with a thumb injury, Cassidy went 36-2 with 15 technical falls and seven pins. He won a District 5 Tournament title, beating Everett’s Garret Cornell, captured his second Southwest Regional title with a 15-0 technical fall over Philipsburg-Osceola’s Chase Chapman.

Cassidy made the state semifinals, where he lost to Saucon Valley’s eventual champ Josh Jones, beat Cornell for the third time in overtime in the consolation semifinals, and finished third despite tearing his meniscus. He also finished third as a freshman at Bishop McCort.

138 pounds: Alex Richner, Moshannon Valley: The Black Knight junior makes the first team for the second time, with the first time coming as a freshman. Richner went 23-11 with nine pins wrestling between 132 and 145 and placed fifth at districts. He went 2-2 at the Southwest Regional, including a win over Northern Bedford’s Ian Sherlock, ranked No. 1 by the Mirror. Richner is 80-31 in three years.

145 pounds: Logan Marko, Central: The Scarlet Dragon senior is on the first team for the first time after going 28-13 with 11 pins wrestling between 145 and 170. Marko, who had 88 career wins, placed fourth at 145 at the District 6 Tournament and went 2-2 at the Southwest Regional, coming up a win shy of making the medal round.

152 pounds: Hunter Weitoish, Philipsburg-Osceola: Weitoish went 30-11 with eight pins in his sophomore season after jumping from 126 as a freshman. Wrestling with an ankle injury in the postseason, he placed fourth at the District 6 Tournament and fifth at the Southwest Regional, avenging a district loss to Moshannon Valley’s fellow first-teamer Jon Dale, 5-3, in the fifth-place bout. Weitoish went 2-2 at his first state tournament.

152 pounds: Jon Dale, Moshannon Valley: Dale is on the first team for the first time in his four-year career after going 30-10 with 16 pins. The Black Knight senior finished third at the District 6 Tournament for his third district medal and placed sixth at the Southwest Regional to qualify for his second state tournament. Dale went 118-37 in his career.

160 pounds: Cole Sossong, Portage: The Mustang senior had quite a senior season, going 43-8 with 18 pins and eight major decisions. Sossong finished second at the District 6 Tournament for the second straight year, and he placed for the fourth time. He finished third at the Southwest Regional, lost his first bout in Hershey, won three straight consolation bouts and took sixth at states. The school career leader in wins, Sossong went 137-34.

170 pounds: Derek Brown, Penn Cambria: Brown returns to the first team after going 38-5 with 22 pins as a senior, won his first District 6 title and finished third at the Southwest Regional, with his loss coming to McGuffey’s second-ranked Christian Clutter, 3-1, in the semifinals.

Brown, who battled a knee injury from football, made the state tournament semifinals, where he lost to Clutter, 3-2. He rebounded with two pins to take third place after placing sixth last season. Brown, who will wrestle at Clarion University, went 131-38 in his career.

182 pounds: Mason McCready, Hollidaysburg: McCready returns to the first team after going 31-7 with 15 pins, three technical falls and six major decisions. McCready won his second District 6 3A Tournament title and finished second at the Northwest Regional to qualify for his second state tournament. He went 2-2 in Hershey, coming up a win shy of earning his second medal.

The Bucknell University recruit went 103-45 in his career.

195 pounds: Damon Lemin, Tussey Mountain: Lemin, who was 17-13 last season, went 29-9 with 15 pins as a senior. He finished second at the District 5 Tournament, and he was a runner-up at the Southwest Regional, beating Bentworth’s returning regional champion John Vargo, 3-1, in the semifinals to make the finals. Lemin went 1-2 at the PIAA Championships.

220 pounds: Cory Johnston, Glendale: Only a junior, Johnston went 43-7 with 24 pins and was the last of three Vikings to win a District 6 title. He finished third at the Southwest Regional to qualify for his first state tournament, where he lost his first bout and won four straight consolations, including an avenging win over Hopewell’s Connor Forrest, and placed sixth. Johnston was 12-4 last season and is 72-20 in his career.

220 pounds: Duane Knisely, Chestnut Ridge: Also only a junior, Knisely went 35-8 with 21 pins, placed fifth at the prestigious Powerade Tournament and won a District 5 title. Knisely finished second at the Southwest Regional, losing by a point, 3-2, to Derry Area’s two-time state runner-up Dominic DeLuca in the finals. Knisely, who was 15-21 two years ago and is 78-42 in his career, went 1-2 at the state tournament.

285 pounds: Nate Simmers, Altoona: Simmers is on the first team for the first time as a senior after going 22-5 with 13 pins at 220 and 285. He moved up to 285 again for the postseason, won his second District 6 title and finished second at the Northwest Regional, dropping a 1-0 decision to Cathedral Prep’s eventual state champ Kawaun DeBoe in the finals. Simmers went 98-37 in his career.

SFU football still set to play LORETTO — The Northeast Conference announced on Thursday a delay for the return ...

Aidan Steinbugl went 3-for-3, scored a run and drove in another, and Austin Hammerle allowed just four hits and no ...

Ex-CC star feels fortunate for another shot on links