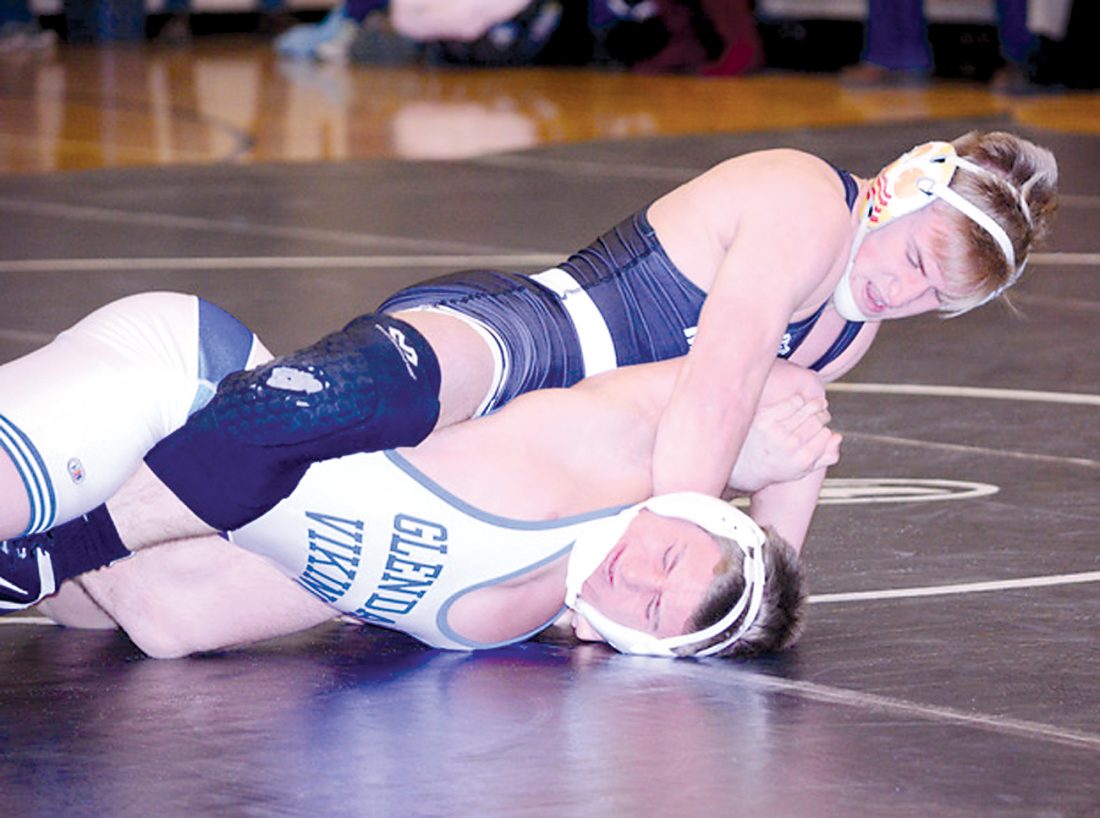 Photo for the Mirror by Rich Murawski Moshannon Valley senior 152-pounder Jon Dale heads to the postseason with a 23-4 record.

Moshannon Valley’s Jon Dale has wrestled in the District 6 Class 2A Tournament three previous years and has placed there twice.

A talented athlete who was one of the top running backs in the area this past football season and was a state qualifier as a sophomore, Dale is one of the favorites to finally win district gold as a senior this weekend at the AAHS Fieldhouse.

“This is the most excited I’ve been for the postseason ever since I was in the eighth grade,” Dale said. “I think I have a pretty good chance (of winning districts). Most of the top-seeded kids were at the West Branch tournament, and I won that. I think if I wrestle well, I should have it.”

“We expect him to be on top of the podium (at districts),” Mo Valley coach Thad Walstrom said. “He needs to score points in every match and have a high-paced offense.”

Dale was 31-5, placed third at 160 at last year’s district tournament and he was within one win away from making a return trip to Hershey when got pinned by Burrell’s Shaun Gates in 3:40 in the Southwest Regional consolation quarterfinals.

“I was winning in my match to go to states last year, and then I got mat returned. I thought I re-cracked my ribs,” Dale said. “I hurt them last year in the first football game. I don’t think they got fully healed. That’s been nothing but motivation to come back and place at states this year.

“I think I had it in my mind that I was just set on making it back. Whenever I lost, it was like a re-start, and it made me feel like I had to work more. I think losing my last match really got me thinking I need to win, and at least place (at states) because it’s my last year.”

Star senior wrestlers have to deal with pressure to succeed, but Dale says the pressure comes from others.

“I don’t really feel the pressure,” he said. “I don’t really get nervous. I hate losing, so I don’t want to lose, so I try hard enough to beat everyone.”

He hasn’t beaten everyone, but Dale is 23-4 with 13 pins and ranked No. 1 by the Mirror. Opposing teams have forfeited to him seven times.

“I think I’m doing fairly well,” Dale said. “I think I’ve changed a lot from how I was wrestling last year, and I think I’ve done better with conditioning too. I think I’m better on my feet now. I really haven’t had much time to wrestle on bottom, but I’ve been getting out faster every time I’ve been on bottom.

“My last loss, I was really sick with pneumonia. I don’t even know what really happened. My first loss, I didn’t get any matches in before that because I kept getting forfeits. I didn’t have any conditioning work other than practice. I think I was up 6-0 in the first period, and he came back and beat me.”

“Whenever he’s out there scoring points, nobody’s come close to him,” Walstrom said. “Whenever he puts it into cruise control, people can score points on him and have beaten him this year. He did that at the Penn Cambria tournament. He was beating that (Thomas Jefferson’s Alex) Weber kid, and he ended up losing, 9-6.”

“He was deciding where he was going to go at the end of last year,” Walstrom said. “He was on his way down to 154 (after the two-pound weight allowance), and he was struggling with the weight loss. So, he decided he was staying at 160 for the postseason, and I think once he saw kids he beat placed at 152, he got it in his head that he was going to go to 152 (for this season).

“He worked during the summer to keep his weight down. I was all for that because he’s a big 152-pounder.”

“I felt kind of bigger at 152 compared to a lot of people,” Dale said. “I just feel a lot stronger than everybody, and that’s a big key.”

Dale started wrestling when he was 5, and he was stronger than everyone else throughout elementary. He said his “major turning point” was in the eighth grade, when he finished fourth at the Pennsylvania Junior Wrestling Junior High Championships.

“I coached him when he was in seventh grade,” Walstrom said, “and we knew he had the technique then. We knew he was going to be a special kid. Coming out of elementary, he was more of a big move guy – headlocks, big moves with the head and arm – and his technique has improved so much over the years.”

Dale went 26-11 as a freshman, and he wrestled in the postseason at 145, but he didn’t qualify for the Southwest Regional.

“I beat some kids that were decent,” Dale said, “and then I lost to some kids I obviously should have beaten. I don’t know what my problem was then. I just don’t think I was into it that year compared to my sophomore year.”

Dale made it to Hershey as a sophomore, placing fourth at the district tournament and fifth at regionals. He was a win away from making the medal round at states.

“That was like the craziest thing that ever happened, honestly,” said Dale, who was 32-11 that year. “I knew that the bracket was tough, but I was in such a good spot that I made it right into the semis. I already got my ticket to Hershey, so that was pretty crazy. It was awesome.”

What makes Dale so tough is his leg wrestling, which he says he developed as a sophomore.

“I think I just tried it at practice one time,” he said. “I’d way rather be on top than on bottom. I love just wrenching on people’s arms.”

Along the way, he developed a friendly rivalry with West Branch’s Derek Yingling. They wrestled many times when they were sophomores, much to their chagrin.

Dale, who says he’s always on Instagram watch wrestling videos, especially Penn State’s Vincenzo Joseph, will be attending Mount Aloysius to study nursing. That means his wrestling career is over after this postseason.

“Honestly, I’m really going to miss wrestling,” Dale said. “I want to be a referee at least, or coach elementary. I get along really well with kids. My friend Micah (DeLattre) and I always talked about being coaches.”

Before he heads off to the Mount, though, his focus is securely on the postseason.

“I’m looking for some pretty tough matches to get me ready for states,” Dale said. “As long as I keep winning, it will keep pushing me forward.”