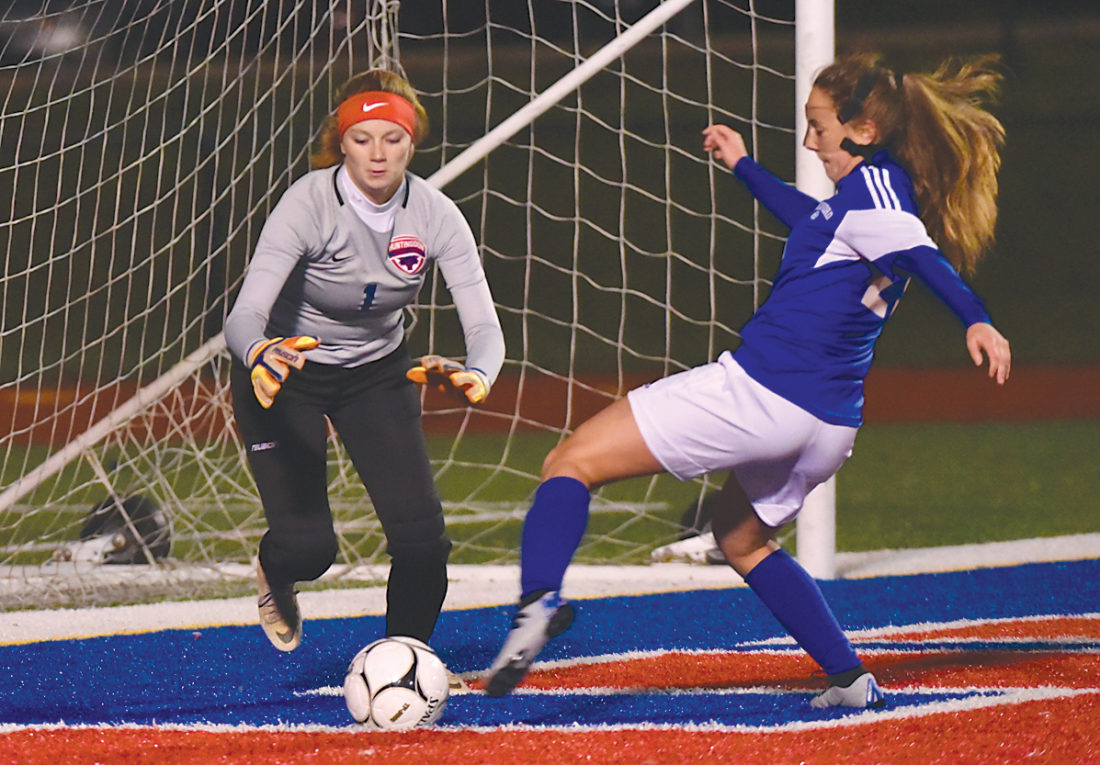 Photo for the Mirror by Roger Kerekes Bedford’s Taylor Downs is stopped by Huntingdon keeper Mallory Woodward on Monday.

The winner will play Somerset for the district championship on Thursday at a site and time to be announced. Bison coach Jeff Thomas expressed hs excitement for Bedford’s return to the championship match.

“You’re always excited. You’re excited for the kids,” he said. “They’ve worked hard since last year. We’ve got a lot of young kids on the team. They’re improved from the beginning to right now.”

Huntingdon (11-6-2) played evenly with Bedford during most of the first half.

“We came in with a game plan. We executed that to a ‘T,'” Bearcats coach Michael Armstrong said. “We frustrated them for all but 20 minutes of the game.”

“We moved the ball well, I thought, in the first half. But (on) some of our runs their defense was keeping their shape pretty well on us,” Thomas said.

Thomas remained unconcerned, even as the match resumed scoreless through the break.

“I knew we were going to get one for sure,” Brown said. “But they were definitely an aggressive team. We’ve always been kind of a second-half team with the scores late in the game. But I wasn’t worried at all.”

Bedford spent nearly the entire second half in Bearcats territory. Bison goalkeeper Lindsey Mowry spent most of the last 45 minutes as an onlooker.

“The runs were better in the second half, which opened up better scoring opportunities (and) we got more shots on goal,” Thomas said.

Bedford kept up the pressure throughout the second half, however. Brown squeezed through the Huntingdon defense and squibbed a kick past Huntingdon goalkeeper Mallory Woodward with 16:04 left.

“I think it was Amber (Thomas) who was dribbling (the ball) up. And the ball was kind of shot out to the other side, and it richocheted off Taylor (Downs),” Brown said. “I saw the Huntingdon defender. And I just kind of cut right in front of her and kicked it in the corner.”

“I don’t think they wore us down,” Armstrong said. “I think they got a lucky break. If you don’t rotate officials in the last 20-something minutes, that’s still a foul.

“(It was) kind of a gift, to be honest. But that’s the way it works sometimes.”

Amber Thomas added a second goal three minutes later off a free kick to set distance between the top-seeded Lady Bisons and Huntingdon. Armstrong was more than willing to give props to Thomas for that play.

“That was a well-placed shot. You give that girl 10 opportunites, she’s going to hit eight of them,” he said. “You don’t put a ball into the side netting from that distance without any skill.”

First half: No scoring.