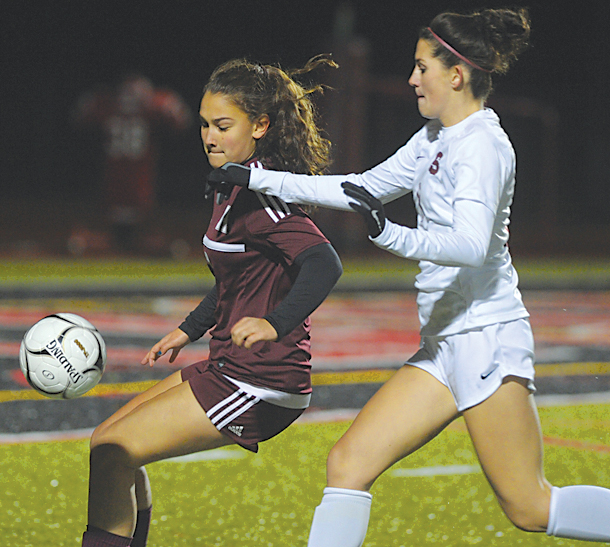 LORETTO — The Altoona Area High School girls soccer team won a program-high 13 games this year to earn the No. 1 seed in the district playoffs for the first time ever, but to win a district crown, the team would have to do something that it hasn’t done since 2007 — knock off State College.

The young Lady Lions squad was not quite up to the task, however. State College took home another District 6 championship with a 3-0 win in the 4A title game Monday at Saint Francis University’s DeGol Field.

Josie Garrigan scored 58 seconds into the game for a quick 1-0 lead, and Erica Feese tacked on two more less than 5 minutes apart in the second half to sew up the school’s 11th straight D6 title.

Garrigan’s goal, her first of the season, came off an assist from May Bokenewicz on the team’s first first shot of the game.

“We just came out with really high intensity,” Garrigan said. “I bent it around a couple defenders right in the corner. I don’t think the Altoona keeper really saw it,” Garrigan said.

Lauren Kiser nearly tied the game 10 minutes later, but her shot off a crossing pass sailed just over the crossbar.

After Altoona keeper Julia Lane made a pair of saves off a State College corner kick with 9 minutes left in the half, State College keeper Jenny Mejia made a save on a Cassie Kyle shot from in close at the 7:30 mark to preserve her team’s slim advantage.

Feese’s first goal came with 33:13 left in the game off an assist over the top from Makenzie Graham.

“Erica’s been a solid scorer for us all year long. When she has the ball at her feet, she’s dangerous no matter what,” SC coach Doug Bates said. “It might look from the spectator’s point of view as an easy goal to make. Up and over, run up to it, beat the keeper and in, but that first touch is huge. She consistently puts the ball where she can finish.”

Moments later, Morgan Sarver nearly halved the SC lead, but Mejia made a sprawling save on a low shot to her right. Darrian Berkheimer got the rebound near the goal line, but her crossing pass was intercepted by a State College defender and cleared.

Feese then made it 3-0 at the 28:47 mark on a similar play as her first goal. This time the pass came from Alison Houtz, who scored the only goal in the Little Lions’ 1-0 win over Altoona in last year’s championship game.

“Both times, the ball was played in that space where it’s tough,” Winterburn said. “We want Julia to play high and try to eliminate that ball over the top. She came out and did really, really well with it. Erica just made a touch around her and finished. That’s such a hard finish. Yeah, it’s an open net, but you’re still 20 yards out.”

“This was an incredible season,” senior Grace Dull said. “It really brought back the joy in playing soccer. It felt like a family. We’re so close. It was a great environment, and the wins just made it that much better.”

The vast majority of the Altoona roster returns next season and will look to build off this year’s success.

“We have three seniors — Grace, Julia Wise and Breanna Wuchovich. I can’t speak enough about what they do. Showing up day in and day out, putting the work in. They’re great leaders for the younger players,” Winterburn said. “Everyone bought in, and it showed. I’m proud of everything they’ve done this year.”

State College (11-7-1) advanced to play the winner of Wednesday’s McDowell-Erie District 10 championship game in a District 6-10 subregional match. The winner of that qualifies for the state playoffs.