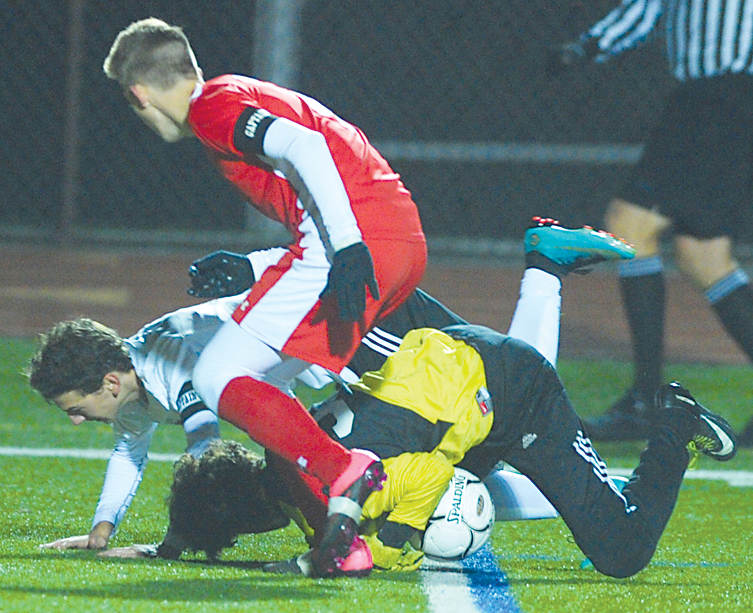 WINGATE — It’s hard not to smile when young people persevere through adversity to accomplish a common goal.

For the Bellefonte Red Raiders, Tuesday’s District 6 Class 3A championship game on a very cold night at Alumni Stadium at Bald Eagle Area High School was the culmination of a couple of years’ worth of struggles, and the night belonged to them.

Forward Evan Nyquist took a pass from Gabe Koller and pooched the ball over the head of keeper Andrew Roberts of Tyrone to give the top-seeded Red Raiders (10-2-1) the first District 6 Class 3A boys soccer title in program history with a 2-1, come-from-behind victory over resilient Tyrone.

“I am very proud (of my guys),” Bellefonte coach Scott Martz said. “We’ve lost the last two in a row of these. I told our AD and bus driver on the way here, out of all of my Bellefonte teams this team deserves it more than anybody. These seniors have just stuck together, they’ve played so well, played hard, and they deserved this game tonight.”

The Red Raiders found themselves down 1-0 with 10 minutes remaining until halftime when Tyrone midfielder Corey Johnston scored the game’s opening goal on a free kick.

“The goal put us up, and it gave us the motivation to keep going,” Johnston said. “But they got a lucky goal and our heads kind of dropped. In the second half, we came out and picked up our heads and played as a team. If we play as a team, anything goes.”

“What a beautiful shot Corey hit,” Martz said. “We’ve been down 1-0 before this year, and it seems to motivate our guys when they get down. I told them at halftime we’ve had opportunity after opportunity to score, you just have to finish. You have to be aggressive and finish your shot.”

Roberts had five saves in the first half for Tyrone and nearly took a shutout to the break before Red Raider midfielder Dan Persiko punched in a goal with 1:04 until the horn the knot the game up at 1-1.

Bellefonte had the experience in big games having lost in the title game the previous two seasons, and that experience showed when it counted.

While Tyrone was able to control the ball and produce some scoring chances, it did not produce a go-ahead goal and kept letting Bellefonte take the ball back into its offensive zone.

“I think we really took control in the second half,” Tyrone coach Nick Miler said. “We played a lot better, but we just couldn’t find the back of the net. Hats off to Bellefonte, they’re really good at doing this. They know how to score, they know how to finish.”

Nyquist put the ball just out of Roberts’ hands for the goal that ended up being the difference-maker.

“It’s a great feeling, its never been done in the history of our school,” Nyquist said of helping lead his team to victory. I’m excited to see how far we can go. We’ve got momentum right now going to states. We’ve never been there, but we’re expecting some good competition.”

Miller said that the Golden Eagles have struggled in the scoring department all season, but again gave a tip of the hat to Red Raider keeper Zack Spearly, whose 10 saves in the second half and 13 total for the game helped Bellefonte nearly as much as the opportune scoring.

“He made some dynamite saves for them, but sometimes, you score and sometimes you don’t,” Miller said.

“We’ve been coming here for three years, I’ve been to every single one as a back-up, and to finally be able to play it — (my teammates) played their hearts out and it’s just time we were finally all able to step up and play the best game I’ve ever seen a defense play,” Spearly said. “Everyone stepped up for us, and I couldn’t have asked for a better season.”

Tyrone ended its season at 8-11 and will graduate five seniors from this squad in the spring, including Caden Brooks, Nicholas Kosko, Skyler McCaulley, Andrew Pearson and Owen Shaulis, but return Johnston, Roberts and a slew of other juniors and sophomores in 2019, leading Johnston to believe the hope of returning for a shot at next year’s title is absolutely on the table.

“I think the junior varsity team has some pretty good talent” Johnston said. I think, going into next year, if we put in the work, we’ll be right back.”