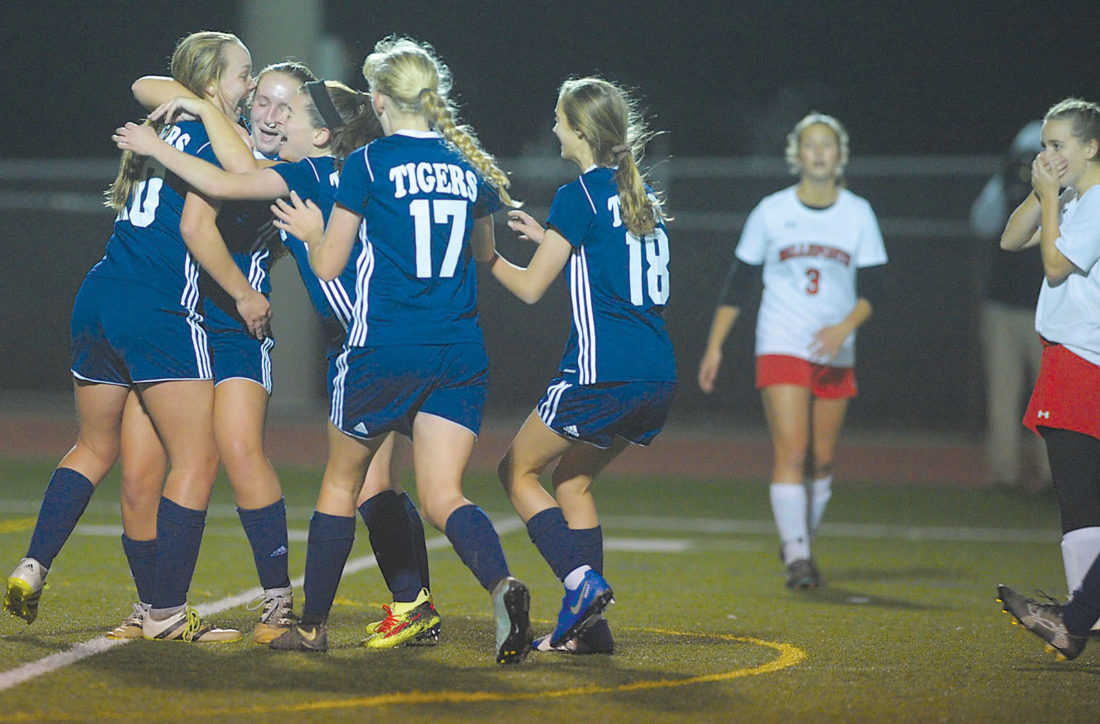 The Lady Tigers accomplished their goal, but it wasn’t easy against Bellefonte.

The Lady Tigers captured their third straight District 6 Class 3A title and the program’s fifth overall when sophomore Alyssa Bell scored with 6:08 left in overtime to secure a 2-1 victory over the tough Lady Red Raiders on a chilly Tuesday night at Bald Eagle Area’s Alumni Stadium.

“It feels great,” Bell said. “I had so many missed chances in the first half and the beginning of the second half, and it felt good to finally put one in.”

When they received their individual medals, the Lady Tigers screamed and jumped up and down as they hoisted the championship trophy.

“It feels amazing as a team to bond together and win this three-peat as a team and for our school,” sophomore Rita Kendziora said. “Bellefonte is a very great team. We’re so honored to play them. It was a battle the whole entire game.”

“This year’s goal for a lot of them was they wanted to three-peat,” Hollidaysburg coach Dave Soellner said. “They had the capability of doing that. We struggled at times tonight, but we were able to dig deep, put the pressure on them in overtime and get the winning goal.”

Hollidaysburg (14-4) advanced to the PIAA playoffs play-in game, where it will play District 9 champion Bradford at 5:30 p.m. on Thursday at Alumni Stadium. The winner will play in the first round of states next Tuesday against the District 7 champion.

“I tell my girls ‘If you come to play the way you know how to play, you going to be hard to beat,'” Soellner said. “I’m a big believer in this whole group.”

Hollidaysburg had a number of opportunities throughout the game to score more goals, but Bellefonte goalkeeper Cati Besch had a heck of a game, making 14 saves.

When junior Jadyn Gallaher passed the ball to Bell, though, she seized the opportunity and booted the ball past Besch.

“When I first got the pass, I thought I was offsides,” Bell said, “but I saw there was a defender behind me, and I put it in the back of the net.”

“Alyssa has been close the last three games – off the post, just missing,” Soellner said. “We keep telling her that you’re going to get that one. It was a nice ball played into her, and she turned and was able to score.”

It was the second time Hollidaysburg beat Bellefonte, 2-1. The first time was on Sept. 1 in the consolation game of the Raider Classic Tournament.

“We came to win,” Miller said. “It was an unfortunate last ball there that didn’t go our way. I think Hollidaysburg is a good team, and I think we’re just as good. I think it could have gone either way.

The Lady Tigers finally broke through at the 17:30 mark of the first half when Kendziora rushed ahead of a breakaway and booted the ball past Besch.

“You try to get her into space and she’s hard to beat in space,” Soellner said. “We try to get her to keep attacking because I think she can take a lot of people one on one and be successful with it.”

Hollidaysburg had other chances to score in the half. Junior Sidney Pohar’s shot on goal was stopped a few minutes after Kendziora’s goal. Bell broke away from the pack and took a shot, but Besch made the save again.

“That’s the way it’s been most of the year, getting a lot of shots,” Soellner said. “Once they start scoring, they’re hard to stop, but when start missing that many, you start to get frustrated.”

Kendziora had a shot at another goal with about 4:30 left in the half, but her boot was stopped. The Lady Tigers spent most of the first half on Bellefonte’s side of the field, and Kendziora, the team’s leading scorer, controlled the ball much of the time.

“She does a lot for us,” Soellner said, “winning the ball, getting opportunities and I’m glad she’s on our side.”

The Lady Red Raiders (10-8-1) tied the score at the 30:04 mark of the second half when Mallorie Smith sent a ball past Hollidaysburg goalkeeper Megan Cutshall off an assist from Mia Johnson. Cutshall made six saves in the game.

Hollidaysburg nearly won with about 12 seconds left with a shot on goal, but the ball hit the side of the net.

Kendziora, freshman Natalie Despot and freshman Lizzie Johnson had chances to score in overtime as the Lady Tigers kept the pressure on, but they were all turned away by Besch.

And then Bell rang up the winning shot.

“We played even harder in the overtime,” Bell said, “and it all paid off.”