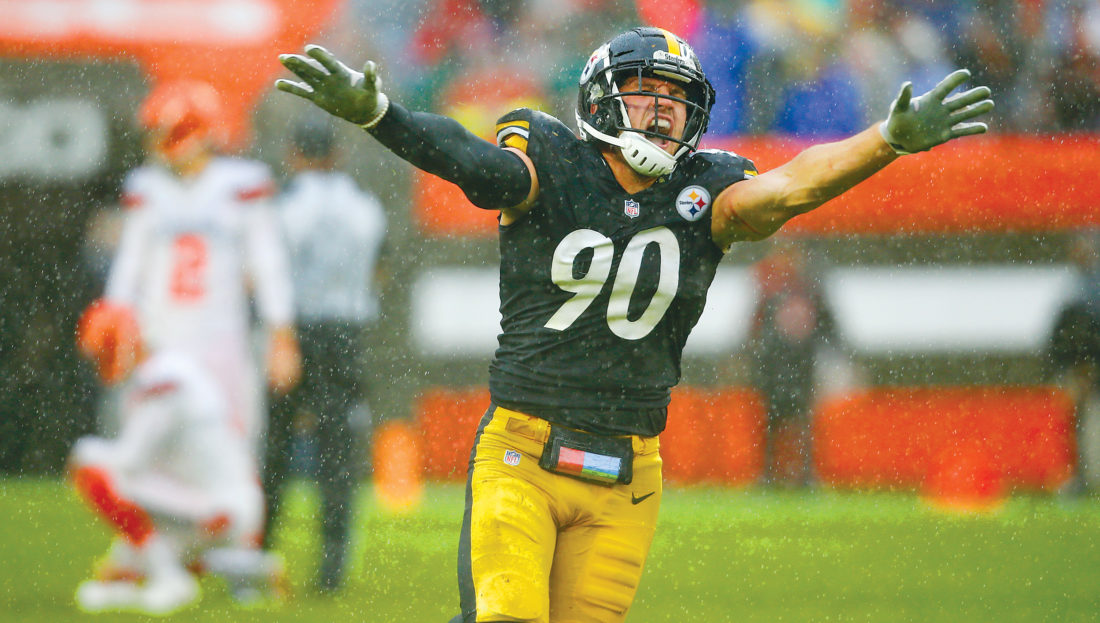 Pittsburgh Steelers linebacker T.J. Watt reacts after the Browns field goal was blocked in overtime during an NFL football game, Sunday, Sept. 9, 2018, in Cleveland. The Browns and the Steelers tied at 21. (AP Photo/Ron Schwane)

CLEVELAND — One week in and the Browns are still undefeated.

Cleveland ended its 17-game losing streak on Sunday with a 21-21 tie against the Pittsburgh Steelers, who prevented the Browns from getting their first victory since 2016 when linebacker T.J. Watt blocked Zane Gonzalez’s 43-yard field-goal attempt with 9 seconds left in OT.

The Steelers, who blew a 14-point lead in the fourth quarter, also wasted their chance to escape with a win when Chris Boswell was wide left on a 42-yard field-goal attempt with 1:44 remaining in the extra period.

“If you don’t win,” Steelers quarterback Ben Roethlisberger said, “it feels like a loss.”

The Browns remain winless since Dec. 24, 2016, but at least they have a positive after going 0-16 last season, just the second team in history to lose all 16 games.

Pittsburgh committed six turnovers, including a strip-sack fumble of Roethlisberger late in OT that had the Browns poised to win their first opener since 2004.

But Gonzalez’s kick was low and Watt, who had four sacks, got deep penetration and appeared to get his hand on the ball, which went sideways and landed on the soaked FirstEnergy Stadium turf as thousands of Browns fans threw up their hands in disbelief.

So close. So far.

“They broke through and were right there, so there wasn’t much I could do about it,” Gonzalez said. “It was blocked. We felt good about it when we went out there. They definitely were in there a little quick.”

Browns coach Hue Jackson felt the Steelers were offside on the climactic kick.

The Browns also had a chance to win it in regulation and were driving for a potential game-winning field goal, but Tyrod Taylor’s deep pass for Josh Gordon was underthrown and intercepted by Cameron Sutton with 16 seconds left.

“There is nothing to be excited about, nothing at all,” said Gordon, who missed most of the past four seasons because of drug suspensions. “We don’t come to work to get ties. It’s the equivalent of a loss to me.”

The Steelers played their opener without star running back Le’Veon Bell, who remains away from the team in a contract dispute. As Bell continued his holdout in warm and dry South Florida, James Conner filled in and scored two touchdowns while running for 135 yards — just nine fewer than he gained as a rookie last season.

Roethlisberger threw three interceptions in the first half and finished 23 of 41 for 335 yards, throwing a 22-yard touchdown pass in the fourth quarter to Antonio Brown.

Down 21-7 in the fourth quarter, the Browns were on the verge of their 18th straight loss.

But they forced a fumble by Conner and scored quickly on Carlos Hyde’s 1-yard run to pull within a touchdown.

Cleveland’s defense then forced a punt before Taylor connected with Gordon, who was playing in his first opener since 2012, made a gorgeous leaping catch in the corner over Steelers cornerback Cameron Sutton.

In his debut with Cleveland, Taylor completed 15 of 40 passes for 197 yards.

Cleveland gave up seven sacks and committed 11 penalties, including four on false starts.

Browns rookie cornerback Denzel Ward intercepted Roethlisberger twice in his NFL debut. Both picks by the No. 4 overall selection came in the first half.

“We got guys who can get the ball and are ball hawks,” defensive lineman Myles Garrett said. “Denzel is one of them.”

Steelers: CB Joe Haden injured his hamstring in the second half and did not return.

Browns: DE Emmanuel Ogbah left briefly with an ankle injury in the first quarter but returned.

It was a tough week for Browns rookie guard Austin Corbett. First, the No. 33 overall pick was replaced in the starting lineup when coach Hue Jackson slid Joel Bitonio back to left guard and put undrafted rookie Desmond Harrison in at left tackle. Corbett figured to be a backup on game day, but was one of the club’s inactives.