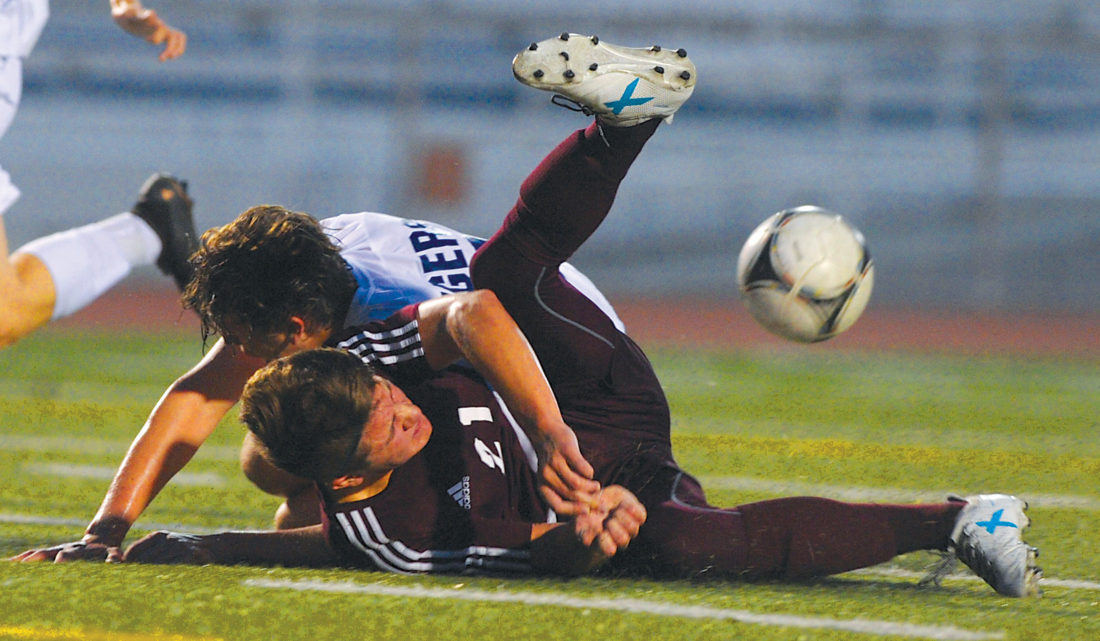 Mirror photo by Gary M. Baranec Altoona’s Austin Kravetz collides with Hollidaysburg’s Jesse Clayton, who was attempting to break up a shot attempt.

No matter the sport or time of year, an Altoona-Hollidaysburg matchup is usually entertaining.

The boys soccer teams of the Blair County high schools hooked up on the Mansion Park turf Thursday night, and overtime was needed before a decision was reached.

Altoona’s Alex Berardinelli scored with 4:23 remaining in the first overtime to lift the Mountain Lions to a 3-2 victory over the Golden Tigers in a battle of District 6 defending champions.

“It’s nice to get a rivalry right out of the gate,” Altoona coach Dave McCarter said. “It’s always fun to play them. It was an exciting win.

“It’s one of those where you can throw out the records,” McCarter continued. “It’s always a good matchup.”

Altoona, which returns a half dozen starters from last season’s District 6 Class 4A champions, improved to 2-0 on the young season. Hollidaysburg, which lost most of its regulars from last year’s D6-3A champs, fell to 1-2.

“It was entertaining,” Hollidaysburg veteran coach Craig Shale noted. “That’s a good advertisement for local soccer. It would be nice if more people came out to watch.

“It was end to end; both teams went at it,” Shale offered. “Somebody has to win, and somebody has to lose. I’m not a fan of the Golden Goal. I mean one goal. I think they should just let them keep playing.”

But, they didn’t, and Altoona won it with the quick score in overtime.

“It was a heads-up play,” McCarter said. “There was no hesitation by Austin Kravetz. He was at about the 45 (-yard line) and saw their defense was slow getting back and Alex (Berardinelli) was already at the end of their line.

“(Kravetz) knew if he could pop one over the defense Alex would have about 20 yards to play with it,” McCarter said. “(Berardinelli) got just enough of it that (Hollidaysburg keeper Evan Shale) their goalie couldn’t get a hand or body part on it and he could just keep going and tap it in on the second touch.”

Berardinelli, a junior, gave credit to sophomore Kravetz for the game-winning play.

“He made the play happen,” Berardinelli said of Kravetz. “I looked back and saw him. I just got the ball and put it in. I just added a little insurance on the second tap.

“It was a big game for us,” Berardinelli said. “It’s always one of the biggest of the year and we’re happy to come out with a win.”

After a scoreless first half, Hollidaysburg freshman Braden Callahan scored nine minutes into the second half to give the Tigers a 1-0 advantage.

Altoona answered with a pair of goals off corner kicks. Berardinelli scored on a rebound with 23:25 left and Zachary Kowalski put the Lions ahead 2-1 with a goal at the 20:30 mark.

Grant Glass got the equalizer for the Tigers with 6:25 left in regulation.

That set the stage for overtime and Berardinelli ended it quickly, thanks to the heads-up play by Kravetz on the free kick from midfield.

“It was a tough goal to lose on,” coach Shale said. “It was a quick free kick and took a little deflection. But, both teams had their chances to win. It was a nice even game of soccer. We didn’t play well our first two games, and this one showed what we’re capable of doing.”

The teams will meet again Thursday, Oct. 11 at Hollidaysburg.

“Both teams were a little sloppy tonight,” McCarter said. “I’m sure we’ll both be a lot sharper when we meet at Tiger Stadium.”