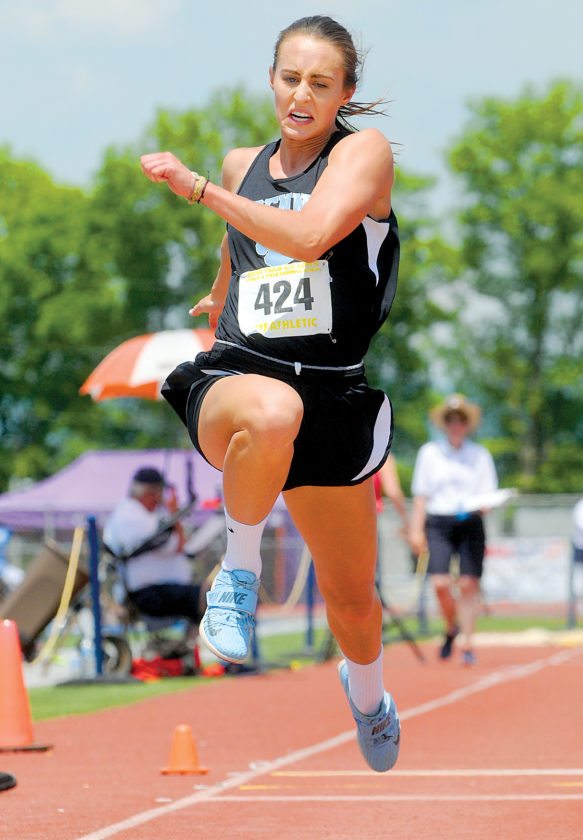 Photo for the Mirror by Teri Enciso Penn Cambria’s Lauren Michina captures a bronze medal in the triple jump on Saturday.

SHIPPENSBURG — Day two of the PIAA Track and Field Championships at Shippensburg University’s Seth Grove Stadium featured more hardware won by area athletes as they fought through a hot and hazy Saturday to stand on the podium and win a coveted state medal.

In the four-by-800, Kaschalk, the lone senior on the team, got off to a strong start for the Lady Devils, settling into second place after the first 800 meters.

“My thought is always getting the baton to McKenna in the best spot possible. I’m always thinking about my teammates, and I wanted to get out to the best start possible,” Kaschalk said. “I knew I had to get off to a strong start, push myself to the finish and hand it off in a good spot for everyone. I work for my team. This is a team effort. I think we all went out and did an amazing job today. I’m really proud of our efforts.”

Hayward, a junior, took over for the second leg and maintained the pace for her two laps.

“Carly gave it to me in a good spot, and I knew I had to open up a gap a bit and get the baton in the same spot. I tried to get a good lead and was able to do that,” Hayward said.

Vrabel, just a freshman, showed no sign of nerves running the third leg.

“I just focused on getting the baton to Paige and helping out my team,” Vrabel said. “It never really crossed my mind about being a freshman down here.”

Wess, a junior, anchored the team to the silver medal. Central Cambria now owns two gold and a silver with Wess as part of the 3200 squad. Neumann Goretti stole the show with a winning time of 9:16.65.

“They (Neuman Goretti) were strong. I’ll take second in the state championships any day. First is amazing, but second is pretty good,” Wess said. “I knew the other teams were coming behind so I just pushed to reach the top group and go as hard as I could. To win two golds and a silver is amazing.”

To close out the day, the same four girls had already clinched a medal by just finishing the 1600 relay race. They ended up with a seventh-place finish in the event — the third consecutive year Central Cambria has finished seventh in the 1600 relay.

Wess also added to her medal total with a fifth place in the 800 run in a time of 2:18.28. The Red Devil junior now owns seven career PIAA track medals.

“It was different than most 800s where the pace changes. I figured I would just stay with the group and give it all I have at the end, and I was able to do that,” Wess said. “When I was a freshman, I never thought I would accomplish what I have, and it’s nice I still have another year to try and win some more.”

Engle, a senior, improved on last year’s fourth-place finish with a jump of 44 feet, 11 inches, just off his personal record of 45 feet. Marco Maffeo of South Park won with a jump of 46-2.

“I’m feeling good. I’m a little sore with all the jumps. I feel like I did well when the clock started. I’m pleased with my performance,” Engle said. “That one kid (Maffeo) busted out a 46, and that’s just amazing he did that. I didn’t hit a PR, but I’ll take what I get. I honestly thought I’d get fourth or fifth with some of the jumps some other guys had coming in. I’m glad I got third. Third place in the state is great.”

Michina won her second bronze medal this weekend (she took third in the high jump on Friday) and her third medal overall to close out her high school career in impressive fashion. Michina jumped 37-9 in the finals. Breana Gambrill of Athens won with a jump of 38-3.

“I’m so happy. It was definitely my goal this year to get two medals, and with both of them being bronze makes me even happier,” Michina said. “It’s crazy hot. It was definitely a struggle, but you had to fight through it. It wasn’t my best performance today. I had a scratch, and my leg gave out on one. I could have done better, but I’m so happy with bronze and the jumps I did get in.”

Maxwell, just a sophomore, won her first medal at Shippensburg with her fourth place in the 400 with a time of 58.11. Neumann Goretti’s Mykala Perry won the event at a time of 55.10.

“I think for the hot weather I ran pretty well. I get overheated a lot. I’m pretty excited about my performance even though I didn’t run my best in the 400,” Maxwell said.

“I was really tired for the 800. I’m hot, but my legs feel pretty good,” Maxwell said. “I came down here hoping to medal in at least one of my races, and I was able to do that. I’m happy.”

Gerwert won her second state medal in the pole vault after finishing with a silver last year. She cleared 11 feet for her seventh-place medal. Morgan Gossard of Richland won with a vault of 12-6.

“I’m grateful to have medaled here twice against the girls I’ve had to compete against. I could have done better today, but I’m not going to focus on that. It’s been a good four years,” Gerwert said. “I don’t want to make excuses. It was a mental thing today. I was working with a new pole, but I should have had my last jump.”

Miller was somewhat of a surprise, since he was the lowest seed among the 20 competitors in the 2A boys pole vault. Miller cleared 12-0 at the District 5 Championship, while the 19 others had cleared at least 12-6 at their competitions.

Miller, a senior, peaked at the right time, beating his district height by 1.5 feet and his personal best by half a foot. He was one of three to finish at 13-6 and wound up with a seventh-place medal.

“It wasn’t my best performance but I’m glad I got a medal. It’s been a great four years. I’ve had a lot of fun,” Miller said.

Joe Jardine of Schuylkill Valley won gold with a distance of 16-3 — a new PIAA record.

Murphy made her third trip to states count again with an eighth place in the triple jump with a distance of 36-7. The junior will return for another chance to medal.

“I’m really excited. I didn’t do as well as I wanted, but I’m so happy to get on the podium and medal,” Murphy said. “I didn’t PR, so I need to practice hard through the winter again and, hopefully, do better next year.”

Central Cambria and Penn Cambria finished tied for 14th place with two other schools in the girls 2A team race.