McCoy upset in 2A final 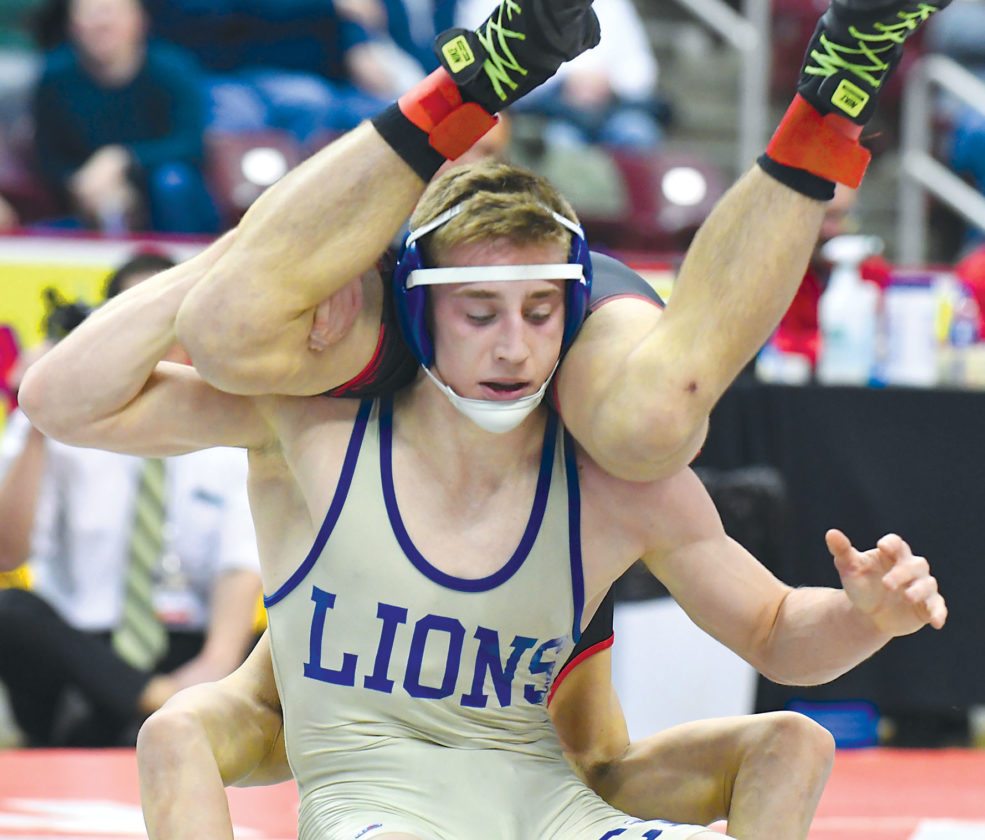 Photo for the Mirror by Tami Knopsnyder Chestnut Ridge’s Justin McCoy drops an 8-1 decision to Frazier’s Thayne Lawrence in the 152-pound final in Hershey on Saturday afternoon.

McCoy, a 2017 state champion, suffered a shocking 8-1 loss to Frazier sophomore Thayne Lawrence in the PIAA Class 2A Championships Saturday afternoon at the Giant Center. McCoy had majored Lawrence, 10-1, in the Southwest Regional Tournament finals.

“It’s kind of disappointing,” McCoy said. “The whole season was great. I wouldn’t take anything back. I’m still a state champ, although I didn’t get it this year. I wanted to be a two-timer, but it didn’t happen, and I’m thankful for what I have. I’m thankful for my family and everyone in my life.”

“I always like to win, but I got second,” McMillen said. “I have to move on, and I’ve got three more years of it.”

“It’s the best feeling in the world,” Boozel said. “All that hard work finally paid off. It’s my senior year, and I got it done.”

Everett junior Garret Cornell (126) and Ridge’s Jared McGill (160) finished third in their third state tournament appearances. For McGill, it was his third state medal, while Cornell earned his first.

McCoy was never able to get his offense going against Lawrence, who countered a McCoy shot in the first period for a takedown with 10 seconds remaining.

McCoy escaped in the second, but Lawrence took him down again and got two nearfall points. Lawrence rode the rest of the period to take a 6-1 lead into the third.

“I just didn’t start my match off well,” McCoy said. “I gave up that takedown and tried to come back. I don’t know. I don’t think I moved my feet as well as I could have. He’s pretty good on top. I was able to get out from him at regionals, but things didn’t go my way.”

Usually very tough on top, McCoy (45-2) couldn’t turn Lawrence (30-2), who reversed in the third and rode him the rest of the way. Lawrence pumped his fists in celebration, while the Ridge side was stunned.

“He just didn’t get his flow going,” Lazor said. “He couldn’t get his angles on his shots and just couldn’t get into his legs. He made a couple mistakes, got behind in points and it kind of snowballed up on him a little bit.

“But the match isn’t going to define the young man. He’s worked harder and has done as much for anybody in this sport and our program as I have known.”

McCoy, the first four-time medalist in school history, got lots of hugs from family, friends and coaches after coming down off of the medals stand. Known for his positive attitude, McCoy was still able to smile and pose for photos.

“He’s just a good kid,” Lazor said as he tried to fight back tears. “He knows the important things in life and what’s going to make the man he’s going to be. He knows there’s more to do yet.”

McCoy, a Virginia recruit with 167 career wins, will now prepare for college and more offseason wrestling.

Boozel (38-3) set the tone early as he scored a takedown out of a flurry with McMillen hanging over his back. He also scored two nearfall points out of the stack position at the end of the flurry for a 4-0 lead.

McMillen rode tough in the second until Boozel reversed with 20 seconds left. McMillen escaped with 4 seconds left in the period to make the score 6-1.

McMillen took Boozel down with 33 seconds left in the bout, but Boozel escaped. McMillen wasn’t able to get another takedown, and time ran out. McMillen shook the Mount Union coaching staff’s hands and ran off the mat.

Boozel handed McMillen (41-4) all four of his losses this season, including in the finals at District 6, Southwest Regional and states.

“He’s a scrapper,” McMillen said. “It’s just something with our styles. I think he has a little bit more mature strength. He’s just a tough wrestler.”

“I think that bothers him the most,” Dubler said. “He knew this was his last chance to wrestle Josh, and that’s the guy he wanted to beat.”

With three years left in his career, the future appears bright for McMillen, who was the first finalist for Glendale since Tom Ross in 1986.

“I thought I could win as a freshman, but I came up short,” McMillen said. “I’ll probably be back training tomorrow or the next day.”

McGill, who shocked the crowd on Friday by beating Wyalusing’s returning state champ Creighton Edsell, 4-2, beat Edsell again on Saturday in the third-place bout. This time, with the score 2-2 in the second, McGill reversed Edsell to his back and pinned him in 2:32.

“It feels great to come back and be a state champion twice in one weekend,” McGill said. “He went to use a crab ride, and I sat back and flipped my hips on him and took him right to his back and pinned him.”

“I couldn’t be prouder of the kid,” Lazor said. “I think I’m as proud of him right now as I would if he won the state championship.”

McGill (46-1) was still motivated from his shocking 8-7 loss to Port Allegheny’s Jacob Kallenborn in the semifinals. Northwestern Lehigh’s Caleb Clymer beat Kallenborn, 8-0, in the finals.

“I wanted to go out there and right that wrong,” McGill said. “It feels good to come back and get third and prove that I was the best in the bracket. I just had a little slip-up in the semifinals and gave up a five-point move, and it was too much to come back from.”

With his third state medal hanging on his neck, McGill can look forward to his senior season.

“Third isn’t good enough,” he said. “I have to come back here next year, and I have to get first. I have to fight, scratch and claw, whatever I can do to win next year.”

Cornell defeated Cambridge Springs’ Tye Varndell in overtime, 5-3, in the third-place bout. Varndell received a stalling point late in the bout to tie the score. Cornell took Varndell down in overtime midway through the period for the win.

“It was a really tough match,” Cornell said. “I just gave it my all for that takedown. I didn’t fully understand why I got that, but it’s just part of wrestling. You just need to forget about it and keep going on through your match.”

“Hey, we’ll take it,” Everett coach Rob Ripple said. “Garret wrestled well all weekend, and the match that we lost, we felt we could have won. I’m very pleased, and I know Garret is pleased.”

Cornell (39-4) can now look forward to his senior season, but he was still treasuring his 5-1 performance in Hershey.

“It just feels unreal at the moment,” he said. “Am I still sleeping? Is it a dream? It just seems to be too real to be true, kind of.”

Fisher (45-7) earned a 10-6 win over Jamestown’s Khalil Messai in the fifth-place bout. Messai headlocked Fisher to his back in the second period, but Fisher had a big third period, reversing Messai to his back for five points. He added more back points later in the bout.

“He had a great season and great career. I’m just really proud of him right now,” Huntingdon coach Jon Mykut said. “He faced some adversity. He had a big third period. It’s kind of the way he wrestled his whole career. He just kept coming and didn’t stop.”

Brown (36-8), who fell to Susquehanna Township’s now two-time state champ Edmond Ruth, 15-9 in the semifinals on Friday, lost to Southmoreland’s Jaden Datz, 5-2, in the fifth-place bout.

“We’ve seen it many times, that semi slide,” Penn Cambria coach Todd Niebauer said. “He was happy to be here, but he battled the state champ to the brink, and then you kind of have that letdown. But that doesn’t take anything away from what he’s done. He’s on the medals stand as a junior. He knows what he needs to do be higher on it next year, if not hopefully at the top.”

Swab (33-8) closed out his senior season with a 5-0 loss to Saucon Valley’s Jason Jones in the seventh-place bout.