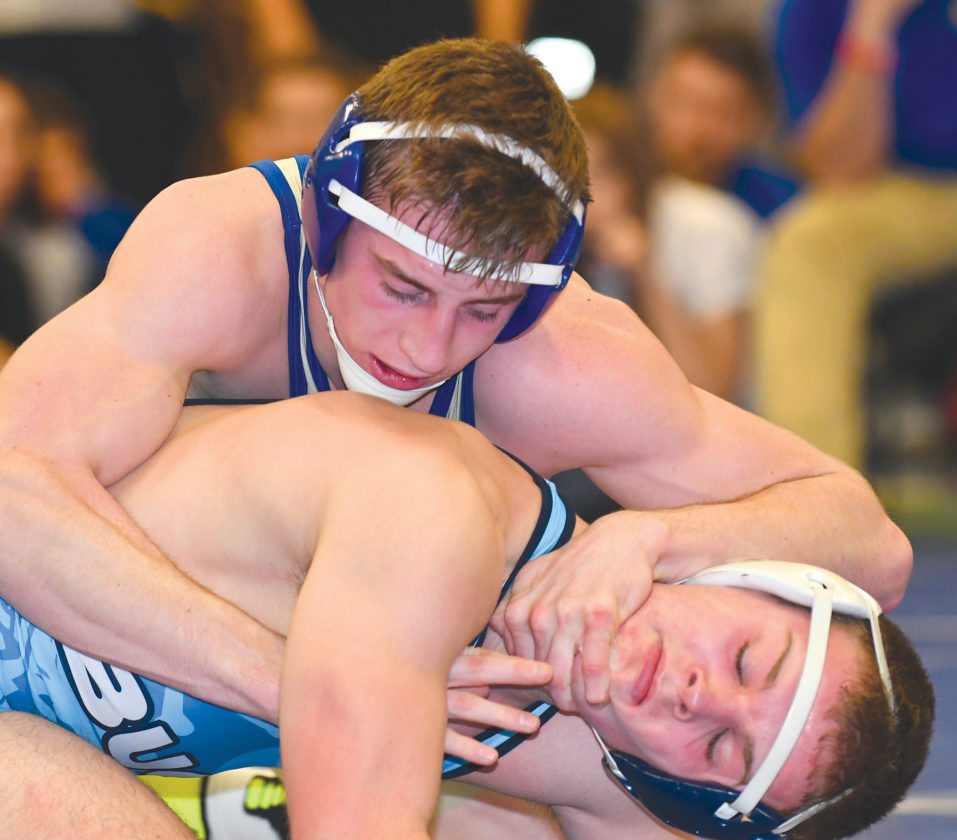 Photo for the Mirror by Tami Knopsnyder Chestnut Ridge senior Justin McCoy is a defending PIAA Class 2A wrestling champion.

There have been many opportunities in which Chestnut Ridge’s Justin McCoy could brag about himself.

He could brag about winning a Class 2A state title last year and his three state medals.

He could boast about winning three District 5 titles.

But he’s not that guy. While he’s tempted sometimes to brag, McCoy instead chooses to be humble.

“He’s always been like a shyer-type kid, a very polite kid and well mannered,” Lazor said. “He’s always been taught to be humble through his family upbringing. It’s weird sometimes. I even get teachers coming to me and say ‘I just had him in class. He’s one of the most humble and nicest kids you’ll meet.’ It’s a surprise since he’s such a star athlete.”

McCoy, who was a key part of the football team, is 34-1 this season, and he leads the area in pins with 22 wrestling at 152 pounds. He also has three technical falls and five major decisions.

“I think I’ve been doing pretty well,” McCoy said. “I think I keep growing every match and getting better. My goal is to keep moving all the time, give my best effort and be aggressive every match. I want to keep doing that.

“Last year, there were matches where I didn’t open up to the best of my ability, I think. I think every match this year I’ve really opened up, and I was aggressive every match, trying to score points at the end of the match.”

While his opponents haven’t had much success against him, their intentions are to make a name for themselves against McCoy, who placed sixth as a freshman at Hershey and seventh as a sophomore. He’s ranked No. 1 at 152 by PA Power Wrestling.

“He’s going to get everyone’s best match,” Lazor said. “They know who he is, and people like to knock off a state champ. But he likes the challenge, likes to battle, so he just enjoys the opportunity to go out and perform.”

His only loss this season came to three-time West Virginia state champion Josh Humphreys, 8-2, in the Powerade finals.

“He’s a really good, strong kid,” McCoy said. “I made a couple mistakes during that match, but I feel like that match really, really helped me. I learned a lot from it, especially with legs. I need to work on getting out of legs. In neutral, I tried to hook his leg and roll with it, but I didn’t have his leg hooked and got in a bad position.

“It was really disappointing because I was hoping for an undefeated season. But I realized a couple days afterward that it’s not the only loss of my career.”

“As we watched the match (on film), there were a couple mistakes here and there where he presented his ankle,” Lazor said. “It showed him a mistake that he was doing so he could get it corrected.”

McCoy will be a heavy favorite to win his fourth District 5 title on Saturday at UPJ. If he wins, he’ll become only the third Ridge wrestler to win four, joining Tyler Dibert (2010-13) and Lester McClucas (1958-61).

“That’s going to be pretty cool,” McCoy said. “It is something that I’ve wanted, but it’s not something that I really looked forward to. It might happen, so I’m pretty excited about that. It would be cool to go to the district tournament later in life and see my name in the book.”

Of course nothing can match winning a state title. He captured the program’s second state title with a 5-2 victory over Bishop McDevitt’s John Pipa in the 145-pound finals as a junior.

“That was one of the best moments of my life,” McCoy said. “It was what I really worked for my whole life. Since I was a little kid, I would go with my dad to watch it at states, and I’d just dream about winning. Then I did it, and it was really exciting. Hopefully I can keep it up and go for my second one this year.

“It was really tough last year. There were a lot of studs in the bracket. Of course, there was a now three-time state runner-up, John Pipa, in the finals. People were telling me I didn’t have a very good draw, and I just ignored everyone because if I wrestled my best I knew that I had the chance to win.”

“It was one of the happy moments of my coaching career,” Lazor said, “seeing a young man who has put the work in that he has win it. And he still stayed a humble young man. It was great to see someone as deserving as him win a title.”

The Lions, of course, have two state champion candidates in McCoy and 160-pounder Jared McGill (35-0). They’re practice partners, and sometimes those workouts get wild.

“It’s like two alley cats going at each other,” Lazor said. “We usually end up clearing about half the wrestling room with scrambles and flipping around. It’s fun to watch at times when they get going.”

McCoy didn’t rest on his laurels in the offseason. He finished fifth at 145 at Flo Nationals, third at the NHSCA Junior Nationals and 10-1 for Young Guns Black at the Disney Duals. McCoy also committed to wrestle for Virginia, and he signed recently.

Despite his state medals, McCoy didn’t win a Southwest Regional title until last season, eking out a 3-2 decision over Freedom’s Kody Komara.

“I was able to win regionals last year for the first time, and that was really nice,” McCoy said. “There aren’t too many regional champions from Chestnut Ridge. I’m hoping to do that again.”

No Chestnut Ridge wrestler has ever won two state titles, so McCoy will look to make history in March.

“I just want to wrestle for God,” McCoy said, “and do my best every match.”