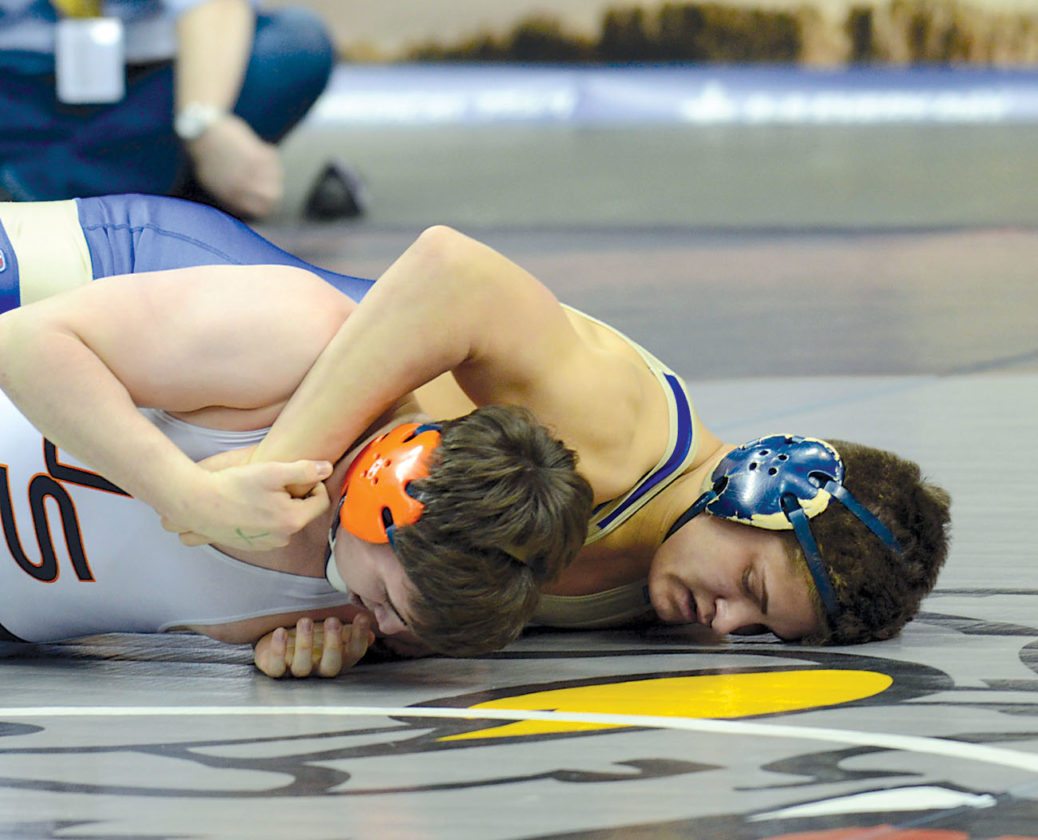 Photo for the Mirror by Tami Knopsnyder Ridge’s Jared McGill won his weight class at the Thomas Chevrolet Tournament in Bedford.

Chestnut Ridge’s Jared McGill is an impressive 27-0, and he is the only undefeated starting wrestler left in the Mirror coverage area.

Even his teammate and returning state champion Justin McCoy has a loss this season.

The junior has placed twice at the PIAA Championships, taking fourth at 170 last season and sixth as a freshman 132-pounder. So, it shouldn’t come as a complete shock that he’s undefeated.

“I’m not surprised because I put in a lot of work over the summer,” McGill said after winning his second Thomas Chevrolet title on Saturday with three pins an an injury default win over Athens’ Nate Bradley in the finals. “I did a lot of tournaments in the spring.”

McGill, who took third at 170 at the NHSCA Sophomore Nationals in the spring and 10-1 at the Disney Duals, has amassed a perfect record despite Ridge’s rugged schedule that includes Powerade and the Ultimate Duals.

“We say ‘We’ll do everything we can to get you a loss before the state tournament,'” Ridge coach Greg Lazor said with a smile. “That’s kind of what we do schedule-wise. But he’s trying to prove us wrong and keep it going. Kudos to him, and I hope he proves us wrong.”

“I don’t know. Maybe he’ll try to find me one at the state duals,” McGill said with a laugh.

Maybe so, but his opponent is going to have an uphill battle against McGill, who has 15 pins, four technical falls and a major decision among his 27 wins. He just reached the 100-win plateau on Friday at the Thomas Chevrolet Tournament. McGill has a career record of 103-15.

“McGill is doing great,” Lazor said. “He’s working hard. He’s getting some more offense, which is something we’ve really worked on at the varsity level. It was something he was missing coming up through. He’s getting a lot more takedowns than he has. When he gets a takedown and gets an extra go on top, that makes him all the more dangerous.”

McGill became the first Chestnut Ridge wrestler to win a Powerade title when he beat Waynesburg’s Kyle Homet, 4-3, in the finals.

“Any time you win a Powerade Tournament title, that’s something special,” Lazor said. “He got a lot of recognition for it. A lot of colleges called all of a sudden just because of that title.”

McGill, though, says he’s still committed to wrestle for Army, though. He committed early to Army in September.

While he wrestled in the postseason last year at 170 and all of this season at 170, McGill is dropping to 160 in an effort to win a gold medal at states.

“One-seventy is pretty loaded,” McGill said. “You’ve got Ruth, Patrick, (Southern Columbia’s Gaige) Garcia, Group and the kid from Athens, Bradley, so there are a lot of studs at that weight. 160 is not as tough. Coach and I talked about it, so I started my descent to 160. You have to do what you have to do win a state title, and I’m going to do anything I can this year to win.”

“He was kind of a small 170 last year, and he’s kind of naturally during this season 168, 166,” Lazor said. “He looked at 160, and he’s wrestled some of those boys and had success with them. He wants to go for a title, and he felt that was his best chance for it. He made the dedicated decision to go for it, and he’s doing well.”

McGill was a two-time Pennsylvania Junior Wrestling champion, so expectations were high for him when he came up as a freshman. He didn’t disappoint, going 33-8, winning a District 5 title and placing third at the Southwest Regional before earning his first state medal.

“We knew we had a special kid there,” Lazor said. “We knew he was capable of doing a lot of good things with a lot of hard work, and he’s obviously shown that to us in his three-year career. You see it so many times a kid had great ability (at the lower levels), but it doesn’t show on the varsity level. It’s so nice to see that hasn’t been the case with him.”

McGill sent shockwaves across the state in December of his freshmen season when he beat Bedford’s returning state champ Jonathan Gabriel, 10-8, in the dual meet.

“I really never thought about it how big it was to beat a returning state champ as a freshman until this year,” McGill said. “That’s huge. It was a pretty big match.”

McGill then jumped from 132 as a freshman to 170 as a sophomore. Despite that jump, he was able to go 43-7, win his second district title, finish second to Huntingdon’s eventual two-time state champ Jacob Oliver at regionals and earn his second medal at states.

“It was different because people are bigger and stronger, and you’re wrestling older kids,” McGill said. “Being down at 132, there’s a lot of shooting, but at 170, people run out of gas faster. So, my gas tank helped me. I was more worried about winning and losing than scoring points. I want to keep scoring points. If I score a lot of points, nobody is going to beat me.”

McGill certainly battled Oliver, dropping a 5-3 decision and attempting what was called a “flying squirrel” in the last 10 seconds in an effort to take the Bearcat down.

“It gave me a lot of confidence being in a close match with him,” McGill said. “It was 4-3, and I let him with 20 seconds left to try to take him down.”

At the state tournament, both of his losses came to Reynolds’ Joel Leise, 8-5, in the quarterfinals and 5-3 in the third-place bout.

“I’m pumped just to redeem myself last year after getting fourth,” McGill said. “I lost to the same kid twice. That was frustrating because I felt I was better than the kid, but I just couldn’t get by him. I always seem to lose to Reynolds guys.”

McGill and McCoy were instrumental in helping the Lions go 10-2 in football, with McCoy catching 38 passes and McGill grabbing 29 as wingbacks.

But when McGill’s attention turned toward the mat, he excelled.

This year, if he keeps winning, McGill will have that favorite’s target on his back. When you come into the PIAA Championships with a perfect record, others want to put that first blemish on your record.

“I think his chances are as good as anyone down there, but you never know,” Lazor said. “In the state tournament, whoever’s wrestling the best that week, and a little luck here and there doesn’t hurt. If he keeps wrestling the way he is and makes a few improvements here and there, I think he has a good shot at getting things done.”