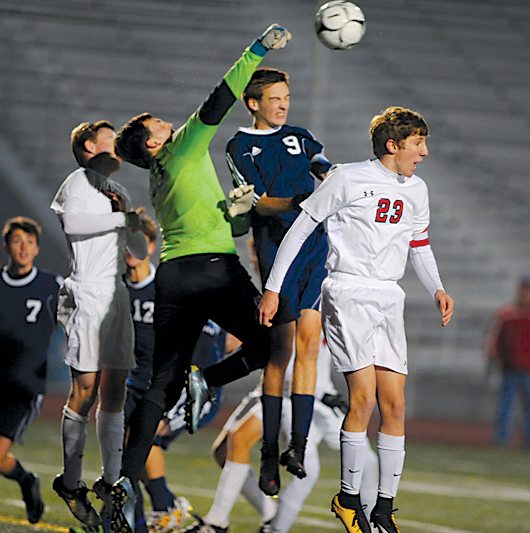 Hollidaysburg started the District 6 3A championship game on fire, scoring twice in the first 7:46.

Top-seeded Bellefonte did not go away, however. The Red Raiders battled back to tie the game 2-2, prompting a stern halftime talk from coach Craig Shale.

“You can’t take things for granted. We started great. Two goals up. We were controlling the game. We let them back in,” Shale said. “To be fair, they outplayed us that last 10-15 minutes of the first half. They had all the momentum going into halftime. I chewed my guys out a little bit.”

Still tied 2-2 midway through the second half, the game turned on a miscue. Bellefonte keeper Josh Gaus stepped over the goal area line as he punted the ball, giving Hollidaysburg a free kick from the edge of the goal area.

Connor Pielmeier buried the 18-yard kick, and Hollidaysburg added two more for a 5-2 win Wednesday at Mansion Park. It’s the second straight 3A championship for the Golden Tigers.

“I took one earlier in the game. The goalie made a really nice save on it so I tried going back the other way. Luckily, I picked the right way, and the ball found its way under him some way,” Pielmeier said. “Two years in a row. Going out senior year with a win, it’s unreal. It’s a great feeling.”

Pielmeier’s overall play, which included a pair of goals and an assist, earned high praise from his coach.

“Connor Pielmeier was superb (Wednesday),” Shale said. “He controlled things in the midfield. It was an inspired performance. That’s the best I’ve seen him play. Basically, he took this team on his back. I told them ‘Everyone else has to step up because you can’t just let Connor do it.’ And they did.”

“When you give them the ball right outside the 18, that’s tough to stop. They’re dangerous on anything like that and the corner kicks. Right there’s where it turned,” Martz said. “In the first half, we were down 2-0 and the guys battled back. Until that kick, we had some good plays, some good looks on goal, some good shots. As soon as they hit that one, that was it.”

Hollidaysburg got another goal 3:30 later when Jacob Hollingshead’s shot deflected off Gaus, and Lucas Scordo was there to put in the rebound.

The Golden Tigers sealed the win on Dominic Daily’s second goal of the game with 10:37 remaining.

“We worked our way up field. I got a good touch past the defender. It threw him off a little bit, and I somehow got it past the goalie,” Daily said. “It’s great to win again this year, go back-to-back. There’s really no greater feeling. I’m happy to be able to do it with my boys. We’ve grown up together and have a lot of great memories. I couldn’t imagine it any other way.”

Hollidaysburg grabbed an early 2-0 lead on goals from Pielmeier and Daily.

Pielmeier opened the scoring with a goal off a penalty kick 5:59 into the game.

“I looked at the goal once and the goalie was trying to mess with me. I turned around and new what side was going to. Stepped up to the ball and hit it. Got lucky the goalie dove the other way,” the senior forward said.

Less then two minutes later, Daily scored, burying a rebound of a Pielmeier shot in the back of the net.

Bellefonte answered with an unassisted goal by Daniel Catchmark with 28:37 left in the first half, and Evan Nyquist scored on a penalty late in the half to the tie the game.

Hollidaysburg plays the District 7 champion Tuesday at a site and time to be determined. West Allegheny and Montour play for the District 7 title Saturday.