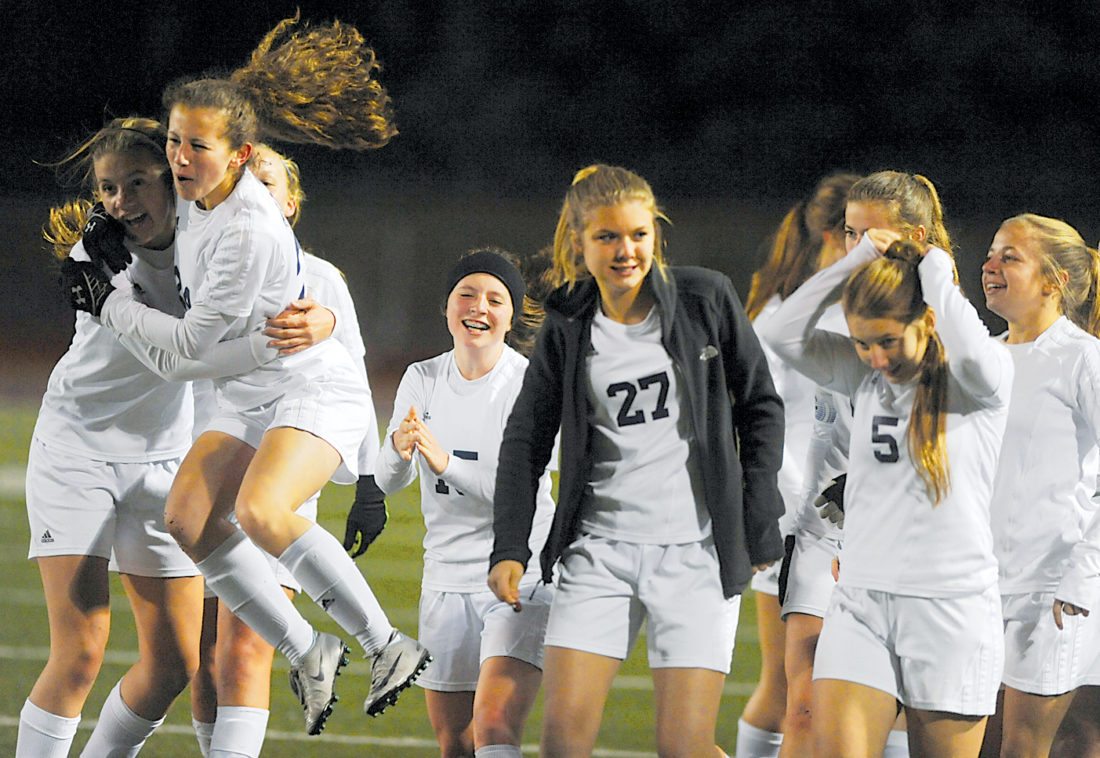 When it comes to district championships, winning one is great, but winning two is even greater.

That was the collective chant of the Hollidaysburg Area High School girls soccer team Wednesday night, after the Lady Tigers defended their District 6 Class 3A title with a hard-fought 1-0 victory over Somerset under damp, chilly conditions at Mansion Park.

“It’s good,” Hollidaysburg coach Dave Soellner said of his team’s ability to win its second district gold medal in a row. “This is my 12th year coaching at Hollidaysburg, and we haven’t had a girls team go back-to-back (on winning championships). These girls have worked really hard to continue to build this program.”

Hollidaysburg (15-4-1) scored the only goal of the game with just seven seconds remaining in the first half.

Routch found herself free with the ball while rushing down the right side of the field, before connecting with Hurd on a crossing pass toward the middle of the field.

Vought had come out of the cage to try cut down on Routch’s angle, but left the charging, sliding Hurd with more than half an open cage in which to kick the ball.

“The pass could not have been more perfect on Sydney’s part,” Hurd said of Routch’s assist. “The goalie came out to guard Sydney, and I just got the ball on the slide and kicked it in.”

Routch said the goal came about as the result of a designed type of play.

“We’ve talked all year about getting the ball to the outside (of the field), which is how we scored our goal,” Routch said. “Their goalie was coming at me, and I passed it to McKenna and she put it in the back of the net.”

Routch and Hurd were both ecstatic about the Lady Tigers’ title defense.

“It’s absolutely good to defend the title, win it again, so that our underclassmen can have the chance to keep the streak going next year,” Routch said.

Hurd said that defending the championship was a huge thrill for her and her teammates.

“It’s indescribable,” Hurd said. “It’s the greatest feeling ever. The fact that it was such a close game makes it a little more sweet. It feels like all the hard work that everybody on the team has put forth all season has paid off.”

On a night when much of the play was in the middle of the field and quality shots on goal weren’t easy to come by for either team, one goal made all the difference.

Hollidaysburg outshot Somerset, 8-6 for the game, and generally controlled the first half, with Vought making a nice sliding save on a breakaway try by Routch 10 minutes into the game.

Somerset enjoyed a general territorial edge in the second half, with Hollidaysburg sophomore goal keeper Meghan Cutshall making a fine save about 26 minutes into the half.

“In the second half, I thought we controlled more of the pace,” said Somerset coach Alejandro Bastidas, whose team finished the season with a 14-6 record. “Hollidaysburg is a good team that played hard the entire time, and our girls fought hard all the way to the end.

“We moved the ball well on the ground in the second half,” Bastidas said. “Unfortunately, when you’re down a goal, you tend to get a little hasty and try for the home run. But I’m super proud of our effort, and honored to be able to coach these players.”

Hollidaysburg now moves on to the PIAA state tournament and a game next Tuesday against the WPIAL champion at a time and site to be determined.

On Wednesday, though, the Hollidaysburg team was able to take time to savor its well-deserved moment of glory.

“It feels surreal that we could do it twice in a row,” Routch said.

“I don’t think it could get any better than this,” she said.

Second half: No scoring.

CLAYSBURG — If anyone had left the Inter-County Conference girls championship game at halftime, they might have ...

BELLEFONTE — Gracie Weaver finished first in all events and won the all-around for Altoona, which won the Central ...