Diamond in the rough: Curve could face a season without baseball 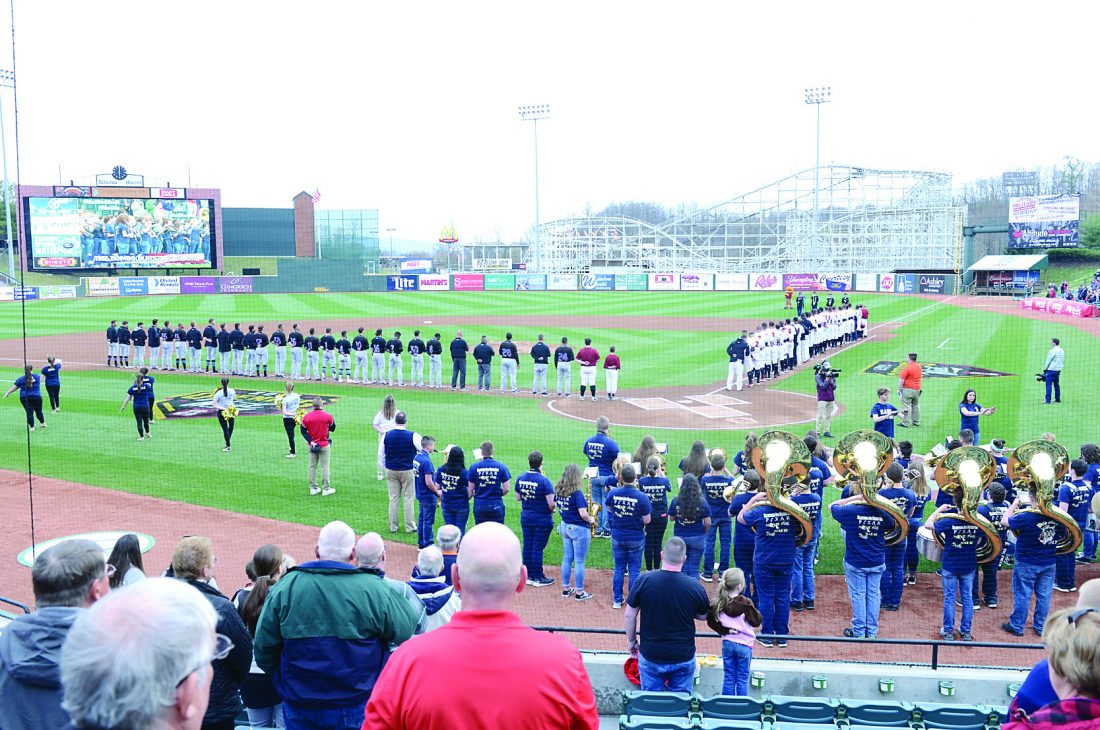 Mirror file photo The national anthem is played during opening-day ceremonies for the Altoona Curve in 2019 at PNG Field.

The Curve were supposed to open their season in four days, but that won’t be happening with the nationwide sports shutdown because of the coronavirus.

Now, it appears the entire Curve season could be in jeopardy, based on comments Saturday by President Donald Trump.

Speaking to commissioners of the major sports leagues on a conference call, Trump said he hopes to have fans return to sporting events by August or September, according to ESPN.

The Curve’s season, as currently constructed, is scheduled to end Sept. 7. So if it’s August before fans can return to sporting events, it would be a strong possibility that there would not be a minor league baseball season at all.

Trump’s comments were just him speculating, and he’s been wrong about time frames before concerning the virus. The president also said he believes the NFL season, slated to begin Sept. 10, should be able to start on time.

Theoretically, professional sports teams could play games without fans in the stands. As long as Major League Baseball, NBA, NHL or NFL games are televised, those leagues and teams could still make a lot of money through broadcasting rights.

That’s not the case in minor league baseball, where teams rely on attracting fans to make money.

Curve owner Bob Lozinak said Saturday that he’s hopeful the season could start by June 1. That time frame has been discussed publicly by baseball officials in recent weeks.

“That way we could have half our season, the better part of our season for minor league baseball,” Lozinak said by phone from his home in Maryland. “We would be pretty good with June, July and August.”

The national optimism that baseball could return by late May or early June came before Trump’s coronavirus task force revealed this past week that between 100,000 and 240,000 Americans could die from the disease.

In recent days, there has been a lot of discussion around the nation about whether the college football and NFL seasons can begin on time in early September. That’s more than three months later than the time frame baseball has been hoping to begin its season.

Trump’s comments Saturday put a whole new time frame on everything for the sports world.

Medical experts ultimately will play a big role in determining when it’s safe for large crowds to gather at sporting events. Renowned Dr. Anthony Fauci, who’s on Trump’s task force, has explained the dangers of returning to large social gatherings too soon.

Fauci has said on national interviews that once the curve of the virus starts to drop in the entire country, then decisions can start to be made about society returning to normal.

The concern, Fauci has said, is that returning too soon could lead to a second wave of people getting sick and setting back the progress that has been made.

One issue is that there are different opinions within the medical community about when society can return to normal. After Trump’s comments about sports fans returning in August or September made news Saturday, Dr. Dena Grayson, an infectious disease expert, tweeted, “People will die if this happens.”

Even if Major League Baseball is able to start an abbreviated season in August, as Trump’s comments suggest, it doesn’t mean the minor leagues would start up and play for just one month.

“The only salvation for that would be if we would play 15 home games in August,” the Curve owner added. “You’ve got to get some cash flow in to pay some of the bills to get us through the winter.”

If MLB games were to start in August, instead of minor leaguers reporting to cities across the country to play, the sport could deem it more feasible to keep prospects at spring training complexes in Florida and Arizona to work out and play games.

Lozinak pointed out that a minor league franchise incurs a lot of expenses early in the calendar year, before seasons get under way, as team personnel are busy planning for the upcoming season. Those expenses are then made up by the money that comes in during the season, and that money also has to get a franchise through the remainder of the calendar year after baseball ends.

“There are so many hard costs that are not moveable,” the team owner said.

Lozinak was asked if the Curve could survive missing an entire season.

And what about other minor league teams around the country?

“They would do everything in their power for a couple years to get them over the hump,” he said. “It would be very painful for all of them.”

Even after being told of Trump’s comments about sports returning in August or September, Lozinak remained optimistic that baseball can return sooner and the Curve can have a season.

“He just may have said that as a safety cushion for himself,” Lozinak said of Trump’s time frame.