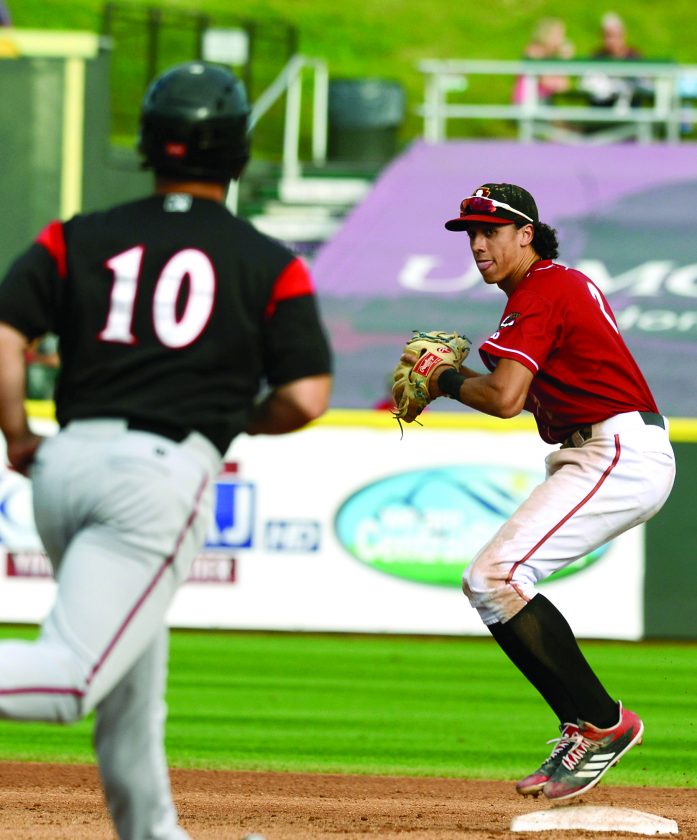 As Curve fans saw during his time with the team in 2017 and ’18, and as Pirates fans saw from the MLB rookie last year, Tucker is a good talker who enjoys chatting about anything and everything — with just about anyone.

From going up to a member of a visiting high school marching band and jamming on the drums, to chatting with a fan on the field who had just caught his game-winning grand slam, the shortstop showed during his time in Altoona to be as relatable of a professional athlete as you’ll find.

It’s no surprise, then, that Tucker was able to discuss the coronavirus situation in real terms and explain how difficult it is, not just as a baseball player, but more importantly as an American citizen who’s fearful of how bad all of this could get.

“It is scary,” Tucker said by phone Monday from his home in Arizona. “I’ve never lived through something in my life where it seems like the world is kind of stopped.

“I’m at home on the couch with my dogs and my little brother, who can’t go to school right now. … My grandma is 80 years old, and she isn’t leaving the house right now, which I’m super happy about.”

Tucker, 23, said he’s paying very close attention to all of the coronavirus coverage. And not just because he wants to know when he can play baseball again.

“It affects us all, and we don’t know a ton about it,” he said. “For some people it’s life and death, so it’s very important to be educated on it.”

Tucker mentioned he’s followed how President Donald Trump and Vice President Mike Pence have gone about discussing the potential impact of the coronavirus. He said they went from “everything’s going to be fine” to finally starting to deliver a more pressing message Monday.

“It’s kind of funny and ironic (Trump) came out and said (Monday) we’re not ahead of the coronavirus … and we’re just hearing about it from a different lens,” Tucker said.

The Pirates’ season was scheduled to begin in eight days, before the coronavirus forced Major League Baseball to shut down spring training and delayed the start of the season.

At this point, there’s no telling when baseball will resume, but most estimates peg it for late May or early June.

“It’s unknown,” Tucker said. “I just got off the phone with my agent, who has been constantly on the phone with the Pirates and Major League Baseball. We’re just trying to get answers and information.”

One thing everyone wants answers on is how everything will shake out financially.

Major League Baseball will pay players $1,100 a week until April 9, then it will be up to teams to pay the players. While $1,100 a week is more than many will be making in this country, it’s a paltry sum compared to the amount major leaguers are accustomed to receiving.

“I’m really lucky because I’ve done pretty well financially,” Tucker said. “But for a lot of people, this is crazy. They have kids to feed and mortgages to pay.

“We don’t know if we’re getting paid. We stopped getting our spring training per diem, and people really count on that. … I’m lucky that I’m only 23 and don’t have a wife or kids and not much responsibility. It is crazy because not all my teammates and friends are in that same boat.”

Minor leaguer players certainly are not in the same boat. They are not even paid for spring training, so many players who don’t have much money — particularly foreign players — remain in Florida or Arizona with little or no means to return home and no money coming any time soon.

Infielder Stephen Alemais, who likely will be back with the Curve this year after missing last season with an injury, posted this Tuesday on Twitter:

“Super proud of all 30 MLB teams donating 1 million dollars each to help employees..but how about us minor league MiLB guys who are also your employees who make no money and can’t get any jobs at the moment. Also some guys can’t return home to their countries.”

Tucker said he is in frequent communication with his friends around baseball, and he has many on numerous teams. They’ve even set up group chats to discuss everything that’s going on with baseball and the coronavirus.

Tucker contemplated remaining in Florida, where the Pirates hold spring training, or returning home to Arizona once everything was shut down. He opted to go back home and said he’s fortunate because, with the Arizona weather and facilities, he can continue to work out every day.

Players who live in other parts of the country, he noted, may not have as many options to stay in shape during this down time.

“I don’t know if I’m going to be here for two weeks or three months,” Tucker said. “We don’t know if we’re playing in May or June or July, but it is critical for us to be ready and stay ready.”

Asked for his best guess on when baseball will resume, Tucker was candid and pragmatic.

“Being realistic and having some information, I don’t think we’ll be playing in April or May,” he said.

One reason is that, whenever things do start to get back to normal in the country and people are allowed to gather once again — which could be another eight weeks — Tucker said it will still take several more weeks for baseball players to go through another round of spring training.

“I think that would take 3-4 weeks to have ample time in spring,” he said, “so I’m kind of prepping in my mind for June and July. Which is awful because I want to play.”

In the meantime, Tucker is like most everyone else in the country. He’s stuck inside with lots of time on his hands and will be trying to do whatever he can to pass the time.

“At the end of the day, baseball players want to play and want to work, but we just want to do the same stuff everyone else does,” he said.

For Tucker, that includes watching lots of movies, hanging out with family and friends, and laying out by the pool.

Oh, and also his drums.

“My little brother hates it when I play drums at the house because it’s so loud, but he’ll have to deal with it,” Tucker said.