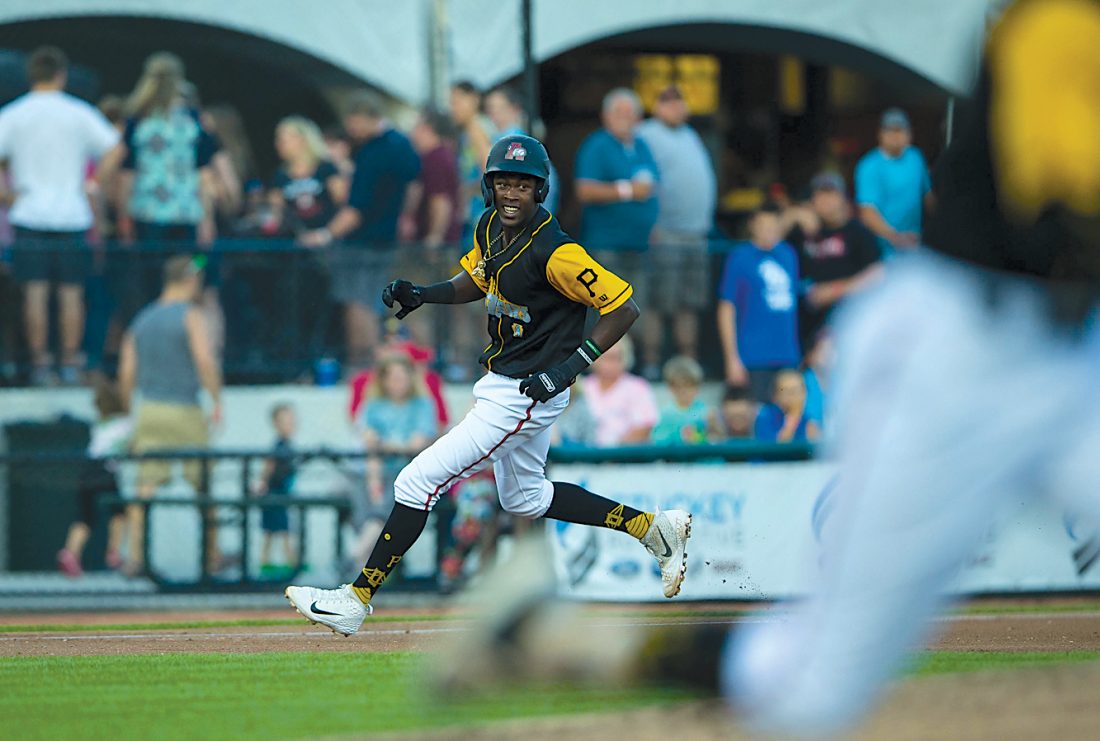 Photo for the Mirror by Rob Lynn Oneil Cruz is the latest Pirates prospect to play shortstop for the Curve, following Kevin Newman and Cole Tucker.

Over the past few seasons, Curve fans have become accustomed to seeing a top Pirates prospect jog out to shortstop for the top of the first inning.

Kevin Newman, who’s impressed as the everyday shortstop for the Pirates this year, and Cole Tucker, who made his MLB debut in April, have all come through Altoona in the last two years. They’re both solid defenders that hit more for average than for power.

This week, Curve fans were introduced to the new top infield prospect in the organization, but he’s nothing like Newman and Tucker. Oneil Cruz, the No. 3 prospect in the Pirates organization, stands at 6-foot-6 and throughout his brief minor league career, he’s been known for his power — both with his arm and his bat.

“The power is there for Oneil — I mean, he can hit the baseball a long way,” Curve manager Michael Ryan said. “He’s long and lanky. I thought (Tucker) was long at shortstop, but you can double that with Oneil. He looks like he’s not moving, but actually is because he can just cover such ground. They’re all special players and they’re unique in their own ways. We’ll see how they battle out.”

But there can only be one guy at shortstop for the Pirates each night and the club has already got good looks at both Newman and Tucker at the big league level — and they both look like they can be everyday players. Just based on his frame and his tools, Cruz could be in line for a move to a corner outfield position. There are very few shortstops in the MLB that stand at 6-foot-3 or taller — 6-foot-4 Padres phenom Ferando Tatis Jr. is one of the only tall, lanky shortstops excelling right now.

Another thing that points to a potential move to the outfield are the comparisons to Pirates right fielder Gregory Polanco — people from Cruz’s hometown refer to him as a “young Polanco.”

For now, however, Ryan thinks Cruz has a future at shortstop.

“I think if he stays engaged in each game for three hours, he’ll be fine at shortstop,” Ryan said. “That’s where his future is — until the organization makes that decision to change him — and I think he’s going to do very good there.”

But at the plate, even Ryan can’t ignore how much Cruz reminds people of Polanco.

“The stance, the way the bat comes through the zone, the power,” Ryan said. “I see it.”

Cruz is also on a similar path to the big leagues as Polanco, and he might even get to Pittsburgh a bit faster. Cruz is just 20 years old in Double-A playing in a league that has an average age of 24. Only two players in Curve history have played in Altoona at a younger age than Cruz. Even Polanco didn’t make his Double-A debut until his age 21 season.

But through his first week and a half in Double-A, it’s clear that this new level is going to be an adjustment for Cruz and he knows that.

“I’m just trying to adjust to this level because down in High-A it’s not the same,” Cruz said through a translator. “It’s different, a little bit, because here the pitchers know how to pitch better. I know I’ve got to make a good adjustment and everyday try to do something to get better.”

“The skills, you can just tell they’re there,” Ryan added. “The game is just a little fast for him right now, coming from A-ball the speed of the game is different. I think he’s just trying to do a little too much. It’s impressive that he’s 20 years old and hanging in there.”

Cruz went 0-for-3 with a pair of strikeouts in Saturday night’s game and is now hitting .214 to begin his Curve career. He also made his fourth error in just 13 games. But his partner in the middle of the infield — Mitchell Tolman — isn’t concerned.

“I don’t think that’s him not being able to make those plays in general. I think it happens to guys late in the year when our bodies are getting tired,” Tolman said. “He definitely has a couple things to fine tune.”

But Cruz is still just 20 years old, speaks very little English and is probably a little homesick, so it’s easy to see why he might be struggling with the transition.

“It’s definitely difficult, but he’s got plenty of time,” Tolman said. “It’s not like he’s running out of time here where he has to produce. It’s tough from a day-to-day standpoint where things can start to wear on you. I’m not worried as a whole about him.”

Cruz’s mindset and work ethic should have people the opposite of worried as well. Even in a brief five minute conversation, Cruz consistently mentioned his need to put the work everyday if he wants to reach his goal, which is ultimately to be a major league shortstop.

If you ask those who play alongside him, there’s not a doubt in their minds that Cruz will get there one day.

“(He’s) got every tool to play the game,” Tolman said. “He’ll play in the big leagues one day. I can almost promise you that.”