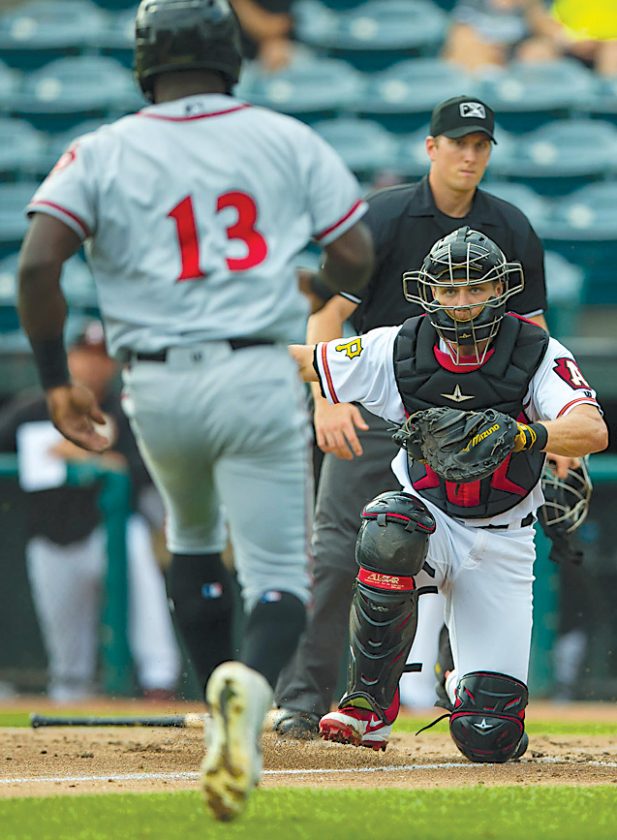 Excitement filled Peoples Natural Gas Field late Wednesday as the Curve were trying to rally in the final inning for the second time on the night, but all that positive energy disappeared in a hurry after a bizarre injury to one of the club’s best players.

Infielder Robbie Glendinning suffered what appeared to be a pretty serious right ankle injury in the seventh inning of a doubleheader against Richmond. Glendinning had to be helped off the field and didn’t put any weight on his right leg.

“We’re going to go get an X-ray right now,” manager Michael Ryan said after the game. “It doesn’t look pretty. … He went to run to first and just rolled it real bad.”

The Curve took the first game, 4-3, scoring a run in the ninth to tie and winning in the 10th. Altoona lost the second game, 1-0, failing to get a runner in from third after a leadoff triple in the seventh and final inning.

Jared Oliva tripled to open the seventh inning of the second game. In the opener, he doubled in the ninth and scored the tying run on a single by Oneil Cruz.

There was a chance for the same situation to play out again in the second game as Cruz came up with Oliva on third. But this time Cruz flew out to left.

That brought up Glendinning, but he also failed to get the run home as he struck out swinging.

Glendinning wound up rolling his ankle on the play, went down in pain and needed a couple of minutes before he could be helped off the field.

“Never a good thing right there,” said Oliva, who watched the play from third base. “Robbie’s been a pivotal piece in our lineup, middle infield and playing third base and in the lineup with big hits. I don’t know any of the details, but hopefully he’s all right and can come back soon because we’re going to need him down the stretch.”

Glendinning got off to a great start with the Curve after coming up from high-A Bradenton, hitting over .400 with runners in scoring position for a while. He’s cooled off of late and is hitting .261 with five homers, 31 RBIs and a .737 OPS in 58 games.

“It’s just tough luck,” Ryan said of the injury. “He was having a good at-bat. He was battling and tried to make a team play and struck out and tried to get down to first, playing the game hard. It’s just unfortunate.”

That was a similar situation to the first game, when Suiter came up in the 10th inning after the Flying Squirrels intentionally walked Arden Pabst. In that spot, Suiter delivered a walk-off single that scored Madris for a 4-3 victory.

Sam Wolff (1-0) got the win for Richmond in the second game, and Sean Brady (3-11) took another tough-luck loss. Brady allowed just one unearned run and two hits over six innings. Tyler Cyr got his second save for the visitors.

Joel Cesar (3-4) won for the Curve, while Raffi Vizcaino (0-4) took the loss in the opener, which was the completion of Tuesday’s suspended game.

The Curve won the first game with a comeback and showed good fight with another last-inning rally attempt in the nightcap. Still, they had the tying run at third with no outs and couldn’t get him in, so Ryan wasn’t happy just with the team just because it showed some fight.

“You love the fight,” Ryan said. “But you’ve got to execute. You can have all the fight you want, but if you don’t execute. … There’s no give up, but at times you’d rather take the execution over the fight.”

LEADING OFF: OF Jared Oliva entered the DH Wednesday batting .354 since June 3, which was 37 points higher than other player in the league during that span. Oliva worked with hitting coach Jon Nunnally on some different things June 1, and everything has paid off in a big way.

SAFE AT FIRST: “The quality at-bats started to come more often,” Oliva said. “When before, I was hoping to get one or two a game, it became, no, I’m in control of this, I expect to have three quality at-bats a game. With quality at-bats, hard contact and hits will come. … Over the course of a long run, a couple months, it’s kind of cool to look back and see the numbers that I’ve put up, but most importantly it’s giving the team a better chance to win when I’m on base.”

STEALING SECOND: Former Curve and Pirates SS Gift Ngoepe has signed with the Lancaster Barnstormers in the independent Atlantic League. Ngoepe was released by the Pirates last week after struggling with the Curve the second time around.

ROUNDING THIRD: The Curve will play Richmond for the final time this season tonight. The Flying Squirrels are an abysmal 42-71, but they’ve played Altoona tough. The Curve are 12-8 against them.

HEADING HOME: Reading comes to town for the first time this season Friday for a three-game series.