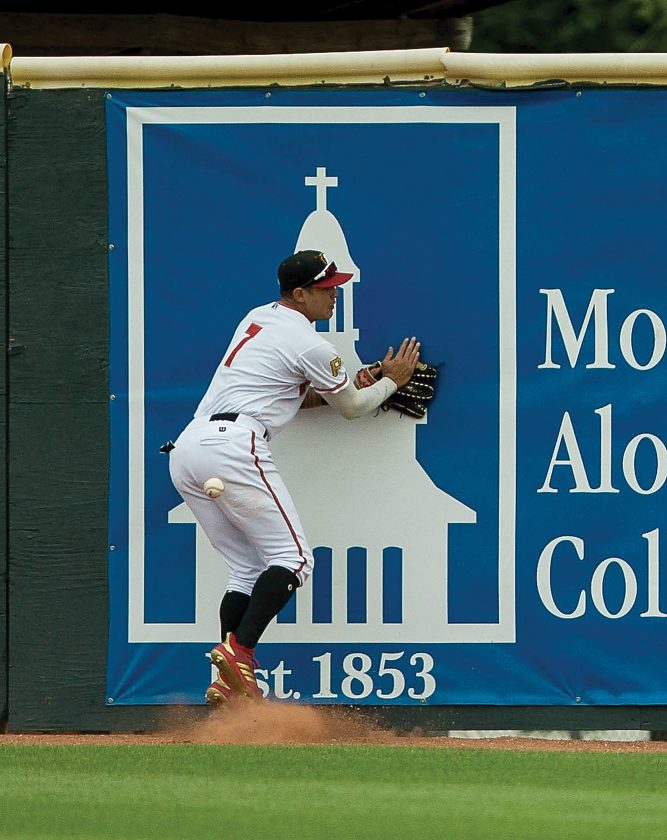 Bligh Madris can't get to a fly ball. Rob Lynn for the Altoona Mirror

Logan Hill had just found the hole between the shortstop and third base for his fourth hit of the night.

The ball was hit so sharply that the runner on second, Chris Sharpe, was held up at third base.

But trailing by a score of 4-2 in the bottom of the eighth inning, the Curve found themselves in the perfect situation to tie the game or potentially go in front with the bases loaded and nobody out.

Three batters later, however, the inning was over and Altoona’s struggles with runners in scoring position continued. Two strikeouts and a soft lineout to the second baseman were enough to spoil what looked to be a promising inning for a Curve team that registered 13 hits in the ballgame.

“Sharpe gets the base hit to get it going with a hanging breaking ball. Oliva hits the (second base) hole, shoots it the other way, which we’ve been asking these guys to do. Logan Hill, takes his shot, doesn’t get it, cuts the swing down, keeps the line moving,” Ryan said.

“The next three guys go and do their own thing. We talk about you want to buy in to what we’re trying to do here and if you’re being selfish and just trying to get yours, you’re going to stick out. Guys stuck out tonight.”

Facing talented Thunder reliever Daniel Alvarez, Ryan said his team knew that Alvarez was going to work the outside part of the plate and that they needed to focus on hitting the ball to the opposite field in order to score.

The first three batters did just that. But those who followed, diverted from that strategy.

“Zero plan,” Ryan said of those three straight at-bats in the eighth inning. “Madris takes a fastball right down the middle and then continues to chase balls in the dirt. Glendinning, we tell him to look for the fastball and (he) swings at three in the dirt. Suiter, not probably watching what’s going on, swings at the first breaking ball in the dirt.”

Altoona got the first two runners on base to start the bottom of the ninth, but yet again weren’t able to cash in as the Curve dropped their second straight game to the Trenton Thunder, a 4-2 defeat in front of 6,147 fans at Peoples Natural Gas Field on Tuesday night.

The Curve went just 1-for-10 with runners in scoring position in the game and left 10 runners on base throughout the game.

Everybody on this team wants to do (drive in runs) so bad,” Hill said. “It hurts whenever you don’t get that hit. I’ve been there, everybody’s been there. You feel like you your teammates down.”

But Trenton, even though it was just 2-for-11 with runners in scoring position on Tuesday night, are the opposite of the Curve.

The Thunder are the best team in the Eastern League with runners in scoring position and two outs, boasting a team batting average of .284 in those situations. And in their 4-2 win over the Curve on Tuesday, all four of their runs came with two outs.

“When you have the ability to get a leadoff walk or a leadoff single and then sac bunt him over and take two cracks (at getting a run) with a guy at second and you pretty much know that you have a good opportunity to get him in, that’s gotta be comforting,” Ryan said. “We can’t even score with the bases loaded and nobody out. It’s the situational at-bats, the two out runs that (Trenton) is way better at than us.”

The Curve will have a chance on Wednesday to regain some momentum heading into their key weekend series in Bowie. They’re now five and a half games out of first place in the second half and their playoff chances take a hit with each demoralizing loss that occurs.

“It’s huge,” Hill said of the series finale. “We just came off two good series against Erie and losing the first two games of this series hurts, but we can’t get swept.”

Key player: Logan Hill registered his second four-hit game of the season, going 4-for-4 in the game.

Key play: Jerrick Suiter’s lineout to Trenton second baseman Gosuke Katoh looked like it might drop into right field for a base hit, but it instead found Katoh’s glove and the Curve came up empty in the eighth inning with the bases loaded and nobody out.

Key stat: Curve reliever Beau Sulser suffered just his first loss of the season, allowing the two go-ahead runs in the top of the eighth inning.

LEADING OFF: Chris Sharpe got things started for the Curve with a first inning home run off promising Trenton starter Albert Abreu, who is currently rated by MLB.com as the No. 3 prospect in the Yankees organization.

SAFE AT FIRST: The Curve’s team approach at the plate was to be aggressive against Abreu and take advantage of fastballs early in the count. Abreu allowed two hits in the first inning, but still just 11 pitches in the inning, setting the tone for the rest of his outing.

STEALING SECOND: “We wanted to be aggressive at the plate,” Ryan said. “We’ve been in a ton of 0-1 counts at the plate [and] you’re not going to do too well when you’re down 0-1 constantly. We wanted to try to hit the first fastball we saw and we did a good job of that early. You get 13 hits, you better score more than two runs.”

ROUNDING THIRD: But while the Curve did register six hits in the first four innings using that aggressive approach, Logan Hill did admit that it may have come back to bite the team in the key situations late in the game.

HEADING HOME: “We came out swinging and we made a lot of early, hard contact,” Hill said. “Maybe some of that aggressiveness backfired on us when the runners got in scoring position, maybe [we] were a little too aggressive early in the count, instead of taking what he was going to give us. Sometimes, that walk keeps the line moving and puts more pressure on [the pitcher] and maybe that’s something that we’re going to focus on going forward.”