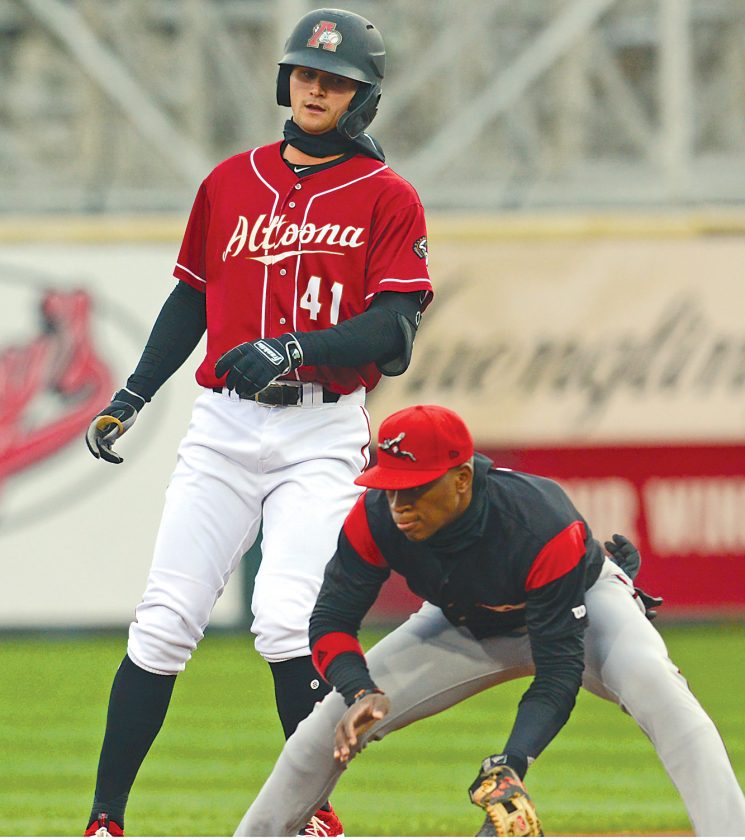 Mirror file photo Jared Oliva is rated as the No. 9 prospect in the Pirates’ organization.

He knows that one game, one at-bat, one pitch won” define his baseball career. It’s probably a reason why one of his favorite quotes is the oft-used, “Baseball is a marathon, not a sprint.”

That quote is often used to describe the long, grueling Major League Baseball season that spans 162 games over the course of six months.

But to Oliva, that quote means much more.

“You always hear (that quote) so much, but it’s not just the course of a season for some guys. It’s their whole career,” Oliva said recently. “It’s not about where you necessarily start, you’ve got to put in a lot of work along the way.”

Oliva was talking about his now former teammate James Marvel, a former 36th-round pick who was recently promoted to Triple-A Indianapolis after an outstanding first half of the season in Altoona.

But Oliva’s words aptly describe his career as well.

Sure, he is rated by MLB.com as the No. 9 prospect in the Pirates’ organization and was a seventh-round selection in 2017. But his path to Altoona has been nothing but a straight line.

Oliva wasn’t drafted out of high school and started his career at Arizona as a walk-on, before eventually becoming a key member of the team that made it all the way to the College World Series finals in 2016.

In a lot of ways, his 2019 season has been a mirror image of his career as a whole. Oliva will be the first to admit he was struggled at the plate over the course of the first two months of the season — his batting average was a season-low .193 on June 2.

The majority of those early-season at-bats came in the leadoff spot. Oliva was a natural leadoff candidate for the Curve as a player with solid plate discipline and good speed — he’s currently second in the Eastern League in stolen bases with 25.

But for some reason, things weren’t clicking for Oliva.

“There’s no doubt I got off to a slow start, and I just wasn’t the same player that I know I was,” Oliva said. “I didn’t feel like I was showing that to everyone on the team.”

Oliva got together with Curve hitting coach Jon Nunnally, and the two worked on a plan of attack. The message from Nunnally was simple — be more aggressive early in the count.

“We worked our butts off,” Oliva said. “Especially in June, working with Nunnally. I really committed to my core values and what I wanted to do in the box, and after a lot of reps and time, we have a good foundation of what we’re doing now each day. We’re keeping it simple.”

Ever since that home game against New Hampshire on the second day of June, in which Oliva went 0-for-4 with a pair of strikeouts, the results have begun to turn.

Since June 2, Oliva has been arguably the best hitter in the Eastern League. Over these last six weeks, he’s leading the league in average (.360), on-base percentage (.452) and OPS (1.020). He’s also raised his season batting average almost 80 points.

“He’s just staying within himself,” Curve manager Michael Ryan said recently. “The work he’s put in is really starting to show. He’s a talented player, and his work ethic is unbelievable. I’m happy to see some results.”

Aside from the work he put in, there may be another factor contributing to Oliva’s recent success — his spot in the lineup.

There’s been a lot of shuffling up and down the Curve lineup over the course of the last month or so. Injuries, players moving up to Triple-A, new players coming in, etc. One of the changes as a result is Oliva’s move to the No. 3 spot in the lineup.

It’s been nothing but a rousing success for both Oliva and the Curve.

“(The coaching staff) wanted to see me make that next step,” Oliva said of the move. “I’m not doing too much differently. I try to be the same player no matter where I am in the lineup. But I’m getting in a lot more RBI situations. I feel like I’ve been contributing to the team more.”

Oliva certainly contributed during his team’s road win over Erie on Saturday night.

He registered a career-high five RBIs as Altoona topped the Seawolves by a final of 10-7. And again on Sunday afternoon, Oliva drove in a pair of runs on a two-run, opposite-field home run, although the Curve lost by a final of 6-5.

That No. 3 spot seems to be suiting him nicely. But even if another lineup shuffle were to happen, Oliva would be OK with it.

“I feel comfortable wherever I’m at as long as I’m having those quality at-bats and moving the line along,” he said.

For now, though, Oliva will continue to be a key piece in the Curve lineup that is going to need to produce at a high level in order to reach the postseason for a fifth straight year.