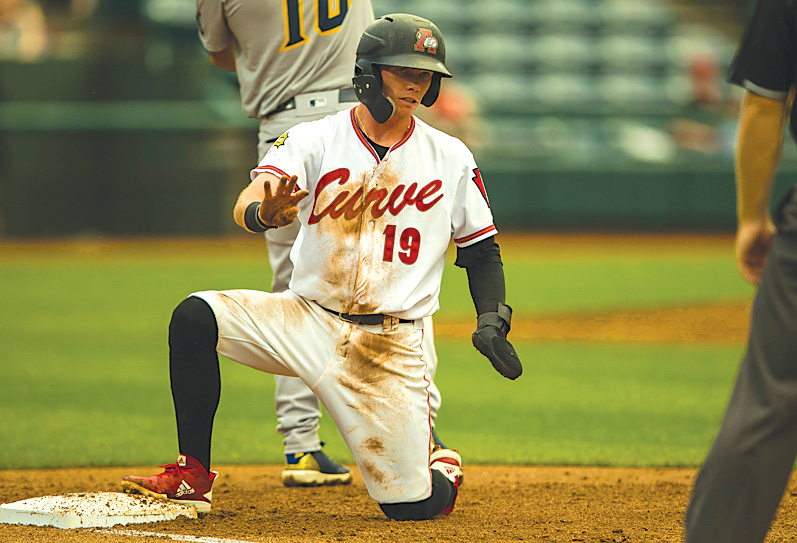 Photo for the Mirror by Rob Lynn The Curve’s Mitchell Tolman is safe on a pickoff attempt.

Challenge answered. And the dramatic result was the Curve’s biggest win of the season so far.

“This was a great win, and I think it will get us back on track,” outfielder Jared Oliva said.

A day after manager Michael Ryan held a team meeting and challenged his club with pointed comments, the Curve came out and rallied with two runs in the eighth inning for a huge 6-5 win over Trenton before 3,319 fans at Peoples Natural Gas Field.

It was a much-needed and perfectly timed win for Altoona, which now heads to Bowie for a key four-game series against the first-place Baysox. The Curve trail Bowie by 4¢ games and need to start making up some ground.

“It really showed some resiliency on our team, especially after a tough first two games in the series,” Oliva, who had two triples, said of Wednesday’s comeback win. “We had a talk (Tuesday) night with Michael, if we really want to get back into this thing, we had to take this game. Heading on the road to Bowie (today), we needed some type of momentum.”

The Curve appeared to be cruising toward that momentum, up 4-0 after four innings and with reliable lefty Brandon Waddell on the mound.

But Trenton got a run in the fifth, then scored four in the sixth to stun the Curve and take a 5-4 lead.

Altoona missed on some opportunities after that, and it was starting to look like the club was on its way to another crushing loss.

Oliva led off the eighth with his second triple of the night, then Logan Hill smacked a tying single. Blight Madris couldn’t get down a sacrifice bunt and struck out trying, but Robbie Glendinning lofted a single into shallow right just over second baseman Hoy Jun Park.

Hill got a terrific read on that bloop single and took off immediately, which allowed him to get from first to third. That made all the difference, too, because Hill scored when the next batter, Jerrick Suiter, hit a grounder to third that Trenton got a forceout at second base on but no double play.

“My plan going up there is to do everything I can to score that run,” said Suiter, who fought off an 0-2 pitch for the go-ahead RBI groundout. “It wasn’t exactly how I wanted it to happen, but it happened, and we got the win.”

Had the Curve held on to that early 4-0 lead and won comfortably, it certainly would have been welcome.

But the way they wound up winning the game, in comeback fashion while on the brink of losing, probably did much more for the team from a momentum standpoint.

“Winning 4-0 would have been nice,” Oliva said. “But for the team to come back like this really just shows we’ve got that spark, still got that energy and those quality at-bats late in games.”

The club showed a great deal in the way it bounced back from Tuesday’s tough 4-2 loss and critical comments by Ryan.

“A lot of guys, we took that talk (Tuesday) night to heart about if we really want to get back in this thing, we really believe we can win a championship here,” Oliva said. “With the guys we’ve got, the talent we have here, the guys just want to win. We realize our potential, but it’s just a matter of consistently playing each night that way.”

Key play: The Curve scored twice in the eighth to win, sparked by a leadoff triple by Oliva and tying hit by Hill. 1B Jerrick Suiter then drove in the game winner on a groundout.

Key stat: The Curve enter this big four-game series at Bowie in third place in the Western Division, 4 ¢ games behind the Baysox.

LEADING OFF: The Curve got a lot of confidence winning Wednesday going into this weekend’s big series at Bowie. Manager Michael Ryan knows his club will be ready for the big games. “These guys are so good at just staying in that game and focusing on that game,” he said. “When they get out of here, they’re going to get on the bus and focus on game one against Bowie. I don’t think they’re looking ahead at the whole entire weekend and how important this series is. That’s what makes them very good. Be where their feet are and just stay focused on that game.”

SAFE AT FIRST: RHP Angel German (3-3) got the win in relief for the Curve, while RHP Hames Reeves (3-2) took the loss in relief for Trenton. Matt Eckelman saved his 18th consecutive game this season with a scoreless ninth.

STEALING SECOND: SS Robbie Glendinning went 3-for-4 for the Curve, who only had eight hits but made the most of them with six runs. That was a stark contrast to Tuesday’s game when they scored just two runs on 13 hits.

ROUNDING THIRD: The Curve and Bowie have played just three times all season, with Altoona going 1-2 in those games.

HEADING HOME: Wednesday’s game was delayed 46 minutes at the start because of rain.