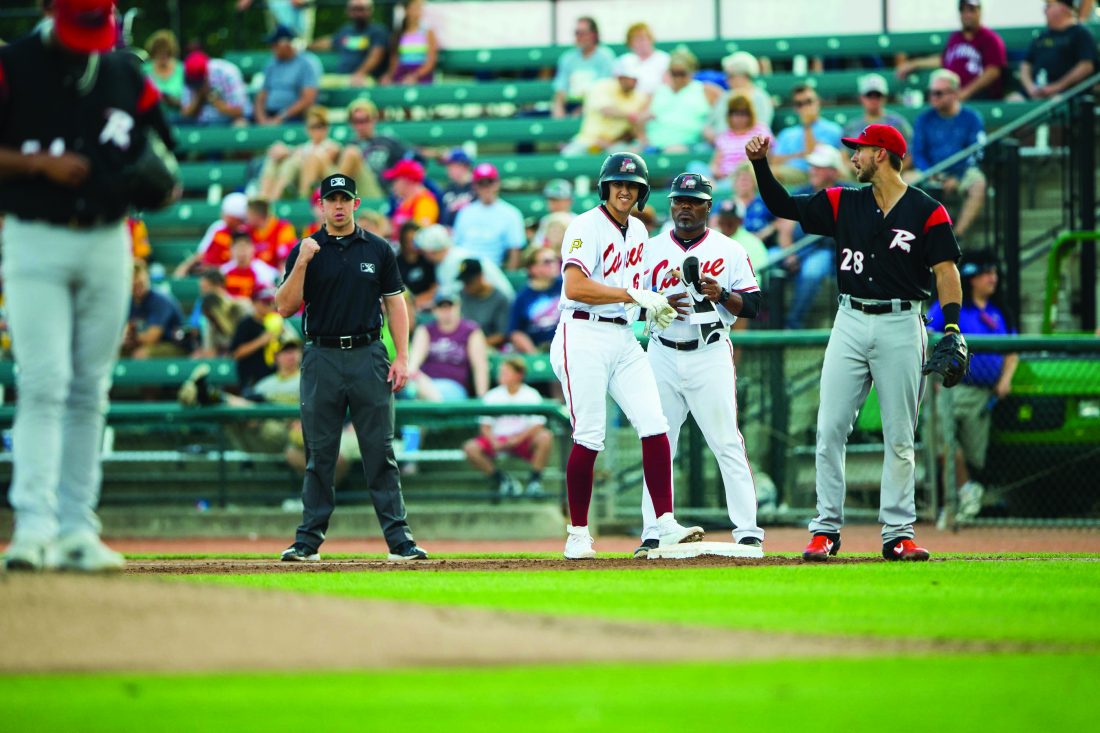 Photo for the Mirror by Rob Lynn Robbie Glendinning reaches first base safely on a single during Saturday night’s game.

Heading into the ninth inning of Saturday night’s ballgame, the law of averages suggested the Curve were probably going to win and snap their five-game losing skid.

But the great — or in Altoona’s case, not so great — thing about baseball is that sometimes the law of averages get thrown out the window.

Curve reliever Matt Eckelman entered the night having converted 26 consecutive save opportunities. He also happened to be facing a team with a league-worst .177 batting average in the ninth inning this season.

The numbers suggested Eckleman would work through the ninth inning relatively easily and pick up his 18th save of the season.

But nothing about the ninth inning was easy.

The second pitch of the inning was roped toward Curve left fielder Chris Sharpe, who got caught in between two hops and allowed the ball to skip past him and roll all the way to the wall.

Bryce Johnson made it all the way to third base and two batters later, he scored on a ball that was chopped over the head of Brett Pope at shortstop and into the outfield.

After the Curve bullpen threw seven straight hitless innings from the second to the eighth inning, the game was quickly tied in the ninth and the momentum shifted squarely to Richmond.

The game would go into extra innings and each team scored a run in the 10th inning, but it was the Flying Squirrels who broke through in the 11th inning and won by a final of 6-5 on Saturday night.

The Curve had chances to win in the ninth, 10th and 11th innings, but none bigger than with Robbie Glendinning at the plate with a pair of runners on base in the ninth.

“Once [Johnson] got onto third, the momentum swung dramatically and just led to the big ninth inning for them,” Curve manager Michael Ryan said. “We’re just looking for a guy to get a big hit and step up.”

Once again, no one came through on offense.

The team went 4-for-17 with runners in scoring position and stranded 13 runners on the basepaths, continuing an issue that has plagued Altoona for what feels like the entire month of July.

“It’s been about two and a half weeks now, where when you’re not executing and not playing well, those types of [plays] aren’t going to go your way and they haven’t been going our way,” Ryan said. “It’s another game where we sat on a lead.”

Even though the bullpen has had its struggles during the current losing streak that’s now at six games, Saturday’s loss wasn’t on the five guys who stepped on the mound for Altoona. Ryan’s fully aware of that.

“I don’t want a play to take away the job the bullpen did tonight,” Ryan said. “Sometimes when that happens and there’s runs on the board, you talk about well the bullpen didn’t do their job. There’s a bunch of plays behind them that we should’ve made tonight and we didn’t.”

Beau Sulser made the spot start and pitched well in what was a nice bounceback performance coming off his last two outings. The Eastern League All-Star went four innings and allowed just one unearned run on two hits. He also came through at the plate, recording two sacrifices, including a sacrifice fly that pushed across the Curve’s first run of the night.

“It felt really good,” Sulser said. “It was good to get back on track. I was feeling good because I put my team in a spot to win and we need [wins] right now.”

Sulser and the four guys who pitched after him all performed well enough to give the Curve a chance to win. But it’s hard to win when double digit runners are stranded on base each night.

“Our bullpen has been good all year,” Ryan said. “There’s just times, offensively, where you need to pick them up and we’re just not doing that right now.”

Key player: Curve shortstop Brett Pope registered his third three-hit game of the season, going 3-for-4 with an RBI and a run scored.

Key play: Richmond centerfielder Bryce Johnson rocketed a ball to left and got all the way to third base after the ball got past Chris Sharpe to leadoff the top of the ninth inning. Johnson came around to score the tying run two batters later.

Key stat: Matt Eckelman’s blown save was just his first since August 3 of last year. He had converted 26 consecutive save opportunities before Saturday night.

LEADING OFF: Brett Pope was one of the few players who came through with runners in scoring position as his RBI single in the ninth inning tied the game up at five and pushed the game to extra innings. He went 3-for-4 in the game and is hitting .333 during this latest homestand.

SAFE AT FIRST: Angel German made his first appearance after being reinstated from the suspended list earlier in the day. He pitched two scoreless innings and didn’t allow any baserunners, striking out one batter in the process.

STEALING SECOND: Despite having a much better overall record, the Curve are now just one game ahead of Richmond in the second half standings. But both teams are well out of the playoff race, sitting 9.5 and 10.5 games behind Bowie, respectively.

ROUNDING THIRD: Altoona suffered its first loss of the season when leading after eight innings. Prior to Saturday’s ballgame, the Curve were 41-0 when leading heading into the ninth inning.

HEADING HOME: The Curve’s current six-game losing streak is now tied for the team’s longest of the season. The team is now also two games under .500 for the first time in the second half.