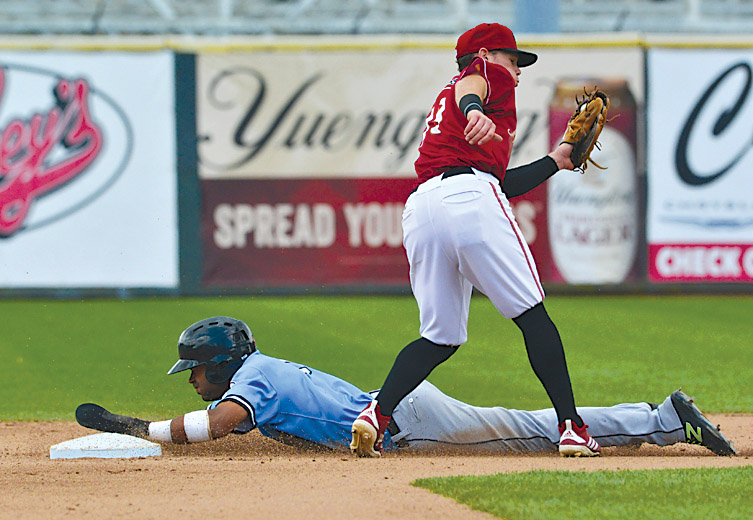 No team in the Eastern League has allowed fewer runs than the Erie SeaWolves.

From top to bottom, it’s hard to find a better overall pitching staff, and even though the Curve faced the SeaWolves for the 23rd and final time in 2019, it didn’t make things any easier.

Outside of a three-run rally in the ninth inning, Altoona’s offense delivered another disappointing performance in the 7-4 loss on Wednesday afternoon.

“You combine their arms with what they can do on the mound and we just didn’t execute so you’re not going to score runs when you put those two things together,” manager Michael Ryan. “That’s what happened in the series.”

The Curve were only outscored 15-12 over the course of these past four games at Peoples Natural Gas Field, but the team has been lacking that clutch hit for the majority of July and that culminated on Wednesday afternoon when the Curve went 1-for-6 with runners in scoring position.

“We’ve just gotta be smarter, knowing what the (pitcher) is trying to do,” right fielder Bligh Madris said of his team’s recent struggles. “We’ve got to be selective, but not too picky.”

Madris was one of the few Altoona players to do any sort of damage on Wednesday as his two-run triple in the ninth made his team’s statline look a little better.

There’s also not a whole lot of power coming from the Curve lineup as well. The team produced just two extra base hits on Wednesday and went all four games without hitting a home run. Erie, on the other hand, hit three homers in the series finale and four in the series as a whole. But it hasn’t just been this series that Altoona has been lacking that knockout three-run home run.

The team ranks second-to-last in the league in home runs this season and have hit just 11 as a team so far in the month of July.

“There’s a ton of balls that we’re hitting into the stands foul. We’re getting into a ton of good counts, we’re just not getting the barrel on it right now,” Ryan said. “We’re either swing and miss or we’re fouling it off. We had chances [Tuesday] night and with a guy on third with less than two [outs], we haven’t been coming through in those situations.”

Maybe it was a lack of energy coming off of a long night on Tuesday that resulted in the Curve registering just two hits through the first five innings. Playing a noon game less than 12 hours after a long doubleheader that featured a two and a half hour rain delay isn’t easy and it may be the cause of a lot of weak groundouts.

“That’s sort of the way it was in Bowie as well. It just feels like low energy,” Ryan said. “We’re getting into the later stages of July [and] we’ve got some tired guys. A lot of these guys haven’t played this much for this long and it’s something that they’re going to have to get through and get used to.”

Ryan’s roster does feature a handful of players that are getting their first taste of Double-A action this season and it’s no secret the jump from High-A is one of the toughest in professional baseball.

“At this level, guys are a little bit more crafty,” Madris, who is one of those first-year Double-A players, said. “Us first year guys are still learning and getting a feel for it. Some guys up here have a lot of experience, some guys don’t. That’s the mix that you get that makes it challenging.”

Key play: Pinero’s three-run blast to left field in the top of the eighth inning was the knockout blow for the Curve.

LEADING OFF: After missing his start over the weekend in Bowie due to a shoulder injury that caused him to leave his start last week, right hander Pedro Vasquez will return to the mount to start Thursday night’s ballgame, manager Michael Ryan said.

SAFE AT FIRST: Also making his return to the lineup tomorrow will be slugger Logan Hill. He left Monday night’s game early with what looked to be a left hand injury and missed the final three games of the series against Erie. But Ryan said he’ll be back in the lineup on Thursday.

STEALING SECOND: Domingo Robles tied his season-high in innings pitched with seven on Wednesday afternoon. He suffered the loss, allowing three runs on five hits, but bounced back from his rough outing in Bowie over the weekend.

ROUNDING THIRD: Infielder Robbie Glendinning appears to be hitting a wall during the month of July after a spectacular month of June that saw him hit .358 in his first 15 games back in Double-A. But so far in July, he’s hitting .195 with 30 strikeouts in 21 games.

HEADING HOME: Despite the loss on Wednesday, the Curve still won the season series against Erie with a 13-10 record against the SeaWolves.