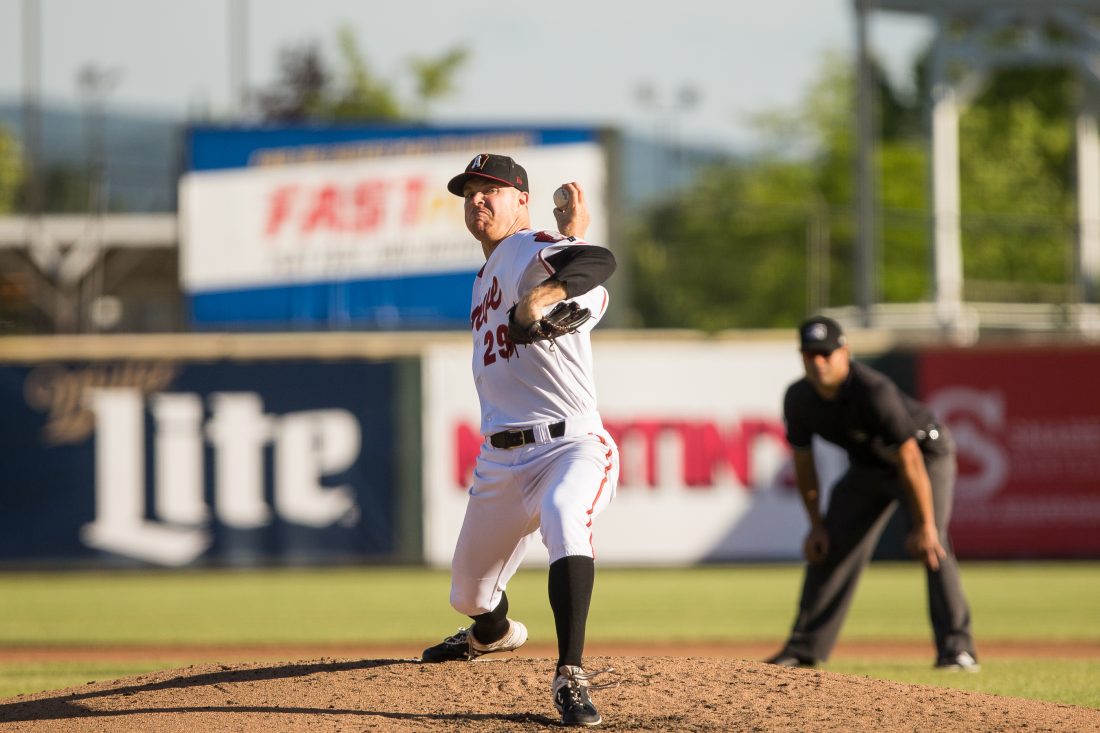 Every fifth home game for the Curve, fans in attendance might get confused during pregame warmups that a Marvel movie is about to start playing on the scoreboard in left centerfield.

But even though Captain America, Iron Man, the Hulk or any other member of the Avengers isn’t about to appear on the screen, everyone in attendance is going to be treated to a show at Peoples Natural Gas Field.

Because that intro video means one thing — James Marvel is on the mound for the Curve. And there aren’t a whole lot of surprises when Altoona’s No. 29 is out there.

“Each time he’s on the mound, you know that you’re going to be in the game and you have a very good chance of winning,” Curve manager Michael Ryan said.

“He’s built that confidence in us. He’s earned it,” pitching coach Joel Hanrahan added. “He’s gone out there and you know what you’re going to get. It’s nice knowing that you can put Marvel out there and he’s going to give you six solid innings, if not more, every game.”

During the Curve’s 7-5 victory over the Binghamton Rumble Ponies on Sunday evening, Marvel did the same exact thing he did throughout the entire month of June — deliver a winning performance.

After yet another impressive outing, he finished the month of June with a 5-0 record and a 2.21 ERA. Oh and by the way, he was named an Eastern League All-Star along the way.

“Those numbers don’t surprise me,” outfielder Jared Oliva said. “It makes us rally as an offense, especially to see a guy like that go the extra mile. He’s in here hitting on his off days, just trying to get any little edge that he can. That’s just what it’s all about and who he is.”

But Marvel could care less about his ERA, his strikeout-to-walk ratio or his WHIP. Wins for his team is what matters to him.

“The first thing that jumps out to me [statistically] is 5-0,” Marvel said on Sunday. “We’ve played some really good baseball as a team the last month and a half. To be able to go 5-0 [in June] as a pitcher, it just means I’m going deep into games and giving my team a chance to win. Like today, we were behind for the better part of [the first few innings] and I just try to go out and throw up some zeros and we put up a big inning.”

Altoona fell behind 2-0 in the top of the first inning courtesy of a two-run home run by former Curve outfield Barrett Barnes, but after that inning, Marvel looked like the pitcher we’ve become accustomed to seeing.

But this season — much like Marvel’s entire baseball career — hasn’t been smooth sailing.

He allowed six and eight runs, respectively, during back-to-back outings in May and his ERA had risen to 4.27. But he went to Hanrahan and vowed to be better.

“He ran into some trouble there after about four or five starts and then he came to me and said, ‘I’m going to put a stop to this.’ And he did,” Hanrahan said before Sunday’s game. “The guy goes out and works his tail off day in and day out. He’s probably one of the most prepared guys in the league and he’s taken ownership of his career.”

“Looking back on it, it was really just two starts for me,” Marvel added. “I started strong, had two really tough starts and ever since then, I think I’ve made some mental adjustments.”

According to Marvel, one of the biggest keys to his success this season has been the guy who’s been behind the plate for the majority of his outings, Arden Pabst.

The two spent time together in low-A West Virginia back in 2016 and now are roommates, both at home and when the team travels on the road.

“I’ve caught him a ton, definitely the most [in my career],” Pabst said. “We work really well together and he’s a heck of a competitor and he’s got really good stuff. I know what’s working one day and what’s not working one day.”

On Sunday, the pitch that was working well for Marvel was his two-seam fastball. After allowing the home run on his four-seam fastball in the first inning, Pabst and Marvel made the adjustment in the dugout and it was smooth sailing for the battery the rest of the game.

“Today, a little bit of a rough first inning with the home run,” Marvel said. “But we came in the dugout and made a small physical adjustment and went back and obviously threw up a ton of zeros in a row. Having guys like that helping me get better, hopefully I can continue with how I’ve been throwing.”

Marvel has certainly solidified himself as the guy atop the Curve rotation and his All-Star status is just further proof. But he never forgets the road he had to take to get to where he is now.

A 36th round pick out of Duke in 2015, Marvel missed the entirety of his final season with the Blue Devils and his entire first season of pro ball while recovering from Tommy John surgery.

“I’m grateful for everything I’ve gone through. I’ve gone through a lot of tough times, a lot of trying times,” Marvel said. “I’ve always tried to take the mental perspective that it was making me stronger as a player and a person. I try not to look at anything external in the league as far as where I am [statistically] as a pitcher. All I’m trying to do is win games for my team.”

Marvel is just one of a handful of guys on the Curve roster that has battled some type of adversity to get Double-A, but he and his teammates have put all of that behind them and are getting ready for a push for the team’s fifth consecutive playoff appearance.

Stats and All-Star appearances aside, Marvel just wants to be the guy that gets the ball for his team during those crucial moments late in the season.

“The most important thing and the thing I take the most pride in this game is how my teammates and coaches feel about me,” Marvel said. “When I come in the locker room, to know that I have the respect of all the other guys who are in there, that’s really what it’s about. To be a guy that they want on the mound, that’s the best feeling in the world.”

As the guy who delivered victories on Opening Day and to start the second half of the campaign, it’s not hard to imagine Marvel getting the ball as the Curve take the field in search of another Eastern League title in September.

“I’m getting goosebumps thinking about it right now,” Pabst said, thinking about he and Marvel starting a playoff game together. “I think it would be really exciting. A lot of people underestimated this team at the beginning of the season and we’re going to prove a lot of people wrong.”

Key player: Jared Oliva continues to shine in the three hole for the Curve, going 3-for-4 with a home run and a pair of runs scored in the game.

Key stat: Reliever Matt Eckelman picked up his 13th save of the season, which ranks him third in the Eastern League in that category.

LEADING OFF: Jared Oliva has emerged as a key cog in the Curve lineup in the absences of Logan Hill and Hunter Owen, who both moved up to Triple-A this month. He was back in the three hole again on Sunday night and went 3-for-4 with a home run to dead center field in the third inning. He’s now slashing .405/.479/.619 in 12 games as the No. 3 hitter in the lineup.

SAFE AT FIRST: “He’s just staying within himself,” Michael Ryan said of Oliva. “The work he’s put in is really starting to show. He’s a talented player and his work ethic is unbelievable. I’m happy to see some results.”

STEALING SECOND: The hero in the second game on Saturday night — outfielder Chris Sharpe — came up big again on Sunday. Sharpe’s grand slam in the fourth inning gave the Curve the lead and the team never looked back, scoring six runs in the inning and putting a stamp on the game.

ROUNDING THIRD: “Happy with the way we played,” Ryan said. “The first seven runs (we scored) were with two outs. That (fourth) inning could’ve came to a point where we didn’t score any (runs) and then Sharpe comes through.”

HEADING HOME: Reliever Matt Eckelman came in and pitched another scoreless ninth inning after three unearned runs crossed the plate in the eighth inning. He picked up his 13th save of the year and hasn’t allowed a run since May 27.

Ethan Stevenson tripled and drove in three runs to help Professionals Auto Body take the first game of the ...