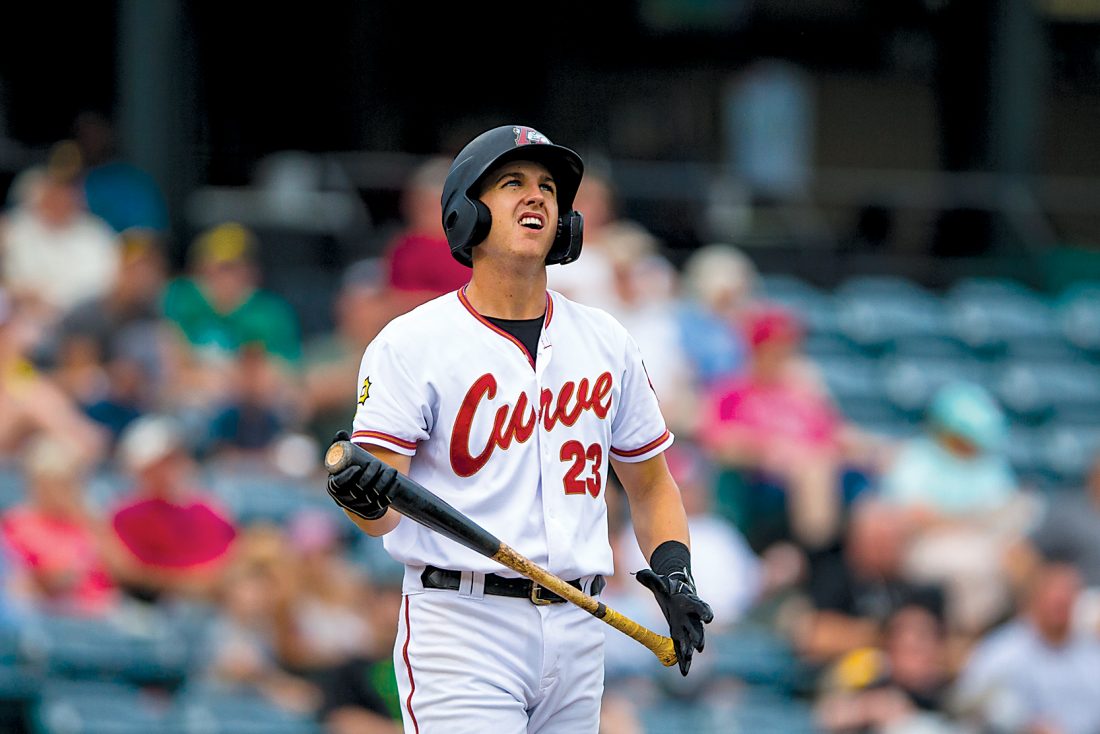 Photo for the Mirror by Rob Lynn Infielder Robbie Glendinning has made a big impact with the Curve since joining the team two weeks ago.

Major changes to the roster over the past two weeks have made the Curve a more interesting team, adding not only some promising young prospects, but also a couple of familiar veterans.

“What I’m excited about is we’ve got some really good players in the room right now, and we’re going to play some meaningful baseball,” manager Michael Ryan said.

The Curve had been playing very well until running into trouble with Binghamton the past couple of days. Still, the team figures to be in the thick of the playoff chase over the second half of the Eastern League schedule and will be trying to make the postseason for a fifth straight year.

If it does, many of the newcomers will have to play a big role.

Infielder Robbie Glendinning was having a monster season at high-A Bradenton and has continued to mash the ball since joining the Curve two weeks ago.

The 23-year-old Australian, a 21st round draft pick in 2017, has been in the middle of seemingly every Curve scoring situation since being added to the club. He entered play Saturday hitting .348 with three homers, 17 RBIs and a .989 OPS.

Glendinning was a surprise call-up to the Curve early this season after shortstop Stephen Alemais went down with a season-ending injury. Glendinning showed what he could do immediately, handling the big jump and hitting .300 in 10 games.

Glendinning knew he wouldn’t be staying with the Curve early on, since he was in low-A ball last year and understood he wasn’t going to skip high-A altogether. The Pirates made that clear to him, so when he went back to Bradenton, he did so with a lot of confidence.

“It definitely felt good knowing I could do something at this level,” he said.

“I knew I could get back up here, and I just had to show it.”

All he’s done is continue to impress since coming up to Double-A.

“Glendinning has had some unbelievable hits for us, especially with two outs,” Ryan said.

Outfielder Chris Sharpe came up from Bradenton a week after Glendinning and has been instrumental to the Curve offense. The 2017 14th-round draft pick was batting .292 with five homers, 30 RBIs, 17 doubles and an .836 OPS for Bradenton.

Sharpe’s early batting average with the Curve may not look all that great — .185 entering Saturday — but he has come through with big hits to spark the offense.

“Sharpe being here at the top of the order in the 2 hole has really helped,” Ryan said. “He came out and brought some energy. He’s a really good player and took some pressure off of some guys as far as like (Jared) Oliva.”

The Curve lost their best player, third baseman Hunter Owen, to Triple-A a couple of weeks ago, and of course he will be tough to replace. But Glendinning and Sharpe have helped carry their share of the load on offense.

The most promising prospect on paper to join the Curve recently is 21-year-old pitcher Cody Bolton, a sixth-round draft pick in 2017. He was sensational at Bradenton, going 6-3 with a 1.61 ERA and 0.859 WHIP in 12 starts.

Bolton made his Double-A debut this past week at Richmond and opened with four shutout innings before running into trouble in the fifth.

Bolton has a chance to be a legitimate ace to anchor the starting rotation the rest of the season.

As you may have noticed, Glendinning, Sharpe and Bolton all were drafted in 2017, so they’ve been able to move up together so far in the Pirates’ system.

“It feels good,” Glendinning said. “With Sharpe and Bolton, we’re all really good friends and bonded pretty well in Bradenton. So to come up kind of as a group and not be the only new guy is pretty refreshing. I guess it makes you feel more comfortable around the guys if you have people to lean on.”

Oliva has made good strides throughout the season in his first year in Double-A, and he said the infusion of good, young players has been a great addition to the club.

Like those other three, Oliva also was drafted in 2017, as was first-year Double-A outfielder Bligh Madris.

“We’re all part of the same draft class, so we all keep tabs on how each other is doing,” Oliva said. “Now that we have a good chunk of us up at this level, it’s really something special.

“It’s fun playing out there every day now. Not saying it wasn’t fun before, but we just have a different dynamic and have been playing really well the last few weeks.”

Along with the three newcomers up from Single-A, the Curve also have added two veterans recently who will be counted on to be leaders the rest of the way.

Shortstop Gift Ngoepe, signed as a minor league free agent after getting released in Triple-A by the Phillies, returned to the Curve lineup for the first time in four years Saturday. A sensational defensive player, he will help the young pitching staff by taking care of everything hit his way.

Two weeks ago, lefty Brandon Waddell was sent back to Altoona from Triple-A Indianapolis, where he was having a rough season pitching out of the bullpen. Waddell had never been a full-time reliever in his life until this season, and the transition didn’t go well.

Now he’s back starting with the Curve, and he’s always been an extremely reliable pitcher in the rotation.

Like Ngoepe, Waddell is a true professional who not only can lead by example on the field, but also show the younger players how to go about their business every day.

“Every aspect of the game we’re really good,” Waddell said of the Curve. “Quality starting pitching, bullpen’s been lights out, offense has produced a lot of runs, defense has been good, as well. So when you’re playing all-around good baseball, it carries its own momentum.

“That’s what I’ve seen here. We’re having a good time. A lot of guys that are hungry to play, enjoy playing, and I think it shows out on the field. … It’s a good environment and good clubhouse to be in right now.”