Ryan not around to see Curve defeated 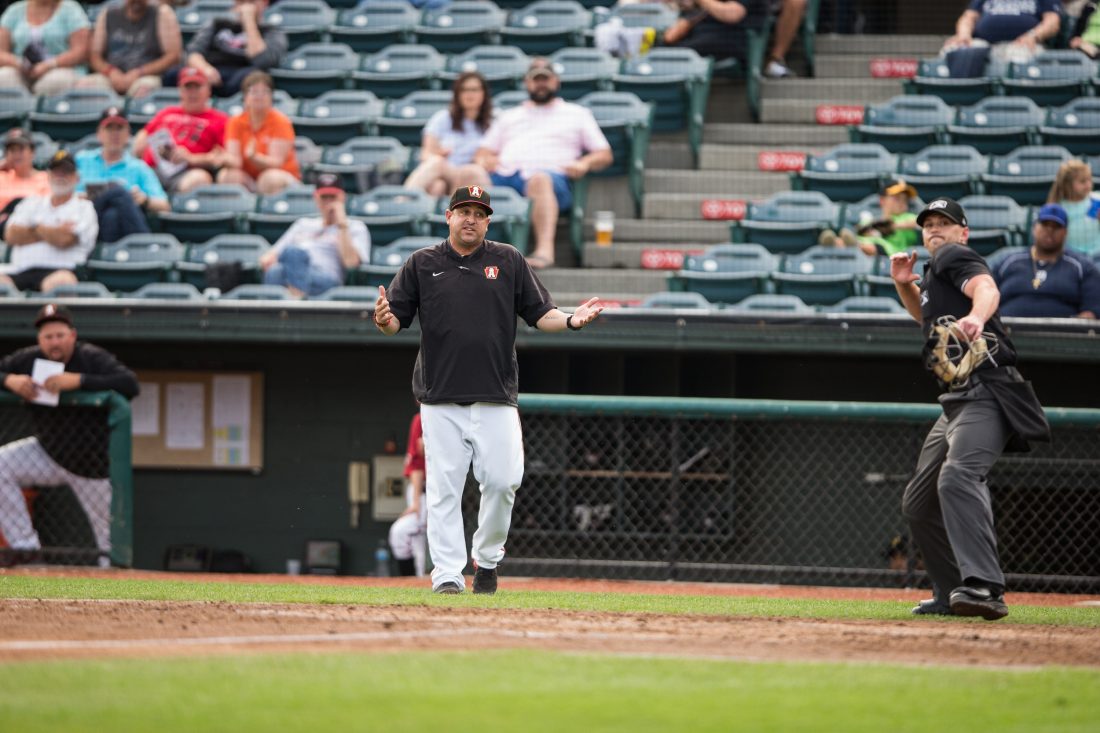 The Eastern League’s switch to a split-season format this year worked out great for the Harrisburg Senators, who have been far and away the league’s best team so far.

The first half winds up today, and the Senators are guaranteed a postseason berth after clinching the Western Division title six days ago.

“They were the best team in the first half, and it’s well-deserved that they won it,” Curve manager Michael Ryan said. “They’ve got a really good club, and they’re going to have a good club for the whole season.”

Ryan didn’t get to see much of his team’s 4-2 loss to Harrisburg on Monday before 2,507 fans at Peoples Natural Gas Field. The manager was ejected in the third inning after a bizarre sequence that saw the Senators score a run amidst some confusion by the umpires (see covering the bases for more on that).

Ryan is good friends with Harrisburg manager Matt LeCroy, having played together for years with the Twins. LeCroy has led the Senators to their first playoff berth since 2013, when he also was the manager before leaving for a couple of seasons to work on the big league staff with the Nationals.

“If there was going to be a team besides us to win the first half, I was hoping it would be Matthew,” Ryan said. “He does such a great job. … He’s such a good manager, and I’m just happy for him.”

Harrisburg got off to an incredible 16-2 start and coasted to the first-half title in the Western Division. The second-place Curve are 6 ¢ games back, and third-place Akron is 7 ¢ back.

The Senators have gone 26-25 since their hot start, but they still were never challenged.

“We played extremely well, especially the first six weeks of the season,” LeCroy said. “We won a bunch of ballgames by pitching and defense and timely hitting. It’s just a good group of guys, and they deserve it.

“It feels good to know you’re in (the playoffs).”

Harrisburg has had good teams many years, but they hadn’t made the playoffs in six seasons, in large part because the Nationals would make a lot of roster moves that hurt the Double-A club in the second half. When that happened, it’s generally allowed the Curve and Akron — the two perennial powers in the Western Division — to take over in the standings.

The way the Pirates operate in Double-A has been beneficial for the Curve in a full-season format, because the club has been good enough over the grind of an entire five-month season to earn a playoff berth.

Time will tell if the split-season format works out for the Curve with regards to reaching the postseason. This season, it’s benefited the Senators by rewarding them for their hot start.

LeCroy agreed that the split-season format can be good for Harrisburg going forward.

“I think so,” he said. “When your big league club is competitive every year, they’re going to use everybody they can. In the minor leagues, unfortunately, you’re going to lose a lot of guys.”

Case in point, the Nationals frequently call up players directly from Double-A to the major leagues. The Pirates never do that with the Curve.

“No doubt about it, we probably send more guys to the big leagues than our Triple-A team,” LeCroy said.

LeCroy said the split-season format is good with the way the EL operates now.

“When I first started managing here it was a lot different,” he said. “You didn’t see a lot of movement. And now the last few years I’ve been back (since 2016), the league changes so much now, guys move up so quickly, you don’t see guys stay here the whole time.

LeCroy isn’t concerned about his team suffering a dropoff in the second half after already clinching a postseason berth.

“No, because of the guys we’ve got in that clubhouse,” he said. “We’ve got some leaders that came up from Potomac that were part of a winning team, and I’ve got some veteran guys here that want to prove that they can get back and pitch in the big leagues and play in the big leagues. I don’t concern myself with a letdown. They go out and play hard every night.

“I told them that when we celebrated the other night that we’re going to do whatever we can to win every game, and that’s including all the games in the second half.”

Key play: The Senators escaped a bases-loaded jam in the bottom of the ninth to hold on for the win.

Key stat: The Curve (34-32) are guaranteed to finish the first half with a winning record with today marking the final game.

LEADING OFF: LHP Brandon Waddell has rejoined the Curve from Triple-A Indianapolis and will start tonight. Waddell has had a lot of success in Double-A, but he had a rough go of it with Indy this year. Pitching in relief for the first time in his career, he was 1-2 with an 8.70 ERA in 21 appearances. “Hopefully he banks on (his past Double-A success),” Ryan said. “I know that there’s been some struggles this year, but it’s our job to get him back, and we’re going to do everything we can to try and get him back to Triple-A.”

SAFE AT FIRST: Cambria County Commissioner Tom Chernisky filled in as the 3B umpire Monday because the regular Eastern League ump was ill. Chernisky has been a fill-in many times over the years. However, he was involved in a controversial play in the third inning. Curve CF Bralin Jackson dove to make a catch, and Harrisburg’s Luis Sardinas tagged and scored from third on the sacrifice fly. The Curve appealed that the runner left third early, and Chernisky initially ruled the runner out. He was overruled, though, by plate umpire Aaron Higgins, who called the runner safe.

STEALING SECOND: After that play at third, Ryan came out and argued and got ejected.

ROUNDING THIRD: Former major league LHP Johnny Venters pitched the sixth inning for Harrisburg and allowed one run on two hits. He had a 17.36 ERA in nine outings for the Braves this season before getting released. The Nationals signed him to a minor league deal in late May.

HEADING HOME: LHP Sean Brady (2-7) gave up four runs — two earned — in six innings to lose for the Curve. LHP Ben Braymer (4-4) allowed one run in five innings to win. RHP Aaron Barrett allowed the Curve to load the bases in the ninth but struck out C Jason Delay to end it and earn his 13th save.

HARRISBURG -- The governing body for Pennsylvania school sports on Friday delayed making, for at least two weeks, a ...

Glendale looking forward, not back

Lions’ Parsons makes it official with opt out

Sheetz organizers happy to get event on to the links