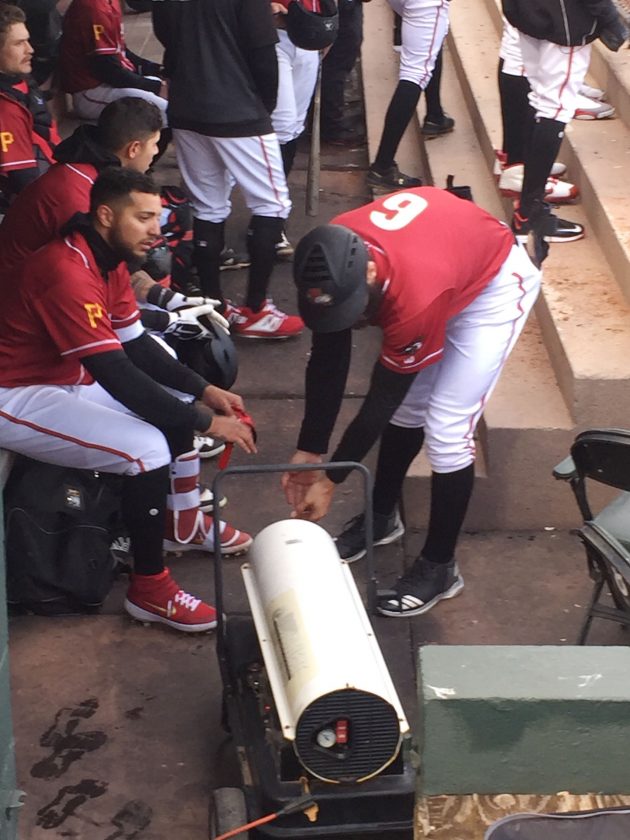 It was a scene and an evening many people around here waited so long to see, and folks on hand that night 20 years ago say they’ll never forget it.

Monday marked the 20-year anniversary of the first Curve home game ever, a contest against Bowie on April 15, 1999. The spectacle on that rainy night at then-named Blair County Ballpark felt like history in the making, and sure enough, looking back all these years later, that was indeed the case.

“It was a grand night for the city,” Tom Martin, Altoona’s mayor in 1999, said Monday. “It felt like we were a big-time city. We now had a professional baseball team, affiliated with nobody less than the Pittsburgh Pirates.

“It was a delight to be there.”

Monday’s 20-year anniversary game was a cold and bleak night, drawing only 2,171 fans to Peoples Natural Gas Field, and the Curve lost to a slugging Harrisburg team, 4-2.

Working the scoreboard in the press box for Monday’s game was Chris Strawmier of Altoona, who has fond memories of that first home game in 1999.

“I remember being really excited for the fact that we had minor league baseball here and they were a Pirates affiliate,” Strawmier said. “I just soaked it all in.

“I remember the rain delay, and there’s no way we weren’t coming, no matter what.”

Bad weather was in the forecast all day, but fortunately, the Curve were able to get the game going that night. There were dignitaries on hand from across the region and state, from politicians to members of the Pirates organization, and no one wanted to see the historic opener rained out.

“I remember pulling the tarp about 10 times, and it was about 28 degrees that day,” current Curve chief operating officer David Lozinak recalled. “Snow, ice, sleet, we had it all.”

All of that put first-time minor league general manager Sal Baglieri in a tough spot for the home opener.

Once a game starts, it’s in the umpire’s hands about when to rule for a delay or to call off things entirely. But prior to the game, the home general manager is in charge of the decision to play or not.

“It was a really dull day, rained all day very slow,” Baglieri, still a part owner in the Curve, said Monday. “We had buses and people coming in and a lot of things we were trying to handle or put together. (Owner Bob Lozinak) was concerned about a lot of fix-it stuff that was going on in the stadium. I was just worried about what was happening with regards to the weather.”

Baglieri recalled the situation leading up to the start of the contest.

“So, I’m standing there, and they say, ‘Sal, are we going to play today?’ And I look at them, and I look at Bob, and I said to them, ‘You’ve got to be kidding me.’ I said, ‘After we build a multi-million dollar stadium, we have everybody in the world here, we’ve got the press here, and you’re asking me if we’re going to play baseball? What the hell else are we going to do here?’ And that was the end of the conversation.”

The game did start, drawing a sellout crowd of 6,171 fans. And luckily, Mother Nature held off her cruel intentions for the evening for a couple of hours.

But come the seventh inning, the skies opened up with a lot of rain, and the umpires called for a delay. It lasted 57 minutes, and many fans who were there at the start decided to head home.

But the skies did clear up, play resumed, and the Curve beat Bowie, 6-1, behind two-run homers from Garrett Long and Craig Wilson.

A pitcher by the name of Bronson Arroyo started that game for the Curve and tossed 5 1/3 scoreless innings for the win. Maybe you’ve heard of him?

That’s a joke, of course, because Arroyo went on to cement his Curve legacy by pitching in the major leagues for 16 years, and his 15 wins in 1999 remain a club record. He lasted longer in pro ball, by far, than any member of that original Curve team, pitching all the way up until 2017.

There were some who wondered if the Curve would be successful for this long, but here the franchise is in its 21st season.

“I never figured it would, really, when it first started, and a lot of other people didn’t either,” said usher Mike Macovitch, who was working that first home game 20 years ago and still works at the ballpark all these years later.

Why have the Curve been so successful?

“It’s the management that’s kept things moving, and of course the good players they’ve had and the fans,” Macovitch said.

A big reason, as well, has been the affiliation with the Pirates, which almost didn’t happen because Erie also was in the running to be a Bucco farm team.

“I was very excited about seeing the players come through that we were going to see playing for the Pirates,” Strawmier said. “And I no idea what was involved, so I was very excited to see what that was all about.”

And if the Curve had not become a Pirates affiliate?

The Curve have remained very popular, though, drawing more than 4,000 fans every season of their existence, despite being in the second-smallest Double-A market.

Put another way, the Curve last season averaged 3.6 percent of their overall metropolitan market per home game, which is more than double any other Double-A franchise.

“I think having the team here for 20 years shows you how important it is and what it means to the community,” Curve manager Michael Ryan said.

“To be able to have a team last for 20 years is a huge accomplishment, and to have a successful team here, it’s very important to the community. You go around wherever you go, and people ask you if you’re with the Altoona Curve, and that makes you feel special and proud to be a part of it.”

LEADING OFF: Harrisburg clubbed four solo home runs in beating the Curve, 4-2, Monday night. Rhett Wiseman hit two homers, giving him eight this season, while Drew Ward and Chuck Taylor had one apiece. The first-place Senators are 10-2 and have 20 homers this season, to just seven for the Curve, who have lost three in a row.

SAFE AT FIRST: “That’s a dangerous lineup over there,” Curve manager Michael Ryan said. “You’ve got to keep the ball down and try to get them to hit some groundballs into some shifts.”

STEALING SECOND: Still, Ryan felt his pitchers had a solid night on the mound. “To be honest with you, I thought we did a really good job tonight,” he said. “We mixed speeds. (James) Marvel had a pretty good start, he just threw a lot of pitches. Four solo homers. You just try to limit the home runs to where it’s not the three-run homer because that’s where it can get pretty ugly pretty quick. … So it’s almost like you’re OK with the solo home run. But when there’s four of them, that’s tough to get past.”

ROUNDING THIRD: Vicente Campos (1-1) took the loss in relief for Altoona, while Mario Sanchez (2-0) won in relief for Harrisburg.

HEADING HOME: Marvel gave up one run on four hits in four innings, striking out six with one walk.