Curve in the middle of a four-game skid 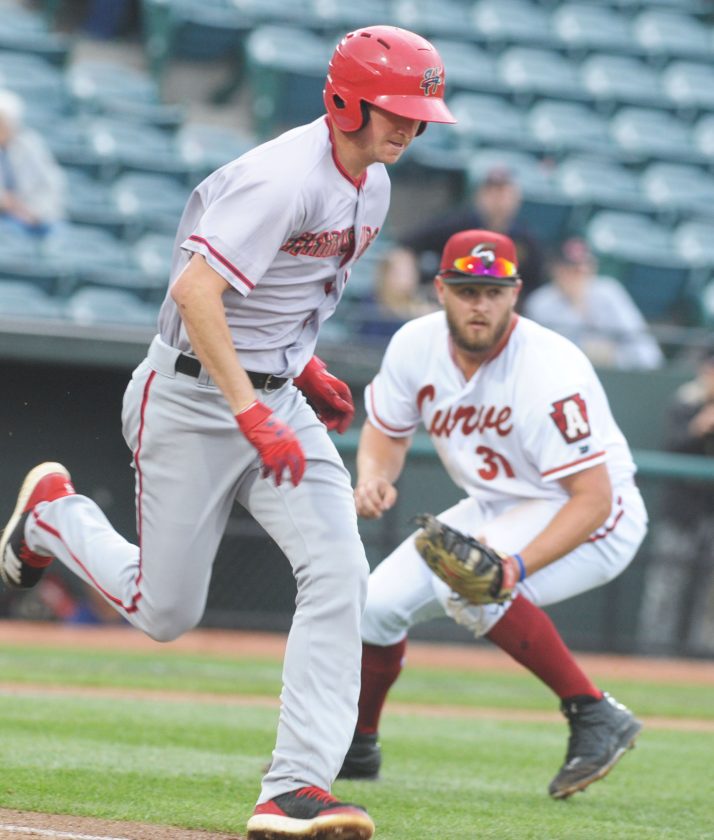 A lot of ups and downs were expected with this year’s Curve team, given the makeup of the roster, and the club has certainly gone through some big swings the first two weeks of the season.

Altoona started 5-0 with a historic four-game sweep at Akron. But the team has been brought back down to earth over the past week, and Tuesday night it lost for the fourth time in a row, 2-1 to Harrisburg, before 2,794 fans at Peoples Natural Gas Field.

“Not a surprise,” Curve manager Michael Ryan said of the learning curve with this group, particularly offensively. “You’ve got some younger players that are new to the league, and you see in the past it takes some adjustment to the new league, especially being at an upper level for the first time in their career.”

The Curve, who have dropped six of seven to fall back to .500, are running into what appears to be a very good Harrisburg team this week. The Senators are off to a sizzling 11-2 start for the best record in the Eastern League, and they know how to win games while boasting both a strong offense and pitching staff.

The Curve’s pitching staff has been good and figures to keep the team in games every night. But so far the offense has been inconsistent, which again, was to be expected.

“Our rotation has done an outstanding job keeping us in each game,” Ryan said. “Bullpen’s been really good. We’ve been giving up some runs late, but that’s not happening often.

“The difference is just what we’re doing at the plate right now. We’re late on fastballs, at the moment we’re just a little overmatched. We’re facing some veteran pitching that’s taking advantage against our younger hitters. It’s going to take some time. We expected that coming into this season with the league as far as the adjustment period, and that’s what we’re going through right now.”

The Curve managed just one run Tuesday, and it scored on a bases-loaded walk drawn by pitcher Dario Agrazal in the fifth inning. That tied the game at 1-1, and Harrisburg won it with a leadoff double in the eighth that led to the go-ahead run.

During the four-game losing streak, the Curve have scored zero, one and two runs in three of the contests, while the other loss saw them push across seven runs but give up 10.

“There’s a lot of things I do like, as far as guys getting out there every single day going about their work, preparing every single day,” hitting coach Jon Nunnally said of the offense. “Even though we get into certain situations with two-out RBIs, they find a way to get that done. We’ve just got to make sure that we hone in on the runners on third base less than two (outs), being able to get good pitches and use the whole field.”

There are some veteran Double-A hitters on this team, so that should help balance out the lineup. But overall, the offense is still looking for a level of consistency that can be tough to find in Double-A.

“We’ve got some guys that’s been here before, so that’s helping,” Nunnally said. “But the learning curve is going to take time over the course of the season. These guys are going to look back and they’re going to go, man, that was a little glimpse in my career, no big deal, I learned from that. And I think that some good things are going to be around the corner for these guys.”

The good news is that the pitching looks to be strong enough to compete night in and night out, which is all any team can hope for at any level of baseball.

“That’s a big benefit,” Nunnally said. “The pitchers have been doing it every single night for us. They keep us right there to where we always have a chance.”

“That’s what gets you excited each day because you know that you’re going to have a chance,” Ryan said of the pitching.

Erick Fedde (2-0) won for Harrisburg, giving up just one unearned run on six hits over seven innings. James Bourque worked the final two innings for his second save.

Agrazal had a strong outing, allowing just one run on six hits in six innings for a no-decision. Angel German (0-1) allowed the run in the eighth to take the loss in relief.

Key play: SS Luis Garcia led off the Senators’ eighth with a double and scored the decisive run on a sacrifice fly by 2B Adrian Sanchez.

Key stat: The Curve have lost four in a row and six out of seven.

LEADING OFF: The Curve play their first home morning game today at 10:30, an education day contest with school kids on hand. Morning games can be difficult, or they can be good after a loss. “It’s a tough game tonight, it’s a quick turnaround, so they have to be ready,” manager Michael Ryan said. “And sometimes when you leave the stadium, some players might have that linger. Tonight it shouldn’t. It’s a quick turnaround where you’ve got to get ready to play the next day, and it could be a good thing.”

SAFE AT FIRST: Ryan made a good point about how different things are at this level for newcomers. “(Monday) was their first National League game that they’ve ever been involved with, most of them, and it’s a different type of game,” he said. “You hear questions, and you hear conversations in the dugout, and it just hits you like, well they’re so new to this. It takes some adjusting. It’s part of the growing process for each of these players, and it’s only going to get better.”

STEALING SECOND: CF Jared Oliva came off the injured list Monday after missing time in the concussion protocol. He had an outfield collision in the first inning of the season opener at Akron, knocking him out of action for a week.

ROUNDING THIRD: SS Stephen Alemais and 2B Mitchell Tolman had two hits apiece for the Curve.

HEADING HOME: After this morning’s game, the Curve will head out for a six-game road trip to Richmond and Harrisburg. They’ll return home April 26 for a six-game homestand.