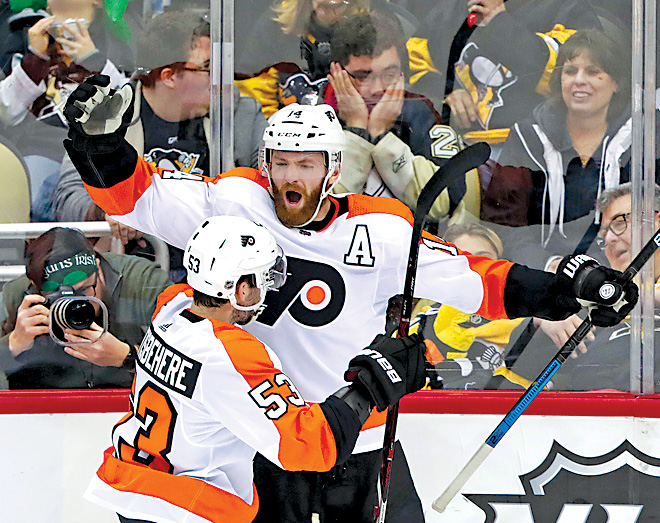 The Associated Press The Flyers’ Sean Couturier (14) celebrates with Shayne Gostisbehere after his game-winning goal.

PITTSBURGH — Clock ticking down on both the game and in some ways their season, the Philadelphia Flyers summoned some more late magic to stun the Pittsburgh Penguins yet again.

James van Riemsdyk scored with 18 seconds left in regulation to force overtime and Sean Couturier finished off a dazzling rush to beat Matt Murray with 3 seconds remaining in the extra period as Philadelphia capped an improbable comeback with a 2-1 victory on Sunday night.

The Flyers kept their fading postseason hopes alive by again surging past the Penguins for the second time in a month.

Three weeks ago it was two goals in the final 3:04 to force overtime before Claude Giroux’s winner with 1:59 to go in the 3-on-3. This time the deficit wasn’t quite as deep but time was far shorter when van Riemsdyk took a pass from Travis Konecny in the slot and ripped one by Matt Murray’s outstretched glove to push it beyond regulation.

“No lead is ever safe, it seems like,” van Riemsdyk said.

Not of late, at least when the Penguins are on the other side of the ice. The two teams took turns testing Murray and Philadelphia rookie goaltender Carter Hart in overtime and appeared headed for a shootout before Couturier banked a pass off the sideboard to himself, raced around Pittsburgh star Sidney Crosby then fired a shot from low in the right circle under Murray’s right arm and into the net for his 29th and perhaps most important goal of the season.

The win marked the first time in NHL history a team beat the same opponent multiple times in a season in games where they scored a tying goal in the final 30 seconds of regulation. Philadelphia moved within six points of Columbus for the Eastern Conference’s second wild card with nine games to go in the regular season. Odds are slim, but they would have been all but gone if van Riemsdyk hadn’t found room in the middle of the Pittsburgh zone.

“If we don’t win tonight, that’s a huge hole,” Philadelphia coach Scott Gordon said. “We’re definitely running out of time. It was a game that we definitely needed the two points and got a lot of big performances in the end there.”

Teddy Blueger, starting on the second line in place of injured Evgeni Malkin, scored Pittsburgh’s lone goal as the Penguins managed just one point out of a pair of home games during the weekend.

Pittsburgh’s stretch run might not include Malkin, who head coach Mike Sullivan said is “week to week” with an upper-body injury. Malkin collided with St. Louis defenseman Robert Bortuzzo in a loss to the Blues on Saturday. He remained in the game and played more than 19 minutes but just over 24 hours later his familiar No. 71 was nowhere to be found.

“He’s a tough guy to replace, he’s an elite player, that speaks for itself,” Sullivan said. “We’ll take it game to game and see how it goes.”

Murray, who was pulled after allowing four goals on 13 shots against the Blues, bounced back by making 36 saves but faltered late, as did the play in front of him.

“It’s tough,” Murray said. “Every point is valuable. It stings for sure.”

Facing Pittsburgh for the first time in his career, the 20-year-old Hart was spectacular. He turned away 41 shots — including several opportunities from in close — to win for the first time since returning from an upper-body injury that sidelined him from Feb. 23-March 11.

“For us to come back like that in the third period, it feels like we’ve almost done it in every game against these guys,” Hart said.

The Penguins begin a four-game road trip on Tuesday in Carolina.

The Associated Press PITTSBURGH — Jack Johnson’s goal into his own net was one of the low points of a ...

Former NFL Commissioner Paul Tagliabue has made the Pro Football Hall of Fame in his fifth attempt. Tagliabue and ...

PITTSBURGH — Mike Sullivan’s messages can be relentless. The Pittsburgh Penguins coach peppers his team with a ...

PITTSBURGH — Sidney Crosby stressed he wouldn’t try to get “too fancy” in his return from a two-month ...