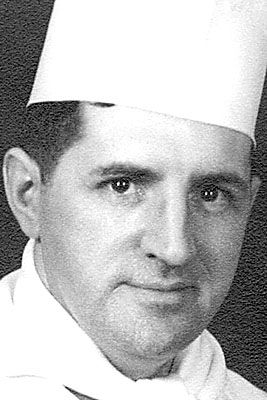 He was born in Leominster, Mass., the eldest son of Philippe and Bellona (Desserres) Allard. Following high school graduation, he served three years as a member of the U.S. Army Finance Corps, Panama Canal Zone, attaining the rank of corporal.

After discharge from the military, he earned his undergraduate degree at Assumption College in Worcester, Mass., then attended the Culinary Institute of Cornell University in New York. His subsequent career as a professional chef spanned more than 40 years, during which he worked in fine restaurants, resorts and country clubs in New York City, Washington, D.C. and New Jersey.

On May 24, 1954, Mr. Allard married the former Helena Julia Kovach of Central City, Pa. in Washington, D.C. She preceded him in death on Feb. 6, 2013. He was also preceded in death by four siblings: his brothers, Raymond and Eugene; and two sisters, Irene and Jeanne.

Surviving are his daughter, Adrienne Monique Allard of Altoona; and his brother, Henri Allard, of Leominster, Mass.

Stephane was of the Eastern Orthodox faith and a member of Ss. Peter & Paul Orthodox Church in Altoona.

He enjoyed stamp collecting, bird watching, genealogy and playing the violin. He was proud of his French-Canadian heritage and spoke French fluently. He was also proficient in Italian and Spanish.

In lieu of flowers, friends are encouraged to make donations in Stephane’s memory to the Orthodox Monastery of the Transfiguration, 321 Monastery Lane, Ellwood City, PA 16117.