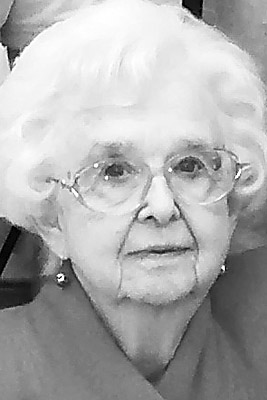 She was born in 1927 in Roaring Spring, daughter of Jacob and Ada (Miller) Frederick. On July 8, 1949, she married Robert Carper at the First Church of the Brethren, Roaring Spring. Robert preceded her in death on Dec. 4, 2001.

Surviving are two sons: David Carper and wife, Phyllis, of Townsend, Del., and Kenneth Carper and wife, Carol, of Naples, Fla., and Everett; two grandchildren, Mark Carper of Wexford and Amy Carper Crupi of Orlando, Fla.; two great-grandsons; and one great-granddaughter. Also surviving and very important to her are her surviving sisters-in-law and other relatives, most of whom live in Morrisons Cove.

In addition to her husband, she was preceded in death by her parents; two brothers: Richard Frederick and Wayne Frederick; and a daughter, Joanne Carper, on Oct. 28, 2017.

Doris was a 1945 graduate of Morrison Cove High School. In 1948 she earned a registered nurse degree from the University of Maryland. She had a long career as a nurse at Nason Hospital, as a private nurse in Morrisons Cove and more than twenty years as a nurse at the Morrison Cove Home (later the Village at Morrisons Cove), before retiring in 1989. She was a lifelong member of the First Church of the Brethren, Roaring Spring.

Doris loved travel, reading, good food and desserts. She agreed with her mother that there was nothing wrong with having dessert at the beginning of a meal as well as at the end. She especially enjoyed spending time visiting with her family and friends.

She found her greatest joy and fulfillment as a lifelong mother and best friend to her daughter, Joanne, who was born with serious mental and physical challenges. Doris visited, telephoned, and wrote cards to her daughter almost daily for more than forty years as Joanne matured and made her home in several family settings operated by Skills.

She was pleased that her health enabled her to live independently in an apartment at the Village at Morrisons Cove, where she’d spent most of her nursing career. It was there that she renewed a special friendship with Jim Beach, someone she had “dated” nearly seventy-five years earlier. Jim passed away in June, 2019.

Friends will be received from 10 until the 11 a.m. funeral service Wednesday, Jan. 22, 2020, at the First Church of the Brethren, Roaring Spring, Pastor Laurie Stiles officiating.