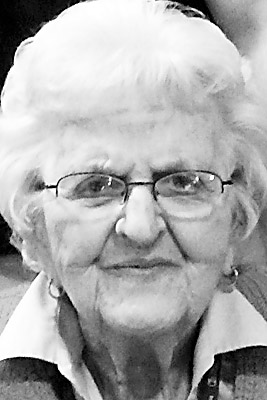 Betty Jane (Fortney) Babe, formerly of Tyrone and a guest of The Winds at Mattern Orchard, died peacefully in her sleep on Monday at the age of 105. She was a beautiful lady of dignity and grace who made you feel good just to know her.

In addition to her parents and husband, Betty was preceded by two brothers and two sisters and was the last of her immediate family.

From an early age, Betty was immersed in Christian traditions that would be her lifelong support. Following her 1933 graduation from Tyrone High School, she worked locally as a dental assistant where she met her husband. After their marriage, Betty became his secretary and scheduled all of his farm and emergency calls.

A voracious reader, Betty loved playing bridge, the piano (by ear), traveling around the USA with Carl, reading her Bible daily and nourishing those around her with love and her faith. She was a longtime active member of First Presbyterian Church of Tyrone, past president of the local service league, a member of the Tyrone Historical Society and a Rotary International Paul Harris Fellow.

At the age of 102, Betty moved from her home in Tyrone to an assisted living apartment at The Winds at Mattern Orchard where she enjoyed interacting with the residents and staff who made her feel like family during many excursions and various classes.

At Betty’s request, a funeral will not be held, but a memorial service will be scheduled at a later date in the springtime, with hopes of catching the daffodils in bloom. Arrangements are by Richard H. Searer Funeral Home Inc., Tyrone.

Contributions in Betty’s memory may be made to the Tyrone Snyder Public Library, 1000 Pennsylvania Ave., Tyrone, PA 16686.

Kansas finds itself back on top of poll