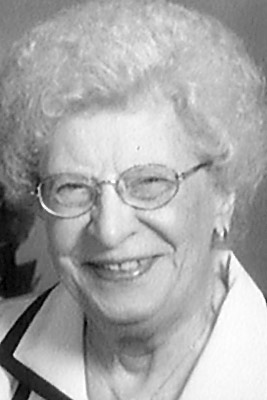 She was born in Smoke Run, daughter of the late John and Frances (Belin) Kolessy. She was the eldest of six children.

Surviving are two sisters-in-law: Janet Kolessy of Hollidaysburg and Lorraine Lindsay of Howard Beach, N.Y.; and many nieces, nephews and cousins.

Besides her parents, she was preceded in death by her beloved husband, Anthony Damico; three sisters: Jean Kolessy, Mina Korinchak, and husband, Cal, and Frances Beckwith; and two brothers: John Kolessy Jr. and Frank Kolessy.

Marie was a graduate of Tyrone High School, the College of St. Francis, Joliet, and the Catholic University of America, Washington, D.C. She was a Catholic educator for 46 years, serving in schools in Indiana, Illinois, Pennsylvania and Washington, D.C. She was a former member of St. Matthew Catholic Church, the Secular Order of Discalced Carmelites of Loretto, the American Legion Auxiliary and the National A.A.R.P.

Condolences may be expressed at bruggerfuneralhomes.com.