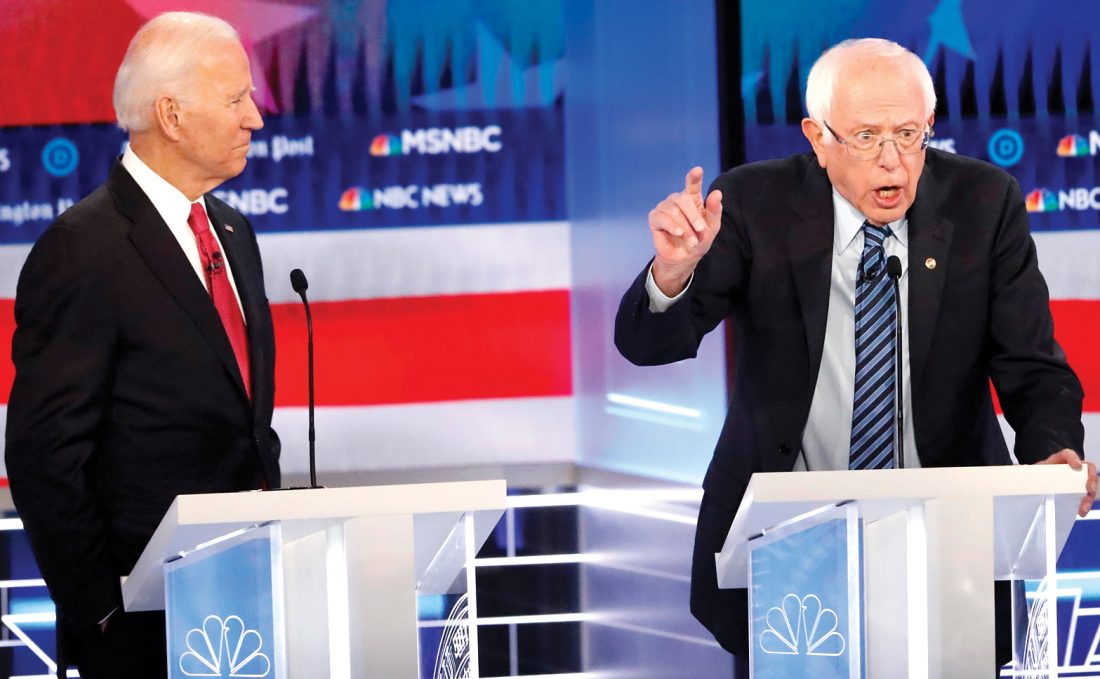 ATLANTA — The top Democratic presidential candidates are clashing over “Medicare for All” — again.

Like a string of previous debates, Wednesday’s prominently featured squabbles over a program that could alienate general-election swing voters who may be wary of fully government-run, universal health care and that will be extraordinarily difficult to get through Congress — even if Democrats take the White House and make significant 2020 congressional gains.

And yet, partly because it’s one of the few areas where the field has clear ideological divides, Democratic primary contenders can’t stop talking about it — and subjecting prime-time audiences to tying themselves in knots over the issue at debates.

Sens. Elizabeth Warren of Massachusetts and Bernie Sanders of Vermont, the race’s strongest progressive voices, defended Medicare for All, with Sanders saying, “Some of the people up here think we should not take on the insurance industry,” but adding, “I think now is the time.” Former Vice President Joe Biden said many people are happy with private insurance through their jobs, while Pete Buttigieg complained about others taking “the divisive step” of ordering people onto universal health care, “whether they like it or not.”

The debate came at a critical juncture for the Democratic Party — less than three months before the first voting contests and with big questions hanging over the front-runners. Some Democrats have grown worried about Biden’s durability, while others fear that Warren and Sanders are too liberal to win a general election.

Buttigieg’s rise made him a prime target as Biden, Warren and Sanders look to break out of a four-candidate bunch at the top with less than three months until voting begins. Buttigieg was asked early about how being mayor of South Bend, Indiana — a city of 100,000 residents — qualified him for the White House and said he was more than up to the challenge.

“I know that from the perspective of Washington, what goes on in my city might look small,” Buttigieg said. “But frankly, where we live, the infighting on Capitol Hill is what looks small.”

Minnesota Sen. Amy Klobochar interjected to say that having the nation’s first female president was well overdue, adding of the House speaker: “If you think a woman can’t beat Donald Trump, Nancy Pelosi does it every single day.”

In the moderators’ chairs were four women, including Rachel Maddow, MSNBC’s liberal darling, and Ashley Parker, a White House reporter for The Washington Post.

A clash erupted early between two candidates with relatively low polling who were looking for big moments: Sen. Kamala Harris of California and Hawaii Rep. Tulsi Gabbard, who has criticized prominent Democrats, including 2016 nominee Hillary Clinton.

“I think that it’s unfortunate that we have someone on the stage who is attempting to be the Democratic nominee for the president of the United States who during the Obama administration spent four years full time on Fox News criticizing President Obama,” Harris said.

But the discussion kept finding its way back to Medicare for All, which has dominated the primary — especially for Warren. She released plans to raise $20-plus trillion in new government revenue on universal health care. But she also said implementation of the program may take three years — drawing criticism both from moderates like Biden and Buttigieg, who think she’s trying to distance herself from an unpopular idea, and Sanders supporters, who see the Massachusetts senator’s commitment to Medicare for All wavering.

The latest debate also comes amid an impeachment inquiry consuming Washington — with testimony in the House continuing almost until the candidates took the Atlanta stage. The top Democrats running for president support Trump’s impeachment, leaving little room for disagreement.

New Jersey Sen. Cory Booker faced especially intense pressure since he’s yet to meet the Democratic National Committee’s polling requirements for the December debate in California. He spent several minutes arguing with Warren about the need to more appropriately tax the wealthy, but also called for “building wealth” among people of color and other marginalized communities.

In just about any other year, Juneteenth, the holiday celebrating the day in 1865 that the last enslaved black ...

New research shows how dangerous the coronavirus is for current and former cancer patients. Those who developed ...

Like dozens of other veteran spellers in their final year of eligibility, Anson Cook had big plans for this ...