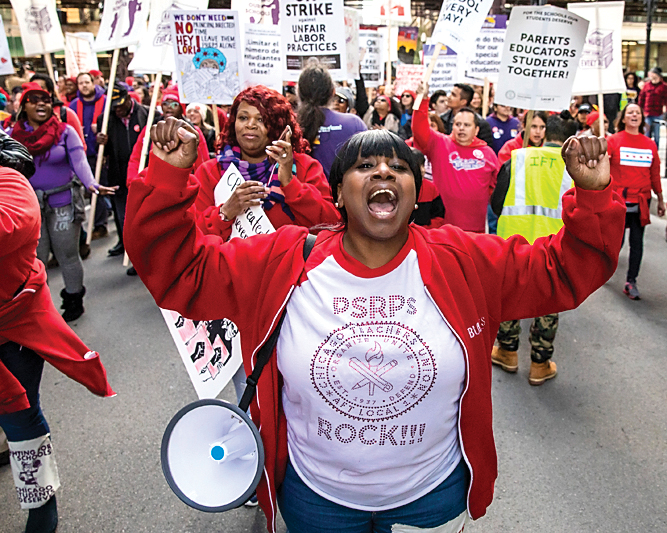 The Associated Press / Thousands of striking Chicago Teachers Union members and their supporters march through the Loop on Thursday.

CHICAGO — Striking teachers marched in picket lines outside hundreds of Chicago schools on Thursday after their union and city officials failed to reach a contract deal in the nation’s third-largest school district, canceling classes for more than 300,000 students for the duration of a walkout that seemed likely to head into a second day.

The strike in the nation’s third-largest school district came after the Chicago Teachers Union confirmed Wednesday night that its 25,000 members would not return to their classrooms. It follows months of negotiations between the union and Chicago Public Schools that failed to resolve disputes over pay and benefits, class size and teacher preparation time.

Union vice president Stacy Davis Gates said the strike will continue into Friday as a result of the impasse, and the school district cancelled a second day of classes.

Picketing teachers said Thursday the walkout was about getting more resources and smaller class sizes for students in the cash-strapped district, not about putting more money in their pockets.

Outside Smyth Elementary, a predominantly black and low-income school on the city’s near South Side, art teacher John Houlihan said “we’re not fighting for paychecks and health care. It’s the kids.”

“It’s ridiculous to say that you can put these kids who are dealing with profound poverty and profound homelessness in classes of 30-40 kids,” said Houlihan, who picketed with about 20 other teachers and staff as drivers passed by, honking their horns.

The strike is Chicago’s first major walkout by teachers since 2012. And just as that strike inspired unions in Los Angeles and other politically left-leaning cities to walk off the job and protest over issues such as class size and student services, unions nationwide are today watching closely to see how parents respond to a walkout based on a “social justice” agenda.

Mayor Lori Lightfoot said she was disappointed by the union’s decision to strike.

“We are offering a historic package on the core issues — salary, staffing and class size,” she said.

Lightfoot voiced frustration about what she sees as the union’s lack of urgency to make a deal. “So, what we need is for the union to come back to the table to bargain in good faith, spend the time actually getting a deal done, face to face with us, and not off to the side in a caucus,” she said.

The global coronavirus pandemic has created a huge need for health care in the U.S., but it also is delivering a ...

WASHINGTON — Federal Reserve Chair Jerome Powell is pledging to reveal the names and other details of the ...

US stocks rally on hopes for vaccine, economy

The stock market bounced back from its worst week in nearly two months Monday as optimism about a potential vaccine ...